Can we see the Russian Progress 59 spacecraft burn up on reentry?

Progress 59's orbit is decaying and it will soon reenter Earth's atmosphere. Will it be possible for observers on the ground to see it burn in the skies as it falls towards the Earth?

Progress-M 27M was (on date of writing this answer, see updates below) expected to decay around Thursday, May 7, 2015 at 23:01:00 ±8 hours UTC. This predicted reentry time will get more precise as it experiences atmospheric decay, additional radar tracking measurements are taken and object's TLE are updated. Eventually, it should be possible to predict its final burn-up in the atmosphere to within one orbit (or about ±43 minutes of an 87 minutes long final orbit at roughly 110 km altitude), but even then, due to many uncertainties, it will be impossible to say exactly over which area that will happen, until it actually does.

This image below shows all the areas where it's possible it will decay, based on latest prediction data. Opaqueness of bands represents greater chance of it happening there, with median predicted decay happening on the vehicle's southward leg, just over New Zealand (that doesn't mean it will decay over it, it could equally likely decay over the other side of the world, say over France or Germany): 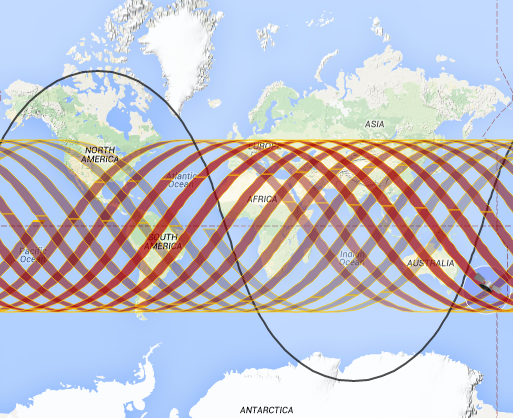 Assuming it reenters during night time, it should be fairly visible as it still carries all the supplies intended to be delivered to the International Space Station and most of its propellants, which could substantially increase visibility of its ionized trail. Some of its parts, especially the heavy and strong docking mechanism are also expected to impact on Earth and won't burn up in the atmosphere. For Progress spacecraft, this would normally have happened in a controlled fashion over large bodies of water, mostly East of Kamchatka peninsula in the Bering sea, and the vehicle would be more empty (basically its body, exhausted of propellants, with some waste produced on the station that's meant to burn on reentry) so there aren't any videos of it, and it's hard to compare how much more visible Progress-M 27M reentry could be.

Educated guess, if it enters on the night side of its orbit, and over or close to populated areas where it would be expected to be seen by observers on the ground, it could look quite spectacular and perhaps similar to how some ATV reentries looked like (though note that Progress is a much smaller vehicle with roughly half the payload mass that ATV were capable of delivering to the station). Here's how ATV-1 (named Jules Verne) reentry looked like:

If Progress-M 27M reentry happens during daylight, then it would obviously be less visible but might still produce visible trail of debris reflecting in sunlight, ionized trail and occasional explosions of its propellant and storage tanks and implosion of its hull. But most of this would happen still high in the atmosphere, with exception of a few heavier and stronger pieces of debris that might survive all the way to the ground.

Note that with current decay time uncertainty of 16 hours, chances of this happening over land are fairly slim. With Progress-M 27M's orbital inclination of 51.635°, there's only roughly 30% chance any of its surviving remains would impact terra firma. Conversely, that means that it's about 70% chance that final decay will happen over oceans and, unless that happens within ~ 1,000 km radius to populated land areas (estimated visible horizon for bright, low altitude objects), nobody would be there to see it, even if it would otherwise produce bright enough streak: 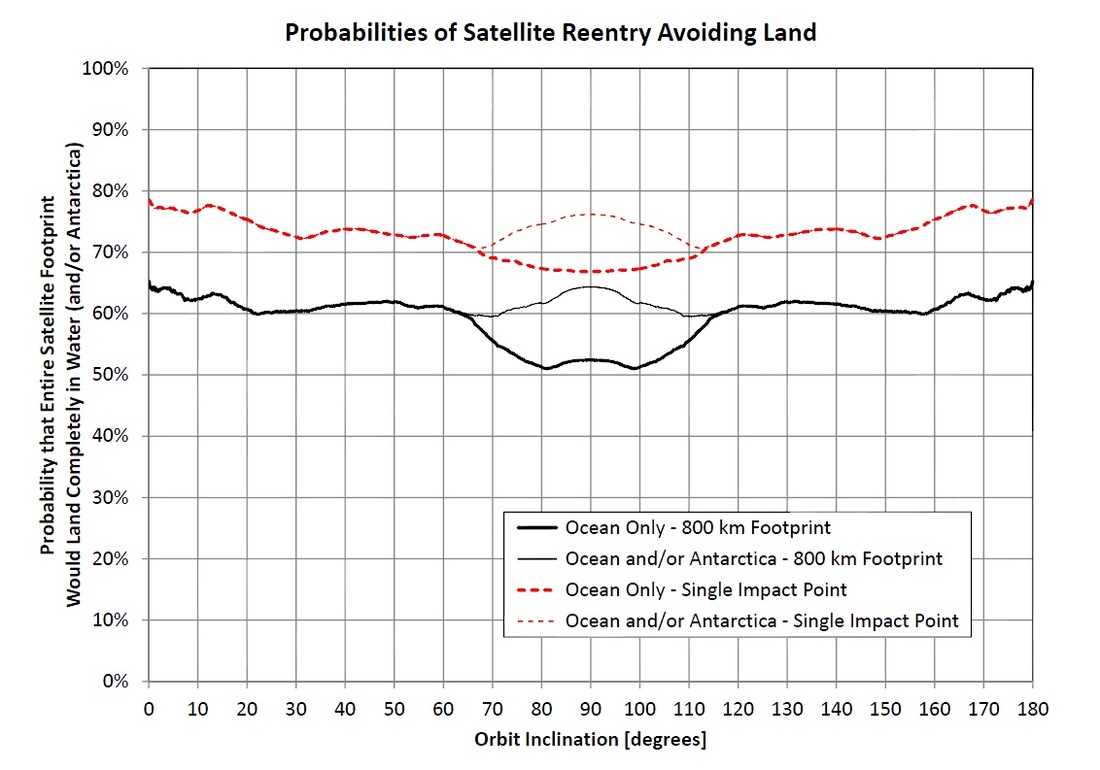 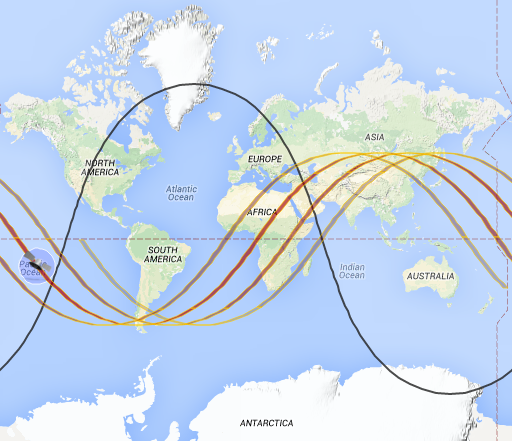 Image courtesy and made with Satflare reentry tracker.

This prediction puts median decay location in the middle of South Pacific ocean, on the southward leg of Progress-M 27M's orbit.

Update (May 8, 3:00 a.m. UTC): Satflare prediction from previous update was pretty much spot on. Roscosmos issued a quick statement that Progress M-27M reentered the atmosphere on May 8 at 2:04 a.m. UTC (5:04 a.m. Moscow time) over the Pacific Ocean. By my calculations, decay time should place it in proximity of Kiribati and Jarvis island, 2:04 p.m. local time.

Some sites are tracking this Progress-M 27M decay and you can read more about it there as events unfurl, for example Spaceflight 101 publishes regular updates.

Not the answer you're looking for? Browse other questions tagged spacecraft reentry observation progress orbital-decay or ask your own question.

8
Why is it so difficult to predict the exact reentry location and time of a very low earth orbit object?

13
How is the periscope port on Soyuz spacecraft secured for the atmospheric reentry?
12
Bounce off the atmosphere at reentry?
4
Why are deorbited satellites allowed a slow orbit decay instead of burning them up rapidly?
3
Is it possible to have a “figure-8” orbit around the Moon and the Earth, and perhaps always face the sun?
3
Is there a way to reproduce Earth-like gravity on a spacecraft close to a more massive body such as the sun?
5
How much G force is applied when correcting an orbit around Earth?
8
How is the docking hatch on the Progress/ATV opened?
1
What Earth satellite remained in orbit the longest before reentering?
4
Can you accurately control the reentry point by deorbiting with ion propulsion?