Why does Dragon 2 abort with the trunk attached?

In the Dragon v2 abort test yesterday, it lifted off with its unpressurized trunk in tow, then ejected the trunk at apogee. Is this the real abort profile? Wouldn't it be easier to pull away without the trunk?

If it's the real profile, why spend the fuel mass to save the cargo?

If not, how would the (impressive) acceleration of the initial test compare with a realistic scenario, where the engines are fighting drag but pulling less mass?

It's an aerodynamics problem. SpaceX has designed both of their Dragon capsules to be inherently stable for reentry; should the capsule not be able to orient itself actively due to a Draco engine failure - it will passively orient itself during reentry with the blunt heatshield pointing forward, into the velocity vector. This minimizes risk and ensures the heatshield is always facing into the atmosphere for descent. This is an inherent property of the truncated cone reentry body.

This design has one drawback however: if you have a scenario where Falcon 9 encounters a failure mode that risks the lives of the astronauts on board the Dragon, and you need to escape from the rocket, you want to do so as quickly as possible and encounter the least aerodynamic resistance as you can. This means you need to point nosecone forward, and heatshield back, which is precisely opposite to the aerodynamic design of Dragon.

The solution SpaceX chose was to keep the trunk on during the abort. Note that the trunk itself does not keep the capsule pointing forwards, but rather the fins on the trunk do. They sculpt the airflow around the capsule in such a way that it is stable nosecone forward into the velocity vector. 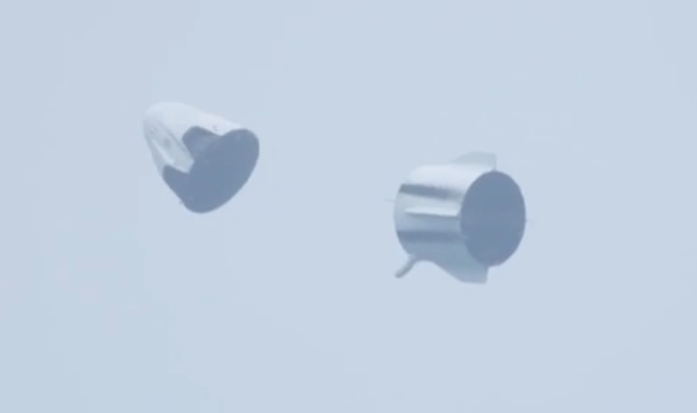 You can see all of this during the Pad Abort video. As soon as the trunk deploys and separates from the vehicle, the capsule immediately begins to rotate, trying to stabilize with the heatshield forward.

Additionally, the trunk is incredibly lightweight. Dragon weighs in at around 8000-9000kg. The trunk is less than 1000kg. A minor drawback, sure, but who cares when you're saving the lives of the crew inside.

I would also think that in a failure where the rocket either explodes or must be detonated, having the trunk attached might act as shielding from penetrating debris. There would only be a short window where that might be needed, and it would seem to coincide with the duration that the trunk remains attached.

I figured keeping the truck attached was an effort to put CG ahead of CP so Dragon is naturally stable flying forward under power. On it's own, Dragon wants to orient heatshield first. Note Boeing Starliner also has pusher abort system, but does not have a long trunk...

Not the answer you're looking for? Browse other questions tagged spacex abort dragon-v2 or ask your own question.

9
What is the orbit and expected lifetime of Crew Dragon trunk?
7
Is the Dragon Mono-Stable?
6
The aerodynamic stability of the truncated cone shape

5
How has the Dragon v2 been tested before its launch pad abort test?
6
Will Dragon V2 when crewed carry cargo in its trunk?
5
Why is the SpaceX Pad Abort test starting at ground level?
4
Does Dragon v2 only have Superdracos as an abort system?
13
When is the Dragon V2 abort system armed?
2
Could the Dragon 2 abort after trans-lunar injection?
9
What is the orbit and expected lifetime of Crew Dragon trunk?