How do you weigh things in a micro-gravity environment?

Obviously a balance scale is not going to add value to the task in free-fall. Weight in space is more accurately described as mass, but the need to define it still exists. Regardless of if you're doing scientific experiments, mixing ingredients, or calculating mass to thrust values for delta-v, you need to know the mass or weight of things.

So how do you figure out the mass of an object, if you can't use a balance scale?

For pretty precise measurement you use linear acceleration of the body with fixed force (say, spring pulled until its force reaches nominal value) and then you measure its speed when launched.

Kinetic energy $ E={{1}\over{2}}mv^2 $ will be equal to potential energy of the "launcher" (which can be easily calibrated by launching an object of known mass and measuring its speed using the same assembly).

For example, assume the launch assembly is $ 5 kg $. You launch $5 kg$ weight out of the assembly and measure the distance it travels over the course of 1 second. It goes $ 10 m/s $;

that's the force of the assembly.

You can basically use all effects, that depend on the mass of an object. Spring pendulums, some magic with centrifugal forces, angular momentums .....

There is some really cool website by NASA, which provides some nice insight and an experiment, which demonstrates an option of how it can work: http://quest.nasa.gov/space/teachers/microgravity/4inert.html 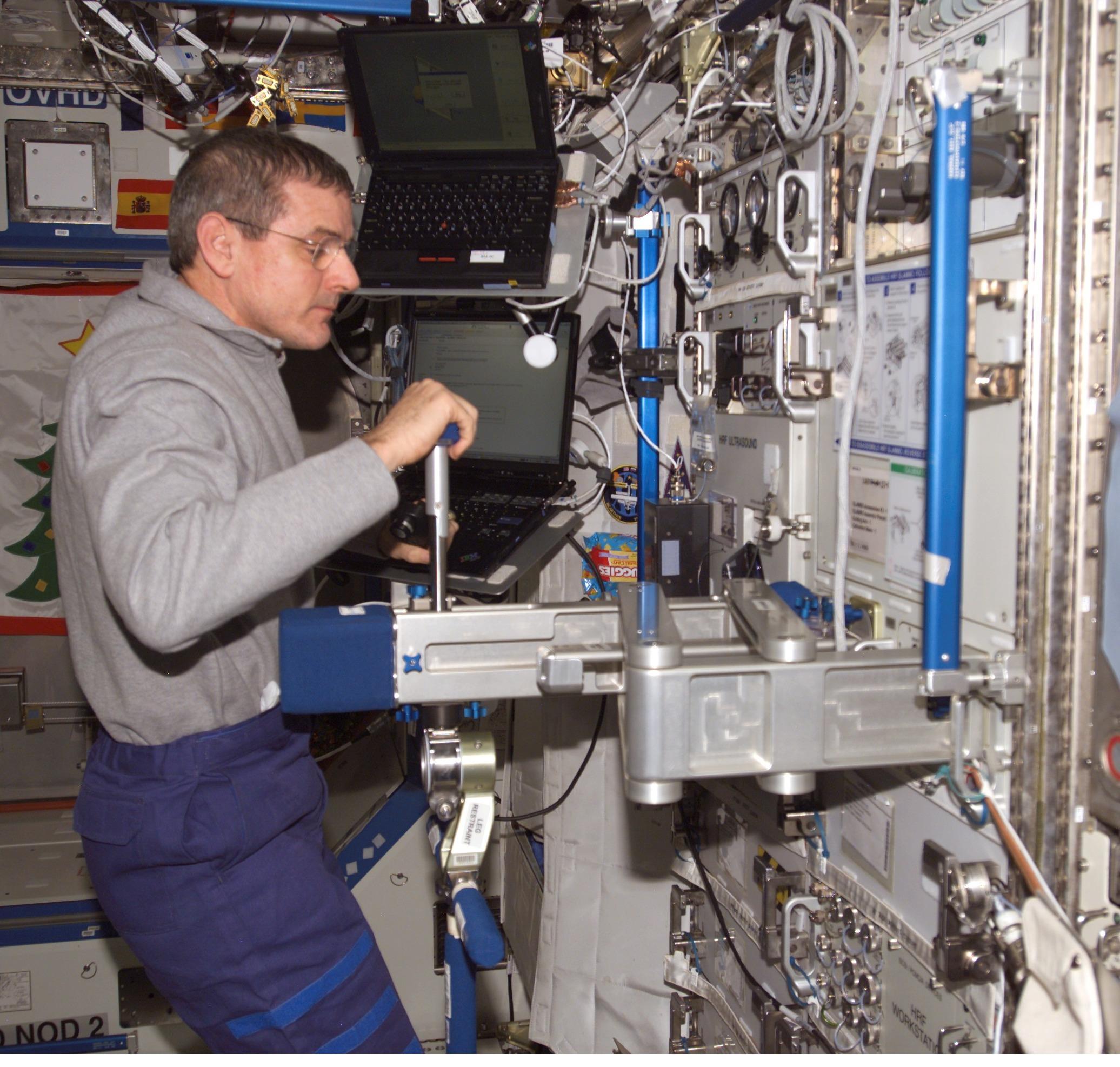 A quick search through the space agencies' sites yielded this photo of the IM-01M mass measuring device in the Russian orbital segment:

Anatoly Ivanischin undertakes periodic weighing of his body on the "Mass measuring" device. Credits: Roscosmos. The likely author of the photo is Anton Shkaplerov. 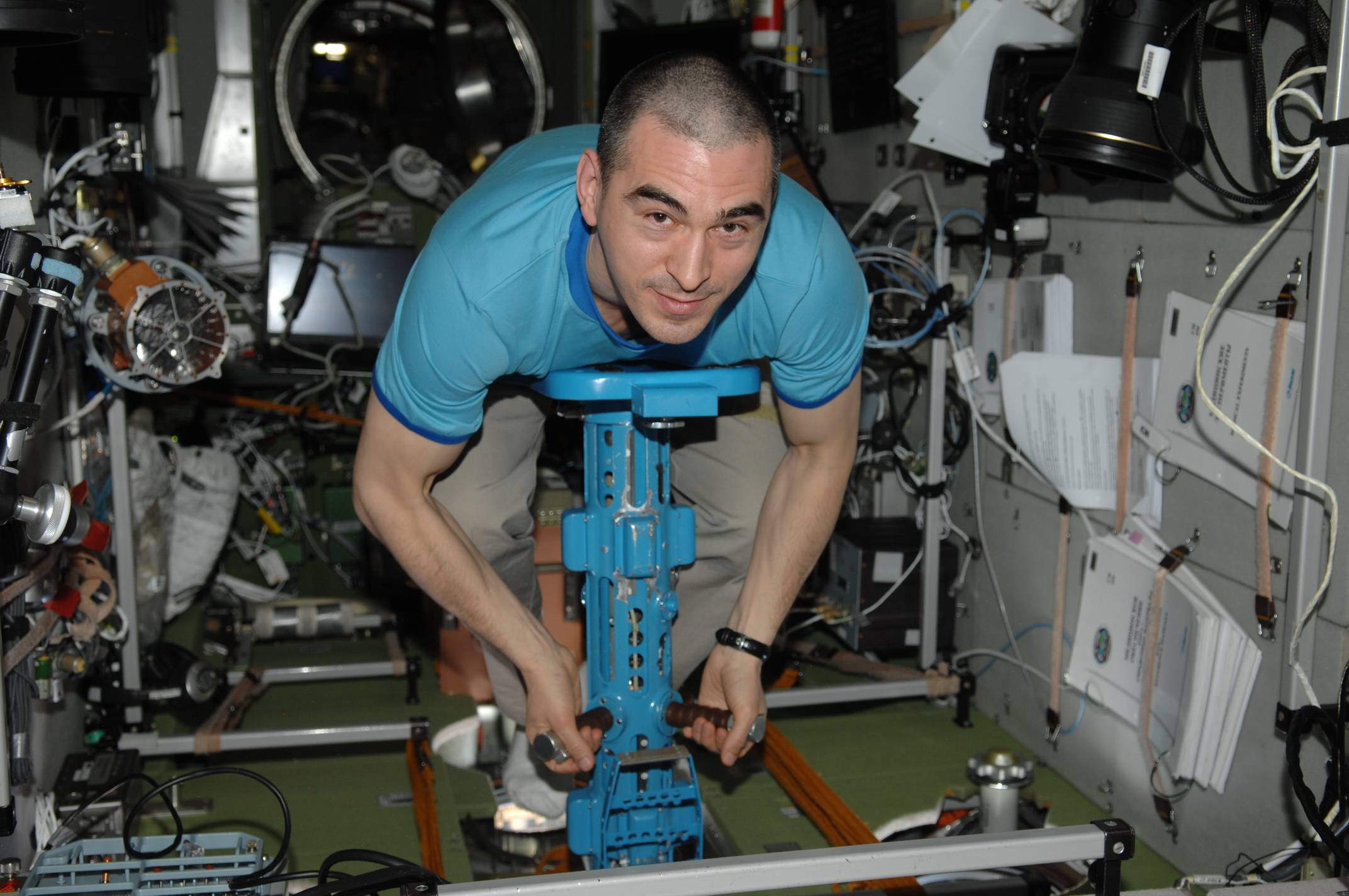 Peggy Whitson: We weigh ourselves with a Russian-built device called the body mass measuring system. It calculates inertia as it moves a mass back and forth on a calibrated spring. It's very simple system, but seems to work very well. After we calibrate the spring, we climb on the device and release the spring. Our mass is calculated from the inertial forces on the spring.

Following up on Deer Hunter's answer showing the Russian device, we can make a mass on a spring oscillate; this is the equation of motion:

This gives the frequency to be:

So, if we move the mass away from the rest position, we can measure the frequency of its oscillation over a period of time. If we have carefully calibrated the spring and know the spring constant $k$ to high precision, we can calculate the mass $m$.

The benefits of this over a linear acceleration device are its simplicity, robustness and that it is contained; the mass oscillates in place, rather than moving in space, and you need only measure the frequency which can be done over a number of oscillations. By comparison, a linear acceleration device requires knowledge of the force involved, careful measurement of velocity and is single-shot operation. There's not a lot of space in a space station!

You can use rotation to make a balance scale work. Attach the object being weighed on one end of a rod attached to a pivot and a moveable counterweight to the other. Only one position on the rod for the counterweight will allow the system to be balanced for any given test mass.

The following is only an example. As ernestopheles already said, one could use any effect that depends on mass.

To measure the mass of small solid objects, I'd put a small sliding carriage between 2 springs of known properties. Place the mass in the carriage, deflect the carriage a bit and let it go. Measure the frequency of oscillation.

M.E.L.M.E.L.
101
$\endgroup$
Add a comment  |
Highly active question. Earn 10 reputation (not counting the association bonus) in order to answer this question. The reputation requirement helps protect this question from spam and non-answer activity.

Not the answer you're looking for? Browse other questions tagged microgravity mass measurement or ask your own question.

6
How do we create a zero gravity environment on earth?
6
Could daily variations of weight on Earth really be 0.003%?
3
How do reduced gravity aircraft work?
6
How much will Europa Clipper weigh?
7
How will SpaceX's Starship accommodate its 100 passengers from the effects of micro-gravity?
5
Why can't a regular hammer be used in micro-gravity?