We've all seen many photos roughly like this... however this can be deceptive;

In short, at that height, what angle does the Earth fill horizon to horizon?

What angle, actually does the Earth take when you're at 400km?

Perhaps someone has an astronaut's comments on this or?

Again - Hollywood representations tend to fill our minds, but those could be basically quite wrong.

This would be very useful to know in making a VR where you are at that position. 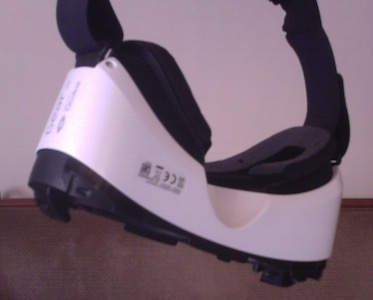 I've found it difficult to get any real info.

Horizon at ground level appears indeed as a plane taking up 180° of our field of view when looking at nadir. This geoidal horizon (tangential to the geoid) hides half of the sky. Astronomical or sensible horizon is nearly identical, this is the one from eyes level, and the reference to read the height of a body in the sky with a sextant.

But as soon as the observer gains altitude the separation between Earth and sky moves below geoidal horizon to form a circle, known as the limb, which determines the true, geometrical or geographic horizon. The angular size of the limb is indeed less than 180°, and smaller as altitude increases.


Angular size of Earth limb for an observer in altitude.

The problem can be represented like in the image below, with distance OP being the sum of Earth radius ($OA$) and altitude of the observer. 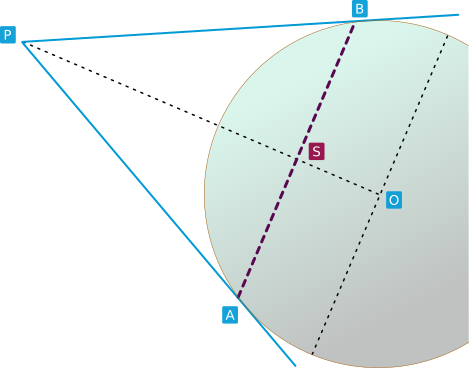 Let's assume the observer is at an altitude of 400 km:

It means for an observer aboard the ISS, Earth limb appears as a disk of apparent diameter of 140°. Of course, this apparent size will vary when ISS altitude varies. ISS orbit is not circular, Earth area swept by ISS is not a perfect sphere portion, and most significantly ISS is subject to orbital decay between reboosts.

At altitude 400 km the angular size of the hidden equator is only 86°, two thirds of the limb.

For comparison, The eyes binocular vision covers about 120° horizontally. While the horizontal field is much larger (more than 200/220° without moving the eyes) and very sensitive to movements, details and colors are only perceived within 60 to 120°. In a theater, the screen width is about 90° for audience at the center of the first row (recommended maximum angle) 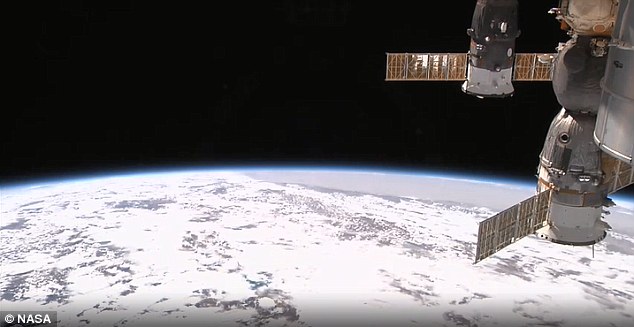 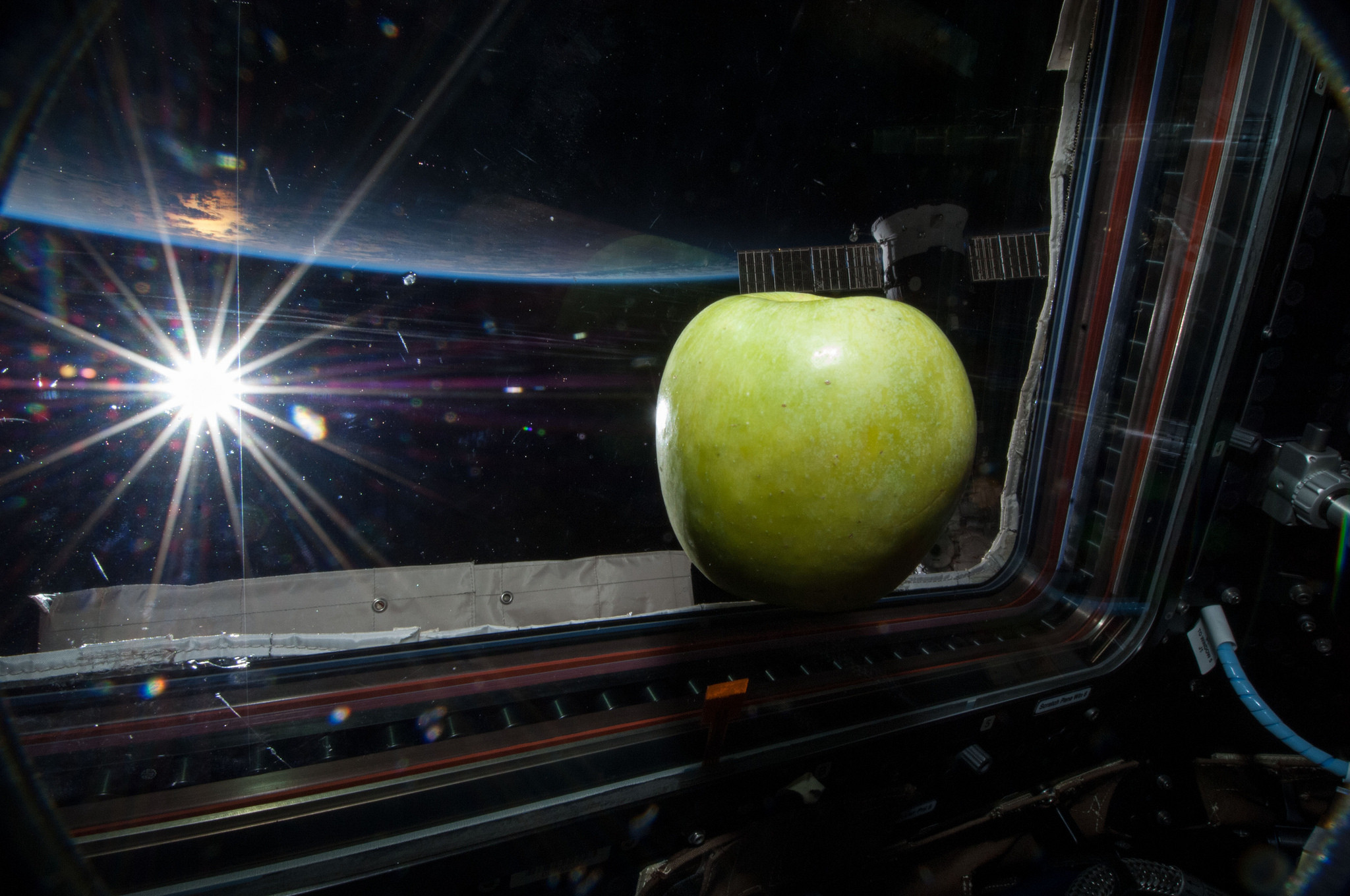 The lens required to get a full monolithic picture of the Earth must have a vertical angle of view of 140°. For a regular lens, angle of view, sensor size and focal length are linked by: $\widehat {AoV} = 2 \arctan \frac {size} {2 f}$

For a 35 mm sensor ("full frame") the focal length to take in 140° is 4.2 mm. For a smaller sensor, the actual focal length would be even shorter. These values are approximate as the lens creates a circular image while the recorded image is generally rectangular, so the usable field of view is smaller).

The fisheye lens has a longer focal for a given angle of view, and the latter can be very large (more than 180°, which is not possible for a linear lens). There are different types of fisheyes, but the most commercialized is one using an equisolid angle projection, where equal solid angles of the 3D space are projected as equal areas on the 2D sensor. This time the relation between AoV, size and focal length is: $\widehat {AoV} = 4 \arcsin \frac {size} {4 f}$. 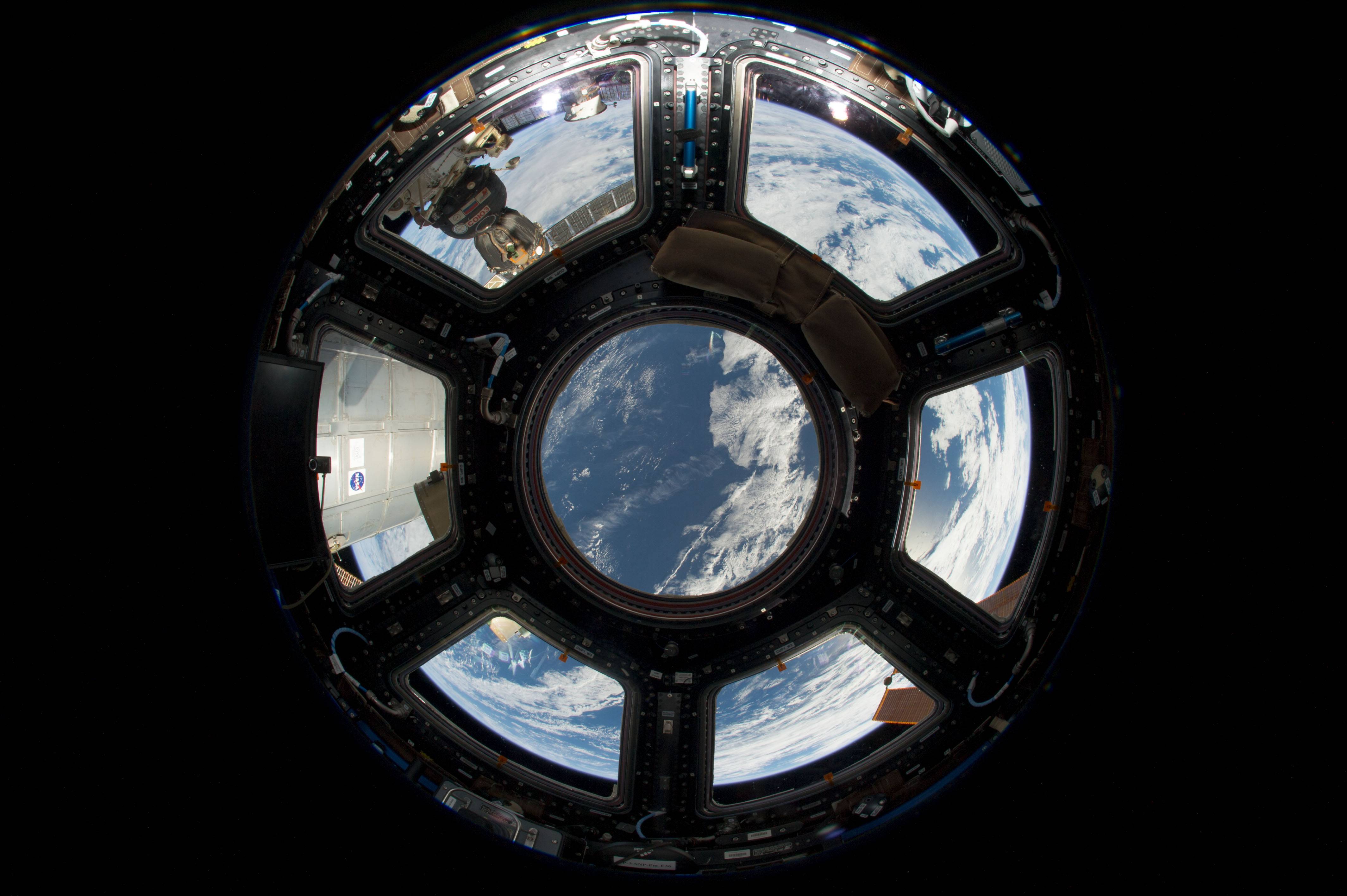 The appropriate lens is not the only condition required to see the whole Earth disk, we also need a window providing a good aperture...


Is it possible to see the entire Earth disk through an ISS window?

The largest window ever used in space is the nadir one of the ISS cupola module. it is a circular glass panel with a diameter of 80 cm.

It allows a panoramic view from the Earth-facing side (nadir) of the ISS. 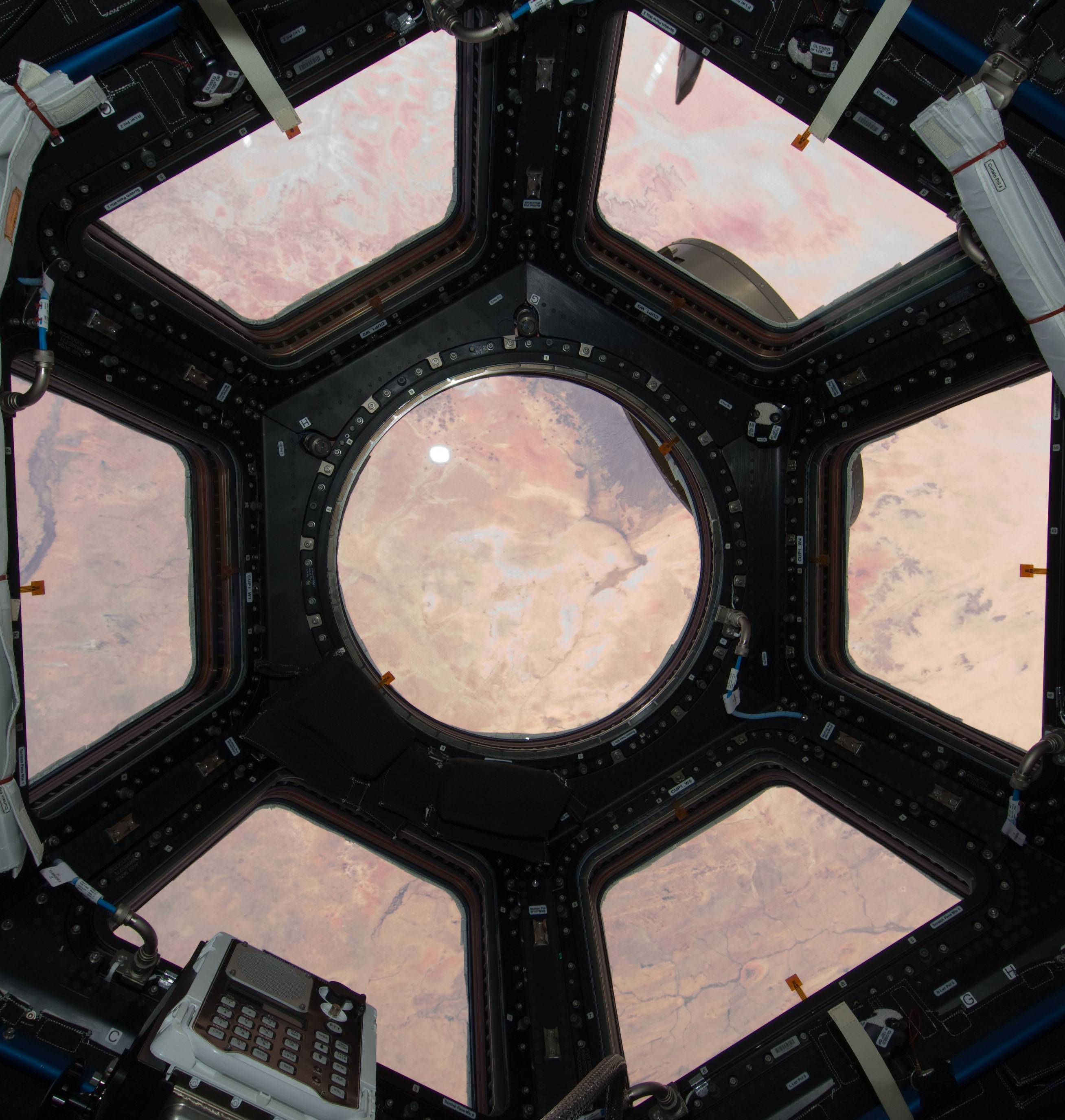 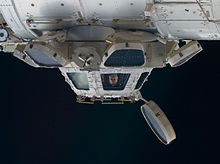 Note how different the visible Earth portion is between the two pictures taken from the cupola. It's because on the first one the camera was closer to the center window. Curiously on the second image, while the camera has moved back, the visible cupola portion is smaller. It's because the angle of view of the lens is smaller in the second image (rectilinear lens) than in the first one (fisheye).

The possibility to take in the full Earth limb is discussed here: How far into space does one have to travel to see the entire sphere of earth?.

The discussion is about another spacecraft, and another window size, it says that you need to be at about 525 km altitude to see the whole limb from a 70 cm window.

Let's look at the ISS case at 400 km, with a 80 cm window, and Earth apparent size of 140°. How close from the glass the eye must be placed, so that the whole limb can be seen through the window? 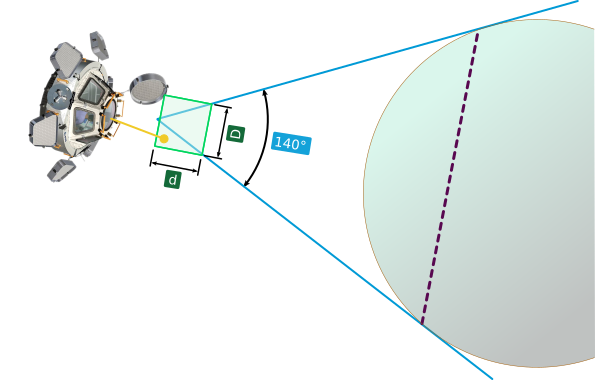 The eye must be at a maximum distance of 14.5 cm of the external panel.

It happens the window is a bit thinner than 14.5 cm, So taking a picture of the full limb is possible. The horizon is visible, though difficult to see, as confirmed by astronaut Ed Lu: "When I look out a window that faces straight down, it is actually pretty hard to see the horizon—you need to get your face very close to the window.".

It's about 140 degrees, varying a little as the ISS altitude varies.

To get an idea of what that 140 should look like, your fist held out at arms length occupies about 10 degrees. So, look to your left, and measure two fists in. And the same on the right.

Note that this exceeds the available FoV of all VR headsets at the time of writing, apart from the HTC Vive which does 145 on the widest setting, but the edges look blurry due to the fresnel lenses.

It also exceeds the eyes natural vertical FOV, of about 135 degrees (and 120 horizontal binocular vision).

So you won't see the full Earth disk in VR, and you likely won't see it if you were in space using your real eyes either, unlike what the above "answer" claims. You will have to move your head or eyes slightly from side to side and up and down to see the full disk. And that's if the spacesuit helmet didn't get in the way (a quick google didn't show any numbers, but just by looking at a few pictures it looks nearly 180)

I was a bit surprised when I calculated how it looks from geosynchronous orbit. The Earth only occupies about 20 degrees of the sky. That's pretty high altitude.

For VR rendering you will not need to render a curved planetary surface. Unreal Engine will by default switch from stereo to mono rendering for objects further than 750m (i think). The parallax visible at that range starts to be too small to bother about, so everything further than that is rendered in mono, and could just as easily be projected onto a flat skybox, or the inside surface of a giant sphere. Obviously lighting, texturing, atmospheric effects and so on contribute to a curved look, but the curved planetary surface itself doesn't need to be explicitly rendered as one in VR. Just as a full moon looks flat to us on Earth, the difference between the distance from the astronaut to the center of Earth and the distance from the astronaut to the edge is indistinguishable.

19
Does the orbit of the ISS decay?
13
What is the large circular device with a dozen concentric circles on Sentinel 3B?
1
Help computing solid angle subtended by the Earth as seen from LEO

45
Can I see the ISS from the surface with the naked eye?
21
Is there a realistic looking ISS scale model available somewhere?
5
How has the angular velocity of Earth changed over the past 100 years?
4
Observing ISS from the earth
4
What's this mini-cupola-looking object in this photo from the ISS?
31
How are astronauts in the ISS protected from electric shock?
3
What parts of the ISS would impact the Earth with a substantial amount of kinetic energy?
5
Any official size for the ISS pizza box?
1
How much of the total angular momentum of the Earth-Moon system is due to the Moon?