In Twitter the @NewHorizonsBot always announces whenever #NewHorizons releases a new image. 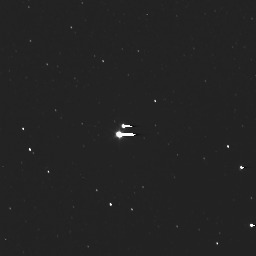 Is there an easy way to watch these LORRI images without those strong artifacts?

Is there a place where those new images are being processed so they look like the video at the bottom here at space.com?

For complete catalogs of validated and calibrated images, not yet. Eventually, they will find their way into the Planetary Data System (PDS) and you'll be able to browse and search for images, too. From LORRI Raw Image Browser:

Welcome to the New Horizons image site, where NASA and the New Horizons mission are happy to provide these JPEG images - displayed in raw form without special processing - for the public to use and enjoy. These JPEGs of images taken by the LOng Range Reconnaissance Imager (LORRI) are generally posted within 48 hours after receipt at the New Horizons Science Operations Center. The date/time listed in the image caption is when the picture was taken by the spacecraft, though receipt of the data on Earth could be many days later, depending on when the image is downloaded from New Horizons.

In addition, the fully validated and calibrated images will be made available at NASA's Planetary Data System within nine months to a year after receipt of all images on the ground. In all cases, the images will be available to the public, but please refer to the official New Horizons Image Use Policy for the proper use and referencing of these images.

So far though, no New Horizons data products appear in the list of PDS Imaging Node Data Holdings and we're left with what data is approved for early public release by New Horizons PI.

Some of those (see releases here) would come already calibrated and processed for easier public consumption, and some the New Horizons team would deem are relevant to whatever they are trying to present to us in raw, or partially processed form. Note that for scientific data, verification and calibration can take substantial load on the resources the team operates with, their time, and often takes multiple frames or whole sessions to calibrate individual frames.

If you're impatient though, you could try finding enthusiast individuals and groups that try to process these raw images on their own. Those wouldn't be verified, but it's often possible to get good results with readily available image processing tools, and if you don't mind a bit of image processing (granted, that's often tedious work), you can try to clean them up on your own too. For the specific image you attach to your question, artifacts affecting it are described in the subsequent one:

This image contains one or more objects whose brightness exceeds the detector's saturation level. This sometimes produces a "tail" of bright and/or dark pixels to the right of the object. You may also notice a faint vertical white stripe passing through the saturated object; this is an artifact called "frame transfer smear" and is associated with the incomplete removal of signal produced when the image is transferred from the optically active region of the detector to the storage region of the detector. If the target is badly saturated, you may also notice a faint, X-shaped feature nearly centered on the object; these are optical diffraction spikes.

This image contains one or more streaks associated with cosmic rays passing through the detector. Nearly every LORRI image has at least one cosmic ray strike, but most are "single pixel" events (i.e., they only appear to be in single pixel and can easily be mistaken for stars). But sometimes a cosmic ray is energetic enough that it leaves a "trail" as it passes through the LORRI detector.

Not the answer you're looking for? Browse other questions tagged new-horizons pluto imaging raw-data or ask your own question.

8
Is it possible to take images of extrasolar planets?
11
Why isn't Pluto a circle on LORRI images?
14
Why will there not be any images returned after July 20th until September?
12
How are New Horizons images sent back to Earth?
4
Why is part of this New Horizon's Charon high resolution image missing?
20
Why have there been no new New Horizons images in the last few weeks?
6
Timing shadows from the Kuiper belt! Any news? Did it work?
1
Where to find raw images of Ultima Thule?
9
Explanation of weird values in New Horizons data?
1
LORRI raw images in uncompressed format