A cloud-top colony on Venus, will it drift to the poles?

Suppose a cloud-top colony on Venus. Provided that it has no thrusting engines, where it will tend to go naturally with winds, to the equator, to the poles or elsewhere?

There's a lot to be said about circulation of Venusian troposphere first, but that's all nicely explained on Wikipedia. But please read it as background, if that's required; For easier reference though, and from that same Wikipedia page, here's a cross-section diagram of the atmospheric circulation in the atmosphere of Venus: 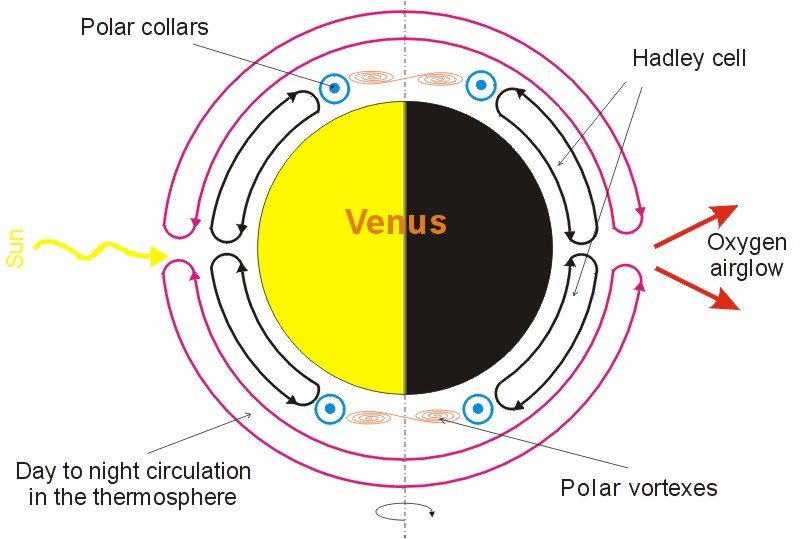 An aerostat colony in Venusian atmosphere doesn't really require thrusters to control its latitude. It could simply do it the same way that hot air balloons in Earth's atmosphere do it - by changing the temperature of the air that provides them with buoyancy to move to altitudes where wind direction is suitable. Yes, such aerostat colonies would have to be flexible structures, but then you could do this with active heating and cooling of the buoyant air (or part of it) and increase you colony's volume and with it the mass of the displaced air, or more simply by passive means, such as increasing or reducing exposure to environmental heating of the buoyant mass. Perhaps as simply as synchronizing meridional drift with your synodic period.

In simpler terms, if you would on average keep your aerostat colony at 50 km above ground and roughly over equator, in about 4 days that it would take it to circumnavigate Venus, you could spend 2* days at altitude of 55 km and let meridional flow drift you slowly towards higher latitudes, and the remaining two days when you're on the night side, lower air temperature within it, with it lower your altitude (to 45 km if I strictly follow my example), and let the return flow of Hadley cell slowly drift you back towards the equator. Your colony's inhabitants might prefer a bit colder air during night than during day anyway.

This diagram from Wikipedia on Hadley cell is for Earth, so the numbers and types of clouds depicted are off, but it should still help visualize how meridional drift could be controlled by lowering or raising aerostat's altitude: 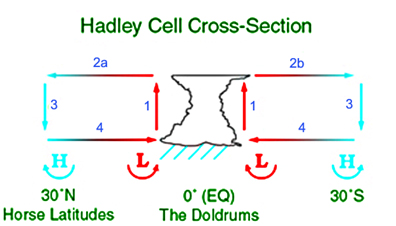 Otherwise, without any maneuvering whatsoever, while the chance of being pulled through polar collars and into polar regions is rather small, it is not really excluded. Your colony's altitude would more likely naturally decay into lower altitude one by entering night side and cooling down faster than getting close to ±60° latitude (zonal flow is faster than meridional), but you might get unlucky and catch a strong jet to carry you over on inertia of a large mass colony.

During the Vega program, while there was a great deal of problems establishing exact position of the two balloons released on June 11 and 15, 1985 into the Venusian atmosphere from Soviet VEGA 1 and VEGA 2 spacecraft, meridional drift doesn't seem to have been a problem at all while balloons lasted in the hostile environment (~ 46 hours, making about one-third of the way around Venus at 54 km altitude but with substantial vertical motion as they were deployed close to equator).

Sadly, most of good references are paywalled, but here's a free access report on The Venus Balloon Project (PDF) that includes this diagram of the paths of the two balloons: 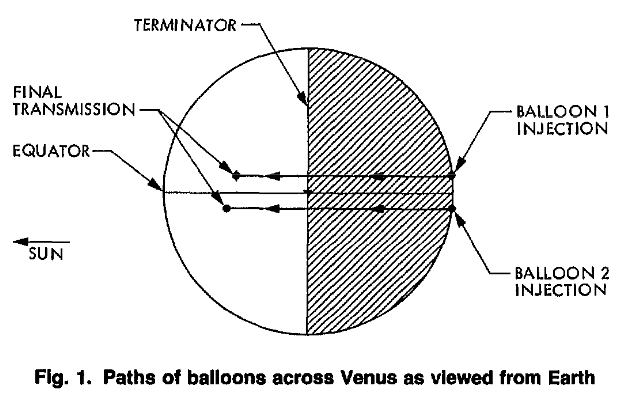 *Day and night time wouldn't be exactly half-half because of critical refractive angle of Venusian atmosphere, but faster winds at higher altitudes (3 m/s per km) would offset this, so for our example where we navigate at higher altitude during day than during night, it should be close enough.

Not the answer you're looking for? Browse other questions tagged colonization planetary-science atmosphere venus or ask your own question.

12
Does Venus have doldrums or horse latitudes (latitudes with lower winds)?
4
How long would a blimp last in Venusian atmosphere at an altitude of 65 km?

15
How long could Solar Impulse fly in the Venerean atmosphere?
2
What is the best (NASA preferred) location for a lunar colony?
10
Would it be feasible to use wind turbines on Venus?
13
Why not bring life to Venus along with the next exploring mission?
5
Is really almost all the water in the atmosphere of Venus above the clouds?
14
What is the surface temperature distribution of Venus?
8
How to come back from a Venus cloud station?
12
Phosphine, yes — but where are the organic compounds on Venus?