What is the object protruding from the left side of the payload fairing during ULA Atlas V 501 AFSPC-5 launch?

I have not noticed it on previous launches. It's also visible in AFSPC-5 launch videos, for example in this one:

And it also comes into view of the camera immediately following the vehicle's pitch, yaw & roll maneuver in this mission profile video:

That's a hydrogen vent fin disposing of GH2 (gaseous hydrogen) that can outgas into the payload fairing from the Centaur upper stage's LH2 (liquid hydrogen) tank that is stored in a balloon tank at the top of the upper stage. From History of the Titan Centaur Launch Vehicle (PDF):

This liquid hydrogen leakage caused explosion of the launch vehicle during the first Atlas-Centaur launch in May 8, 1962. According to Taming Liquid Hydrogen: The Centaur Upper Stage Rocket 1958-2002 (PDF), The Failure of F-1, the First Atlas-Centaur Launch (starting on page 63):

Testing at Lewis not only provided independent verification of contractor performance, but also contributed new solutions to problems. The loss of F-1 had occurred within a tenth of a second after hydrogen gas had been vented from an opening at the top of the vehicle. A test program in the 8-by-6-foot supersonic wind tunnel at Lewis revealed that the hydrogen-venting system posed a fire hazard during flight. The solution was to design a vent fin or snout on the nose fairing that extended about 50 inches from the tank, just far enough away to keep the hydrogen gas from igniting along the hot surface of the vehicle.

This GH2 vent fin is not unique to the 5 meter diameter payload fairing used during AFSPC-5 launch, for example, here's a video of SBIRS GEO-2 launch on Atlas V 401 with a 4.2 m Ø fairing:

It is shown in Atlas V Launch Services User's Guide (PDF) in the schematic for the 4.2 m Ø fairing (page 267): 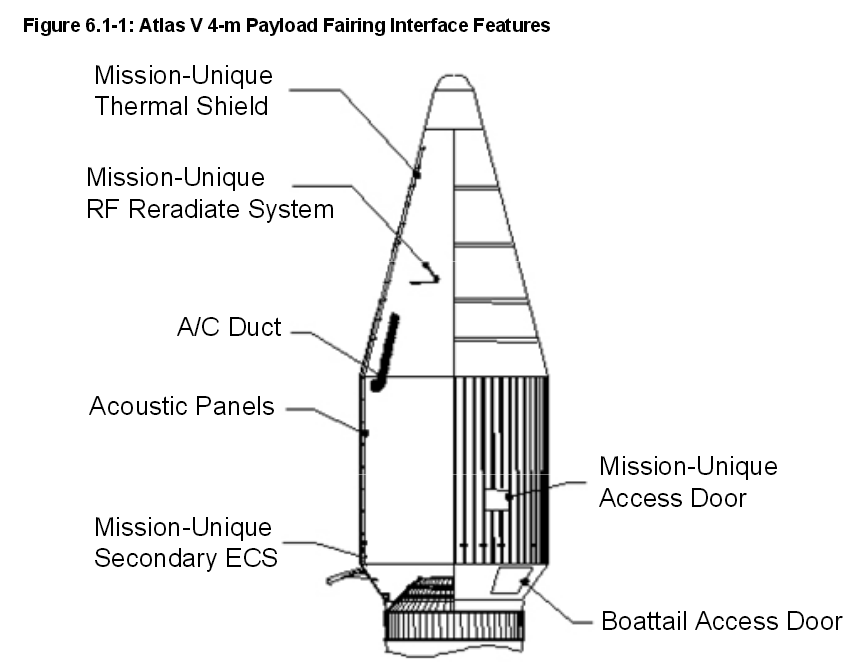 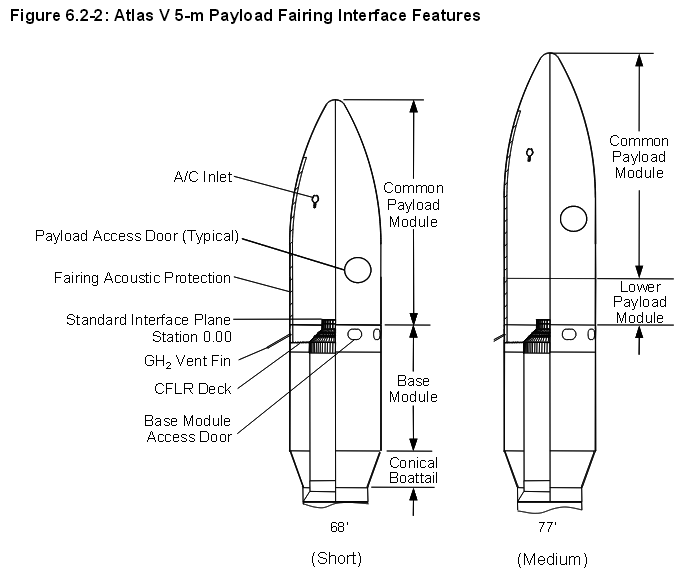 In this Universe Today article, on the first photograph (I can't reproduce it here because it's copyrighted), you can see that vent fin connected with umbilical to the launch tower, where it would be purged with nitrogen provided through the air conditioning (A/C) inlet (seen on photograph as the topmost duct) and vented out the vent fin at the bottom of the Centaur upper stage's forward adapter, just above the CFLR (Centaur Forward Load Reactor) deck.

Not the answer you're looking for? Browse other questions tagged identify-this-object launch-vehicle ula atlas-v x-37 or ask your own question.

9
Do the propellant tanks of actual (not planned) expendable vehicles' upper stages have relief valves?
4
Was New Horizons launched on a copper rocket?

9
What are the features on X-37 fairing/transport jig
2
What was the thrust-to-weight ratio during liftoff of the Atlas V OA-4 launch?
5
What does the US Govt get out of its Assured Access funding of ULA?
12
Why do the shapes of these two exhaust plumes from an Atlas V 411 look different?
8
What is the source of the 'whoop' sound made before the liftoff (T-3s) of Atlas-V rocket?
11
What happened to the Atlas IV?
1
What is the Oxidiser/Fuel Ratio of the Atlas V Centaur Upper Stage?
12
On large diameter Atlas V fairings, why is the Centaur inside the fairing?