Why can't we launch from space?

So this may be a stupid question but I was wondering why we couldn't launch from space. I know that most of the fuel that we spend is for escaping Earth gravity. Yet, if we have already done this with the International Space Station, couldn't we bring parts up there. Then we could assemble a low power rocket there. Then we would only need a small unbalanced force to change the object's inertia. There would be no force that the rocket would have to overcome in space. This means that the object will continue in that direction, which means it would be so much easier to just get farther into space with less fuel. To bring the parts up there in the first place, they can be slowly brought up there overtime, just like they did when they first made the space station. It seems like we could save so much fuel if we do this. Yet, I might be completely wrong. Please correct me if I am, since I'm only in the 7th grade, so I haven't taken any heavy physics or astronomy. Thanks!

We can launch from space and in a sense, we already are. If you consider upper stages of orbital launch vehicles that might send spacecraft into higher Earth orbit or even escape Earth's gravity well altogether, we really ignite those when they're already in the vacuum of space. And depending on the launch vehicle's capability and intended trajectory, they might, or might not have already achieved orbital velocity. But your question, I guess, boils down to what we're usually referring to as mass economy;

You see, gravitational acceleration at the orbital altitude that the International Space Station orbits the Earth (what we call Low Earth Orbit, or LEO for short) is still roughly 8.64 m/s² (or ~ 88% of gravitational pull that keeps us on the ground at the surface), and for orbiting bodies of negligible mass compared to the parent body they orbit given by $\mu/r^2$ where standard gravitational parameter $\mu$ is $G\cdot M$, or the product of gravitational constant $G$ and mass $M$ of the central body. To keep something from falling back down to Earth once we launch it, we really have just two options:

To reach these immense speeds needed to orbit or escape any payload mass, we need to either gradually spend what we call reaction mass (for chemical rockets that would be their propellants) to push the vehicle forward by accelerating its reaction mass backwards by the principle of equal and opposite reaction of Newton's third law of motion, and/or accelerate the payload to sufficient speed already on the Earth's surface before it's released to space. But, the latter - i.e. mass drivers or space guns - come with a huge problem that initially, they still need to move through dense Earth's atmosphere, which will introduce tremendous air resistance, friction heating, and form strong shock waves and eddies that could destabilize them and cause them to disintegrate. So you can see that the latter option, in atmospheres, is really difficult to achieve without having to spend most of the mass on the vehicle's or payload's shielding, and that there would be a point in trying to minimize that and maximizing payload mass fraction.

But, we can't really launch from space without first having something to launch, and something to launch it with already there. And that's where that mass economy term kicks in. To move mass from Earth to Earth's orbit, we have to spend mass to get there. A lot of it, and it's so frustrating that it's often referred to as the tyranny of the rocket equation, which refers to the Tsiolkovsky rocket equation, performance of high thrust capable propellants, and difficulties of lofting something towards space even with rocket staging, where rockets would in stages shed dead weight of stages that are already exhausted of propellants as the rocket ascends.

So, if we had both something to launch and something to launch it with already in Earth's orbit, then yes, it would be tremendously easier. ISS actually does have two relatively simple launch catapults, one installed on the Japanese Kibo module and called Small Satellite Orbital Deployer (SSOD), and another NanoRacks built CubeSat Deployer, that both can launch small and light CubeSat satellites into similar to ISS's orbits: 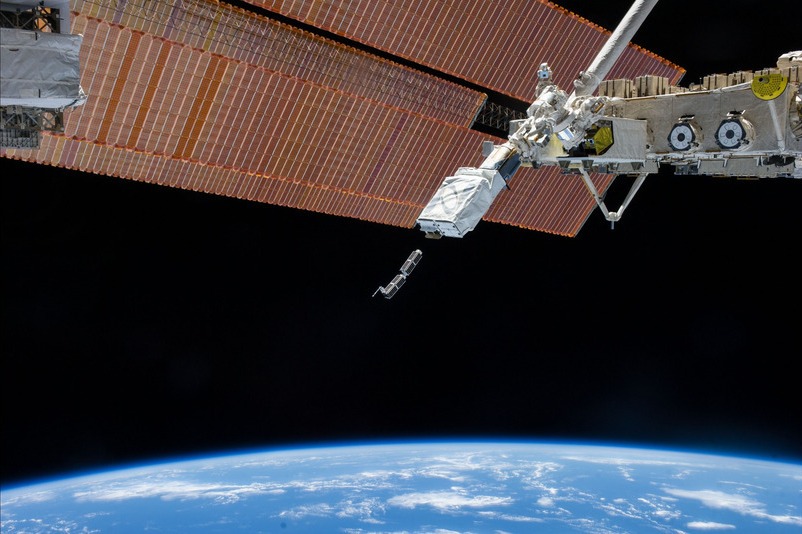 A set of NanoRacks CubeSats deployed by the CubeSat Deployer at the end of the Japanese robotic arm. Image: NASA

But these CubeSats already have to be delivered to the station, and they come on conventional chemical rockets. And the acceleration these satellites get relative to the station from SSDO is tiny, so they can only be deployed to similar orbital altitude to station's own. For anything more, energy needed is simply too high, and payloads would still have to have their own means of propulsion, and with it increase in mass, to later circularize their orbital trajectory.

And Space Shuttle Orbiters also deployed and launched satellites, some with their own upper stages and would depart LEO and head in an interplanetary trajectory towards other planets, like for example the Galileo spacecraft that was carried into LEO and launched from Space Shuttle Atlantis STS-34 flight in October 18, 1989: 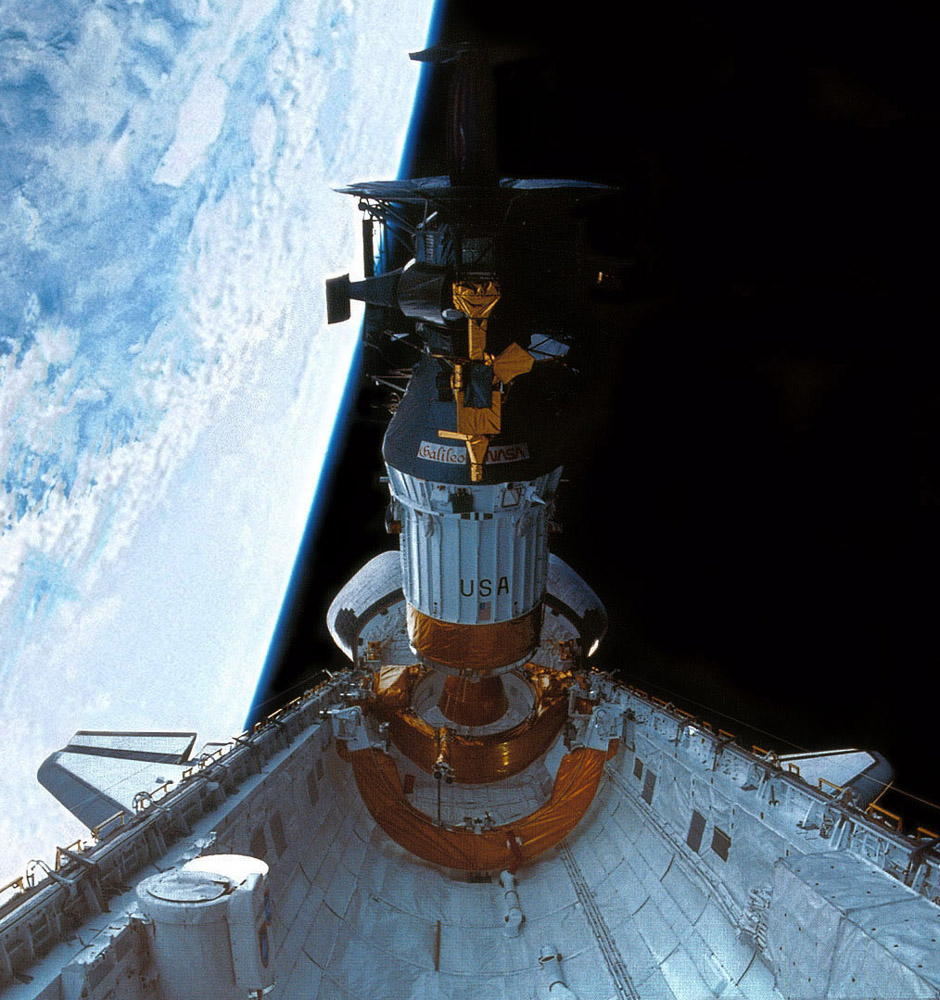 The Galileo spacecraft and its Inertial Upper Stage (IUS) being deployed from the Space Shuttle Atlantis. Image: NASA

And there's a lot more to be said about this, so I'll slowly try to wrap it up;

There have been many proposals to establish orbital propellant depots and perhaps even deliver reaction mass to them from gravitationally less harsh mistresses like the Moon. Required change in velocity (delta-v) to launch from the Moon to LEO is only about 1.87 km/s (without orbital circularization), and if we compare that with about 9.3 - 10 km/s needed to launch to LEO from Earth's surface, there really could be huge mass savings in it. But that comes with its own problems, and, perhaps more importantly, we currently don't have any infrastructure there to support this and it will take many conventional launches to get to that point and we'll likely still build our satellites on Earth in the foreseeable future.

So, as a conclusion, it really boils down to where resources are and how much effort is needed to place them where we want them to be. Sadly, from the delta-v budget's perspective, strategically good staging areas in open space that would enable easy (or easier) reach of various destinations we'd want to go to, are in the big void that's devoid of resources (there's roughly only 5 proton particles per cubic centimeter in the cislunar space) unless we place them there, so they need to be delivered there by some means. Or, can somehow do without additional resources needed and use what's already there (i.e. solar power and use that either directly with solar sails, or convert it to electricity and use for already mentioned but this time orbital mass drivers and launch rings, beam-powered propulsion, or all kinds of fantastic hypothetical propulsion methods that we've envisioned but are simply not there yet). So, for the time being, this means that resources needed to complete a launch in space, or also parts to assemble launch systems, are initially launched from the Earth.

But orbital rendezvous, docking and even assembly itself are certainly feasible and the ISS is one good example of that, though there were earlier space stations, some of which were also assembled in orbit out of multiple prefabricated modules. As for actually going anywhere else than Earth's orbit by assembly in space, well, Apollo missions to the Moon used the transposition, docking and extraction maneuvers and Lunar orbit rendezvous. And in the not too distant future, we expect the SLS (Space launch System) missions to do similar things, to launch crew and service modules on one launch vehicle, and additional advanced propulsion, habitat and landing modules on additional cargo block launch vehicles and later dock in Earth's orbit and, hopefully, one day, also around Mars.

For further reference, since you mention you're still in your early studying years, I can't recommend warmly enough NASA's Basics of Space Flight:

Basics of Space Flight is a tutorial designed primarily to help operations people identify the range of concepts associated with deep space missions, and grasp the relationships among them. It also enjoys popularity with college and high-school students and faculty, and people everywhere who are interested in interplanetary space flight.

I know that most of the fuel that we spend is for escaping Earth gravity.

That is not entirely true. Worse, it places undue emphasis on a side issue. A better way to understand it is that most of the fuel is expended to get the vehicle going fast enough to not hit the Earth. To simply send a rocket straight up 62 miles (100 km) doesn't take all that much fuel. Keeping it up there is the tricky part.

The hard part is that near-Earth orbital speed is 8,000 m/s (8 km/s) which, as Randal Munroe points out in his What-If for Orbital Speed is ten times faster than a rifle bullet. See that link for a well presented perspective.

We do 'launch from space'. Indeed that's exactly what Apollo did, for instance. They got themselves into low Earth orbit, and then from that orbit went to the Moon.

And the numbers behind this tell you why this is not some magic bullet:

The Saturn V stack had a wet (fueled) mass of about 3,000 tonnes. It could put about 140 tonnes into LEO. Getting to LEO is the hard part.

An early concept for the Apollo mission relied on launch from space. Several Nova rockets with 8 F-1 engines for the first stage would have been used to lift the parts into a low Earth orbit. After assembling all parts the whole stack would launch from orbit to the Moon. The return capsule to Earth would land on the Moon and return to Earth from the surface.

But using the excellent concept of John Houbolt a single smaller Saturn 5 was enough. So the Nova was never build. Using the Lunar Module and leaving the Command Module in a Moon orbit saved so much weight that several Novas were not needed.

After the end of the Apollo program no other mission needed so much weight that the launch from space was neccessary. A single smaller rocket than the Saturn V could be used for all deep space unmanned missions during the five decades following Apollo. A future manned Mars landing mission may need a launch from space. Or a soft landing of a Pluto rover.

Not the answer you're looking for? Browse other questions tagged launch orbit physics mass or ask your own question.

26
Could a Human reach escape velocity by jumping from the surface of Ceres (a dwarf planet)?
31
Why not travel to Mars in 2 months?
10
If Space Adventures actually does a Soyuz around the Moon, will this be the first real Earth Orbit Rendezvous launch?
37
Why don't we use catapults to get to space?
11
What would make a rocket sled launch feasible?
6
Splitting water quickly to turn a water rocket into a H/O rocket at launch: could it work?
1
Could a space winch work?
1
Possibility of moving Earth's orbit from continual rocket ejections
1
Is centre of mass a factor in space without gravity?