Could antimatter be used for spacecraft propulsion?

I have heard that antimatter has been produced and collected in the Large Hadron Collider and that it reacts violently with matter. Could this be used as a method of propulsion and if so what would be the theoretical thrust and impulse generated?

Yes, antimatter can be used to propel a spacecraft. The concept of an antimatter rocket is what we're after. 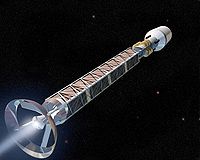 Just a concept drawing, but it gives us an idea of what we're talking about.

Another article discusses such a rocket (highlights here):

Smash a lump of matter into antimatter and it will release a thousand times more energy than the same mass of fuel in a nuclear fission reactor and some 2 billion times more than burning the equivalent in hydrocarbons.

First, some basic rocket science. The maximum speed of a rocket depends on its exhaust velocity, the fraction of mass devoted to fuel and the configuration of the rocket stages.

So these guys focus on the exhaust velocity–the speed of the particles produced in matter-antimatter annihilations as they leave the rocket engine.

In the past, various physicists have calculated that the pions should travel at over 90 per cent the speed of light but that the nozzle would be only 36 per cent efficient. That translates into an average exhaust velocity of only a third of light-speed, barely relativistic and somewhat of a disappointment for antimatter propulsion fans.

All that is set to change now, however. Keane and Zhang have come up with a different set of figures with the help of software developed by CERN that simulates the interaction between particles, matter and fields of various kinds.

CERN uses this software, called GEANT4 (short for Geometry and Tracking 4), to better understand how particles behave at the Large Hadron Collider, which itself collides beams of protons and anti-protons. So it’s ideally suited to Keane and Zhang’s task.

... To continue reading, click here. I'm not going to copy the whole thing.

It's a decent report on the subject, and one that doesn't read like dry sandpaper.

All in all, it's certainly possible - if you can get your hands on the antimatter.

Not the answer you're looking for? Browse other questions tagged propulsion antimatter or ask your own question.

4
What would be the dangers of matter/antimatter annihilation propulsion, and what can be done about them?

3
Modifications to impulse burn trajectory for low thrust propulsion
1
Could friction heat from aerobraking be used to power propulsion?
7
Recent advances in anti-matter generation
6
What is our ability to capture or reflect photons with a wavelength of $2.5×10^{-12}$ meters?
2
Antimatter fuel compartment
4
What would be the dangers of matter/antimatter annihilation propulsion, and what can be done about them?
28
Would a grinding machine be a simple and workable propulsion system for an interplanetary spacecraft?
5
What is the difference between “Air-augmented rocket propulsion” and “integral rocket-ramjet propulsion”?