Why does the Soyuz spacecraft's parachute have so many lines? 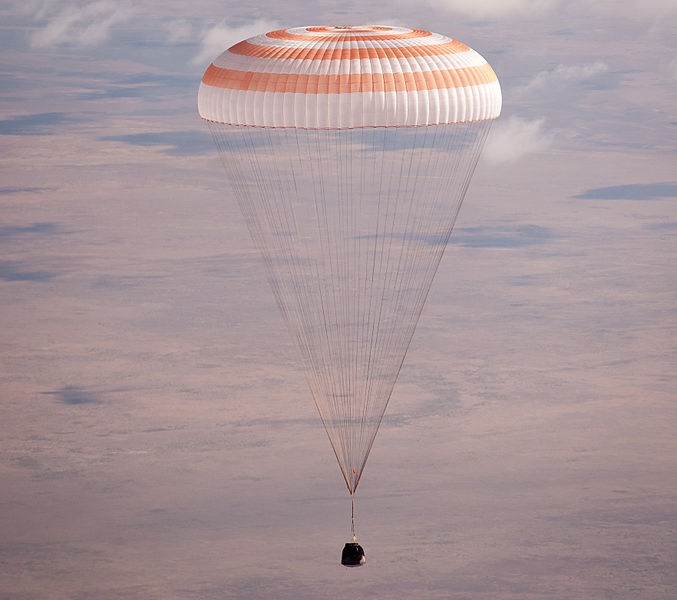 Image shows a myriad of lines holding down the parachute. I can't even count them all. Is this really necessary?

All those strings must surely add a lot of weight to the Soyuz TMA. I would think that only 12, 6, or maybe even just 3 lines are all that's necessary. Surely we have strong enough strings whose tensile strength is enough to hold the weight of the capsule?

Also, don't all those lines pose a greater risk of tangling up the chute? The fewer lines, the more safety. Or is this incorrect somehow?

All round parachutes have many suspension lines, and they're needed to distribute the load on the canopy, keep its shape, and their hooking (or even re-hooking) geometry during deployment can help with reefing and keeping its shape. It's not because we can't make suspension lines strong enough. Fewer suspension lines would require stronger canopy that would then likely result in even heavier parachute, and fewer sections would result in less controlled reefing and it would be more prone to collapsing and canopy tearing.

Soyuz TMA main parachute is a rather large annular pull down apex type that deploys after the spacecraft has already decelerated to subsonic speed with the help of two pilot and four drogue parachutes 15 minutes before landing[1] that reduce the rate of descent to ~ 80 m/s (288 km/h)[2] before the main parachute deploys, and it has a small apex hole to increase stability and reduce oscillation. From that linked Wikipedia page:

A variation on the round parachute is the pull down apex parachute. Invented by a Frenchman named Pierre-Marcel Lemoigne it is called a Para-Commander canopy in some circles, after the first model of the type. It is a round parachute, but with suspension lines to the canopy apex that apply load there and pull the apex closer to the load, distorting the round shape into a somewhat flattened or lenticular shape.

Some designs have the fabric removed from the apex to open a hole through which air can exit, giving the canopy an annular geometry. They also have decreased horizontal drag due to their flatter shape and, when combined with rear-facing vents, can have considerable forward speed.

So, while all those suspension lines do add to parachute's weight, and there's another point you missed in your question that a large parachute is even more difficult to fold properly (terribly important with parachutes!), if it used fewer suspension lines, it would have fewer sections that would somehow have to be even stronger then. And it would have problems keeping its shape once deployed because of larger sections, and due to this more prone to instabilities or tearing of the canopy.

So even if we could construct a chute with stronger suspension lines and canopy fabric, we likely wouldn't use any fewer suspension lines. As for entanglement of suspension lines, well there's always a chance you'll be having a really bad day, but that risk is reduced by using a single main parachute and pilot chutes that pull it out and help it reef. If lines entangle, there's still a good chance that the canopy will be able to keep its shape, lines will only stretch out (hook) from a bit higher up. Compare that with usually three main parachutes that most other spacecraft use, and you start appreciating that it's a tradeoff, and no solution is bulletproof.

Using many main parachutes means they can get entangled, canopies can bump with each other and partially or fully collapse, and there's even more suspension lines, but you can still get home for dinner if only one of them fails. With a single one, if that one fails, you have to deploy the spare one[3] and there might not be any time for that. It's a calculated risk and a design choice. But there isn't much point in reducing the number of suspension lines and parachute sections.

The number of ropes (suspension lines) is not arbitrary. Between every two gores (sectors) there is a load tape which transfers load from fabric canopy to lines. The width of lobed sectors (gores) is limited by strength of the fabric. Typically, the fabric is at least two times weaker than the fiber it is made of. The rope (unidirectional fiber structure) is the optimal way to transfer loads. Multiple ropes with small diameter ropes are stronger than an equivalent-section (and -weight) cable.

The parachute of Soyuz has a single canopy with larger diameter than the three parachutes of Dragon for example. Dragon parachutes also have 'myriad' ropes.

The spacecraft parachutes are optimized by trade-off between number of gores, thickness of fabric etc. 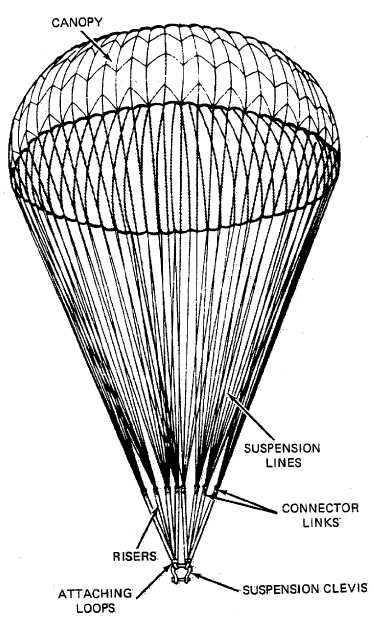 Not the answer you're looking for? Browse other questions tagged landing soyuz-spacecraft design crewed-spaceflight parachute or ask your own question.

20
Why does the Soyuz cover its main engine?
10
Why does Soyuz use a single large parachute vs 3 on most American capsules?
19
Why do Soyuz landings seem to be overshot?
19
Why does the Soyuz parachute pulsate?
17
How does a landing spacecraft control main parachute inflation?
5
Does deploying the parachute dehermetize Soyuz?
22
Why can't you just parachute down right from orbit?
5
How exactly were solid-fuel rockets added to the parachute lines of the Voskhod capsule?
6
What is the heaviest object to have been returned to Earth with a parachute?