I have a numerical interplanetary trajectory model and am trying to find a way to accurately insert a spacecraft into a rendezvous orbit with its target planet having a particular periapse radius (for example, I'd like to have a spacecraft travel from Earth to Mars, and when it reaches Mars its periapse radius must be 200km above Mars' surface). Currently I can simulate a spacecraft trajectory from Earth to Mars, but have to get my required periapse radius by trial and error which is very time consuming. I've looked at Fundamentals of Astrodynamics (Bate et al.) which gives a way of doing this using a fully patched-conic approach using phase angles (pages 372 to 377). However I require a mid-course correction using a Lambert solver in my simulation and was wondering how I could calculate the required delta-V so that I will get the required periapse radius upon target arrival from this mid-course correction point. Any help would be greatly appreciated.

EDIT: Having read some more articles it seems that a term called the impact parameter is used a lot in literature when calculating planetary rendezvous and is given by,

Now, if I know what I want my spacecraft's periapse radius, $r_{p}$, to be when it reaches Mars, I know Mars' gravitation parameter, $\mu = GM$, and I know the spacecraft's hyperbolic excess velocity relative to Mars, $v_{\infty}$, when it enters Mars' sphere of influence, then would the value of $b$ given to me from the above equation be a radial "offset value" that I can put into a Lambert solver to get into the required orbit upon Mars rendezvous? That is, would the rendezvous aiming point that I give to the Lambert solver (in Cartesian coordinates) now be $ (x_{mars}, y_{mars}) + (b_{x}, b_{y})$, where $x_{mars}$ and $y_{mars}$ are the original heliocentric x and y coordinates of Mars upon intercept and $b_{x}$ and $b_{y}$ are the offset values that I'll add to the original Mars intercept point that will give me the required periapse radius upon Mars' rendezvous? 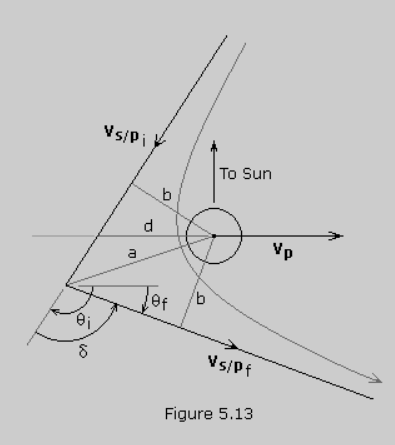 You pretty much answered your own question. You target a point on what is called the B-plane. Imagine for a moment that the planet is just a point in space (where the center of the planet is) with no mass. The B-plane goes through that point and is perpendicular to your trajectory through that point. To target particular flyby conditions, you target a point on that B-plane. The distance from the center of the B-plane determines your closest approach radius, per the formula in your question ($b$). That gives you a circle of targets to pick from that determines either your flyby $\Delta V$ direction or your orbit insertion plane and retrograde or prograde.

Not the answer you're looking for? Browse other questions tagged trajectory interplanetary rendezvous or ask your own question.

11
Ephemeris data usage in interplanetary trajectory application
11
3-Body Simulation and Accuracy of Lambert Interplanetary Solver
11
Mars Orbit Upon Intercept
15
Do we sufficiently understand mechanics of Lagrange point stationkeeping for EML2 rendezvous and assembly?
8
Clohessy-Wiltshire equations vs. Lambert solver for low-Earth Orbital Rendezvous
5
Low Time-of-Flight Lambert Solver Trajectory Errors
6
Pork chop plot generator and Lambert solver test cases
1
Deep space marksmanship; will DART's intercept and impact trajectory represent the best ever if successful? If so, by how much?
26
How will DART be able to hit a 170 meter rock dead-center at over 6000 m/s? What technologies will be use and how will they work together?