How do the effects of different cosmic rays compare?

All of the particles come in a range of energies that start at about 100 MeV, and most are less than 10 GeV. Their energy can on rare occasion be much higher, with particles having over 1 TeV of energy on record. 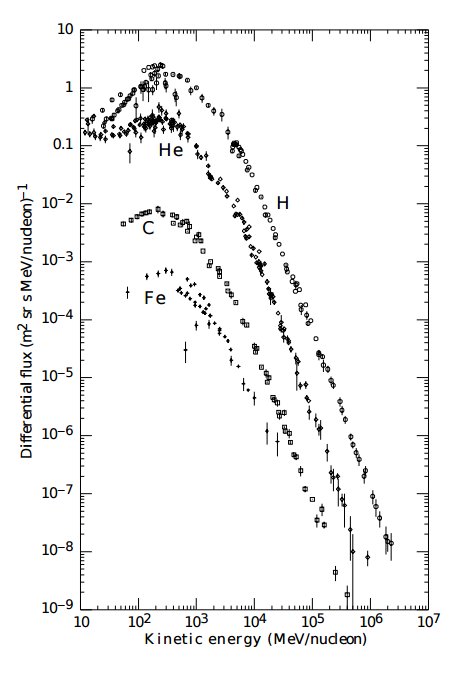 The graph above is titled "Major components of the primary cosmic rays (from Simpson)" and can be found in this online textbook made available by Washington University.

When these particles hit the nucleus of an atom in their path, they have enough energy to shatter it. The new particles thus created also have enough energy to shatter the nuclei of other atoms, and this process continues until the energy is dissipated. So what happens when a cosmic ray hits a spaceship is pretty complicated. Also it is quite possible, because of the amount of empty space between atoms, for a cosmic ray to pass through a whole spaceship without hitting anything at all.

I have run across information here and there that it is the HZE particles that are the main concern. I don't understand this when they are such a small proportion of all cosmic rays. Sometimes it also seems like an article is saying that only particles below a certain energy are relevant. I've read (or at least skimmed) a bunch of articles and it is getting muddled for me.

How does the damage done by cosmic rays of different energies and compositions compare? I think I need a way to picture this that I can't get from the graphs and charts in the papers I have found, which are pretty technical and dense.

To start with, radiation effects materials and tissue in two primary ways. First of all a particle can collide with a nucleus and eject it from its lattice position which leads to material defects that make materials more brittle and changes the mechanical and physical properties. Secondly, and more important to electronics and people, radiation can knock electrons out of atomic shells, which prevents materials from chemically bonding. When this happens to DNA and the proteins are not properly bonded, they will not reproduce (mitosis) correctly and when this happens, it can lead to cancer.

Directly ionizing radiation, typically refers to charged particles. As a charged ion streams through space, the electric field caused by its charge can interact with electrons in an atoms electric shell and rip them from the shell. It can do all of this without ever actually touching the atom that it is ionizing. Indirectly ionizing radiation, typically refers to neutral particles like photons and neutrons that must collide with electrons to remove them from a shell, which is statistically less likely.

First of all think about throwing a ping pong ball at a bowling ball. If you did this, the ping pong ball would bounce off the bowling ball at essentially the same speed/energy it impacted with because there is a large mass difference between the particle and the collision medium. It would not transfer much energy in the collision process. However, if you throw a ping-pong ball at another ping-pong ball, the one you threw might transfer all of its energy to the impacted ball and come to rest, causing the other pin-pong ball to go flying in some direction, this is similar to radiation interactions. If a neutron slams into an iron nucleus in a steel slab, it may do little damage because the iron nucleus is like the bowling ball and the much less massive neutron is like the ping-pong ball and there is little energy transfer. However, if the neutron slammed into hydrogen in a lithium-hydride shield, the hydrogen atom and neutron have nearly the same mass and there can be much more energy transfer and therefore more damage. This is how the mass of the radiated particle and the molecular mass of the bombarded material affect radiation damage.

Charged particles and photons also interact much more with materials that have a high electron density (i.e. metals) than they do with materials containing fewer electrons per atom. As a result, protons can be stopped much more easily with a steel shield than in water (although the density of the materials also has an effect). However, even particles with a high charge (such as iron ions) can be hard to stop in high electron density materials if they have a lot of mass, as iron does. If someone throws a baseball at you at 20 mph, you can catch it in a glove easily, but if someone throws a bowling ball at you at the same velocity, it has a lot of inertia, which means it is not so easy to stop it. The same holds true for subatomic particles. So you end up viewing ions by their charge to mass ratio, which is a ratio of its ability to be stopped by electric field interactions vs. its ability to resist stopping through inertia.

Other stars emit the typical types of radiation as our star (electrons, protons, photons), but since that is day to day stuff and exists at very small quantities in our star system and at the same energy level as radiation from our star, it is negligible in its effects on people and satellites. However, GCRs are typically referring to heavy ions ejected at VERY large fractions of the speed of light from very high energy events like super-nova. They have a relatively to very high charge and are traveling at a very high speed, with a high atomic mass. This means that they have a charge that allows them to interact with the electric fields of other atoms. This process causes damage as it flies by the various atoms in a material ripping electrons out of their shells. But because they have an enormous velocity/energy and also have a high mass, they have allot of inertia and are not easily stopped. A shield or material may sustain as much damage from a few GCR collisions as it does from the flux of 10^9 solar protons collisions. The potential for radiation damage from GCRs increases as the mass and charge of the particle increases, so protons are the least damaging, hydrogen and helium nuclides are more damaging, carbon even a bit more with iron being amongst the most damaging.

Not the answer you're looking for? Browse other questions tagged cosmic-radiation or ask your own question.

25
What materials provide the best protection from cosmic radiation?
16
Is radiation dose from cosmic rays higher behind 50 cm of shielding, or lower?

9
How are nuclear thermal reactors designed for cosmic rays in space?
6
Could cosmic rays be produced by alien propulsion systems?
3
How does methane and LOX compare to water for radiation shielding
16
Is radiation dose from cosmic rays higher behind 50 cm of shielding, or lower?
43
How did Apollo missions solve the cosmic radiation problem?
5
Is it safe to consume food that's been exposed to cosmic rays?
2
Space-borne electromagnetic lens to focus energetic charged particles
4
When the magnetic poles of the Sun flip (once in 11 years), is the Earth hit by more galactic cosmic rays?
15
How can cosmic ray muons be used to replace GPS for positioning information in 3D on Earth and underwater?