Could a biohazard sample return capsule from Mars be safely hard landed on Earth?

There are some planetary protection concerns about backward contamination of Earth by returning samples from Mars, a mission which may well happen around the Earth-Mars opposition of 2025. One of the concerns is that the return capsule could crash during atmospheric entry and landing and spread its content in the atmosphere/ocean/crater.

(How) Could a capsule containing a few kilograms or so samples from Mars be landed without any risk of leakage during the landing process?

A couple of wild suggestions to begin with:

We believe so, but a lot of work remains to test and qualify a design to assure containment. These papers outline the approach, which is a simple, extremely robust parachuteless entry vehicle design. 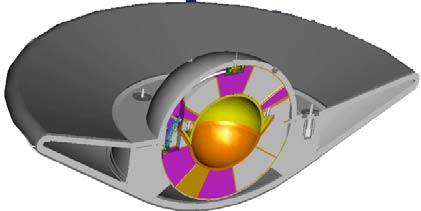 The risk of back contamination is quite small, and in fact, most likely happens on a regular basis, via Martian meteorites (At least, according to Robert Zubrin). And in fact, Martian bacteria would be very unlikely to be able to thrive on Earth, making their possibility of disease spread even less likely.

Wikipedia actually has several plausible scenarios on how to make the capsule safely. I suspect the following would happen:

As for the nuclear option, that seems rather harsh. There are less damaging ways that could be done that should be considered in the event of bad control.

Not the answer you're looking for? Browse other questions tagged safety life contamination sample-return reentry or ask your own question.

28
Are there any safe-to-launch alternatives to RTG's for outer solar system exploration?
8
Sample return mission to Mars
2
Is a ballistic blimp entry possible on this way?
12
Why use a Mars orbital Earth return vehicle for sample return?
5
Could the uncertain mass of the OSIRIS-REx sample affect the trajectory of the return capsule?
23
What skipped test on Genesis would have detected the backwards-inserted accelerometer which didn't deploy the parachute?
2
Did the Apollo Command module really “skip” within, or off of the atmosphere as a part of it's reentry program?