Why are spacecraft not air-launched from airplanes [duplicate]

I searched on the subject, thinking it could probably be cheaper to fly the spacecraft aboard a plane and then launch it from altitude. The only thing I found was this Wikipedia page, but it only enumerates advantages over ground launch without saying why it's not the traditional way of doing things. Knowing the X-15 was tested in the 50s, if it was the better option, it would be known since that time.

I think one the reason may be limitations on the payload for the plane to takeoff and fly to a sufficient altitude, but it shouldn't be a problem when sending astronauts on the ISS, for example. Any idea on this?

Because there is no plane that could do that. And even if there was one, you gain almost nothing from doing so.

A Boeing 747 can "only" carry about 120 tons. That's something like 5% the weight of the space vehicles mentioned above. You'd need 20 Boeing planes to carry one fully fueled space vehicle.

But how about the altitude gain? The 747 could carry a payload up to 14 km altitude, or so.

By comparison, the orbit of the International Space Station is at 420 km. The Hubble Space Telescope is at 560 km altitude. There are no orbits below 160 km (because they would decay rapidly due to drag), and most are above 200 km. Geosynchronous satellites are at 40 thousand km above Earth.

The plane would only cover about 2...3% the orbital altitude, or even much less.

As you can see, the numbers just don't add up.

EDIT: The wiki page you mention refers to special designs, where the whole vehicle is made for takeoff as an airplane or balloon; the airplane is basically the first stage. But this is not a mainstream solution currently, for reasons indicated above. It may work for very small vehicles.

Lots of good stuff on this topic in Wikipedia.: Air Launch to Orbit

A typical rocket spends the first few seconds going straight up (almost) to get out of the atmosphere. After that it spends almost all of its time accelerating to orbital velocity. Thus getting out of the atmosphere, while hard (rocket is heaviest at this point) is really only a very small portion of the process.

The mass you would need to carry to a higher altitude is so large as to exceed the capacity of the largest aircraft ever built, let alone a balloon.

Consider the case of StratoLaunch. They intend to build a carrier aircraft composed of parts from 2 Boeing 747 (in the top 3 of the biggest aircraft commercially available. (Update: The airplane named Roc has been completed and is undergoing runway taxi tests.) A380, B747, and C5 Galaxy are probably the biggest). It will be the largest airplane (in mass, wing length, etc) flying if it succeeds.

Even then, it can only carry a scaled down version of a Falcon (The original payload was to be a SpaceX Falcon 9 but with 5 engines instead of 9 and a concomitant reduction fuel/oxidizer load and thus mass). So the biggest aircraft yet to be built could only carry a smaller version of a medium size booster. Update: The Falcon 5 model was cancelled by SpaceX due to the large number of changes required. Orbital/Northrup Grumman's Pegasus will be the first booster, with larger models potentially to follow in 2022.

The primary benefit of air launch is not extra mass, but rather launch constraints. If you launch from a fixed site, you have limited launch options to differing orbits, and inclinations. An aircraft can in theory fly to wherever is convenient to hit the right orbital parameters. (Assuming there is a big enough runway for something the size of Stratolaunch vehicle within flight range fully loaded).

Currently, there is the example of Virgin Galactic's SpaceShip Two that uses the White Knight carrier vehicle, whose payload to actual orbit (LauncherOne if they actually build it) would be in the 100 kilogram range.

There was a European proposal to launch an orbital payload (in the 200Kilo range) from the top of an Airbus A300.

The scaling up, that would be required just does not work. 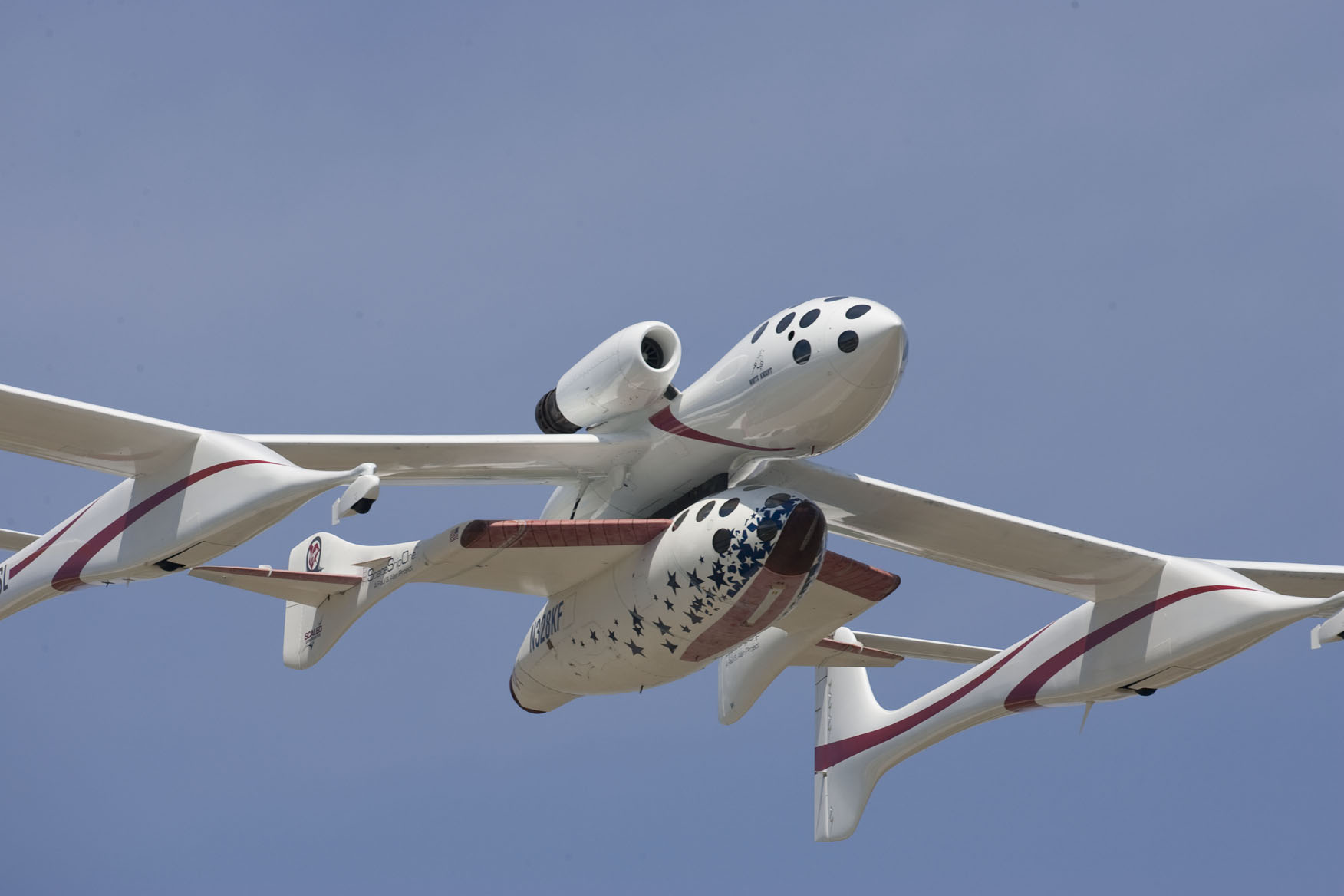 The picture above shows a picture of Space Ship One. on the jet powered 'carrier aircraft'/'mother ship' White Knight - that probably counts as an Aircraft.

However, I think these designs are only designed to reach low-earth orbit, not up high enough t carry a satellite, carry cargo to the ISS, etc

38
Why aren't all satellite-carrying rockets launched from airplanes?
2
Heavier Rockets Launched By Planes
48
Could it be possible to launch a rocket from a balloon?

31
Why are hydrogen-fluorine fuels not used for rockets more frequently?
11
Have all spacecraft on record been launched from land?
10
If Space Adventures actually does a Soyuz around the Moon, will this be the first real Earth Orbit Rendezvous launch?
38
Why aren't all satellite-carrying rockets launched from airplanes?
2
Why did the X-15 not achieve orbit?
4
Air-launching an Electron-like LOX-based rocket from a plane; technical challenges?
3
How would 2 spacecraft be launched to be in sync in opposite directions?
17
Are rockets faster than airplanes?