Let's examine your idea: you want to drop bomblets behind the rocket, and utilize product gases for propulsion.

Okay, here's hurdle No. 1: the time between pulses is wasted - nothing propels the rocket when there's no explosion. The obvious solution is to make pauses between pulses shorter. In the limit you'd "feed" a line of explosive as fast as it is "consumed".

Here we come to hurdle No.2: if you simply detonate the stick the process will be uncontrollable. That's a runaway reaction, can't be stopped and cannot be throttled. The speed of detonation is around 10 km/s, give or take, and that gives you an appreciation of the time constants involved.

In a high order explosion the pressure pulse and the heat load will vary greatly depending on the propagation of the detonation wave. To tolerate uncertainties in both, you will have to convert the thin skin of a rocket into thick armor which is self-defeating - you are simply carrying along all the stuff you don't need. And thickness only takes care of the pressure, not the heat load which you'll have to shed by other means.

That's why you don't want high order detonation, low order detonation/deflagration. You want controlled burning. And that's where solid and liquid rocket propellants come into play (although sometimes they don't obey your rules and force "rapid disassembly" of the engine).

We're back at square one. Leave chemical explosives for demolition work and propellants for, well, propulsion. 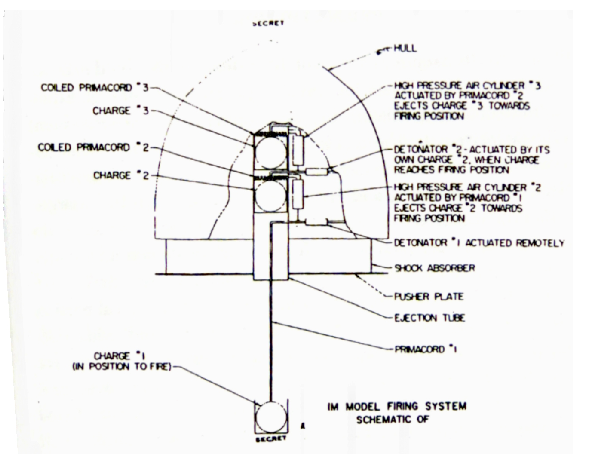 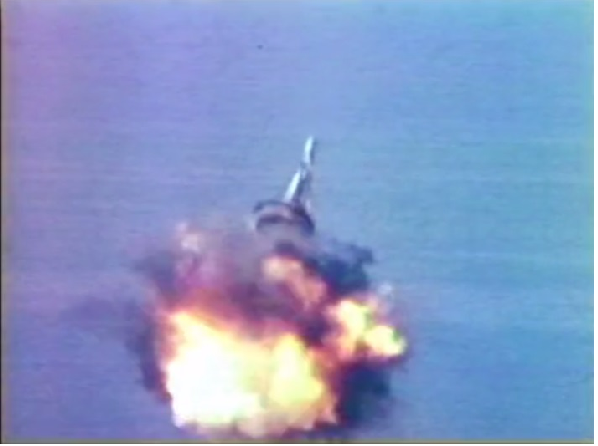 Traditional explosives are not viable for pulse propulsion because they are not powerful enough.

Pulsed nuclear propulsion was explored during the Cold War as a part of Project Orion.

The Orion concept offered high thrust and high specific impulse, or propellant efficiency, at the same time. The unprecedented extreme power requirements for doing so would be met by nuclear explosions, of such power relative to the vehicle's mass as to be survived only by using external detonations without attempting to contain them in internal structures. However the project was abandoned after the Limited Test Ban Treaty which prohibited all nuclear detonations above ground. The concept was also severely criticised for the risk it posed to ecology and human life.

The issue with using conventional explosives is that they simply aren't powerful enough. A pulse propulsion system relies on a massive specific impulse to the order of 1 mega-newton·s/kg. Nuclear bombs are the only explosive even vaguely capable of producing this force.

Even in later concepts of pulse propulsion, traditional explosives were never considered. Both Project Daedelus and Project Longshot discussed the use of inertial-confinement fusion reactors.

Chemical explosives are nowhere near as energetic per pound as rocket fuel. That's going to be brutal when it comes to the ISP of such a propulsion system. The rocket equation is brutal once you need energies that involve a vehicle that is mostly fuel (As all orbital launches are.) Brutal * brutal = total insanity.

Not the answer you're looking for? Browse other questions tagged propulsion spacecraft explosives or ask your own question.

9
Could explosives replace drilling for science and construction in space?
16
Pumped propellant propulsion - is it viable?
17
Why is (conventional) ramjet not used for 2nd stage of rocket propulsion?
1
Are there any new breakthrough propulsion systems for nanosatellites?
7
Is the propulsion for the Scorpion nuclear-thermal-electric ship concept viable and credible?