Space travel in convoy, what are the pro's and con's?

In the novel "The Mars Project" by Wernher von Braun humans fly in convoy to Mars. Is it being considered seriously at all today, to send several spacecrafts together?

Most proposed missions to Mars require pre-deployment of some payloads on Mars before humans arrive. If instead sent together with the crewed spacecraft, I can imagine some potential benefits. In an emergency the crew might evacuate to the surface habitat in flight. They could sacrifice one of the spacecrafts if they have better need for the fuel meant to land it. At Mars, they could teleoperate the landing of the spacecrafts, or maybe land in formation to make sure they all land within reach for the crew.

Drawbacks might be the risk of collision, difficulties of docking spacecrafts to transfer fuel, crew or cargo. And it doesn't seem possible to reliably make several simultaneous launches from the ground (although the military has that ability with solid launchers) so the convoy would have to get together in orbit. 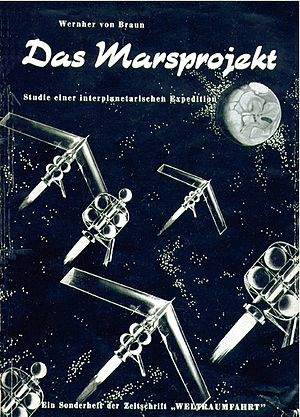 That's an interesting idea. There are several considerations to bear in mind here:

Space "convoys" will, in my fondest dreams, one day be extraordinarily common. The reason has very little to do with the traditional advantages of traveling together, i.e. Companionship, redundancy, etc. Docking spacecraft is hard enough to make that impractical. Instead you will see the convoys as a natural consequence of orbital mechanics.

To get from Earth to Mars or any other planet, you will probably use a Hohmann Transfer orbit.

These are highly elliptical orbits that stretch way out so that your aphelion reaches the target planet's orbit. Missing something as large as a planet is very embarrassing, so you plan a Hohmann transfer so that the planet arrives near your aphelion at the same time as the spacecraft. The lowest delta-V/thrust/fuel Hohmann transfers occur on a repeating "transfer window" cycle based on the orbits of the source and destination planets.

For Mars, the low delta-v transfer window occurs every two years. For Venus, it's every 15 months*.

Alex Moon's Launch Window Planner is a launch window calculator for Kerbal Space Program that illustrates this nicely. Getting from Kerbin to Duna can take as little as 1.7 km/s of delta-v or as more than 10 times that for the same travel time, all depending on when you do your trans-Duna-injection burn.

If we become a truly space faring civilization I expect you will see many craft that launch to LEO in the weeks before a colony transfer window. They'll shake down each craft, testing all the knobs and widgets before their long voyage. (Hopefully they'll fuel up from an orbiting depot too.) Finally, as the magic time draws close, you'll see them each light off one-by-one and slowly disappear from your window/viewscreen/telescope.

Travelling through space in a string of vehicles relatively close together, in the same trajectory, is expensive and unnecessary, as Deer Hunter points out.

But travelling to Mars, say, in a series of ships that are spread apart, maybe very widely, might make sense. One vehicle could carry people, and the others could carry supplies or fuel. They could be launched from several different pads around the world, which could be one way to spread out the cost. It might also let us spread out the cost over time. It might allow us to use existing rocket boosters like Delta or Atlas instead of having to develop new, more powerful ones (like the planned SLS.) The supply craft could be launched months or even years in advance, and take slow, cheap routes, while the manned ship might take the fastest trip possible, to minimize the crew's exposure to radiation. I believe that is actually one scenario for a manned trip to Mars. Robots might arrive first to build the habitat, probably underground, so that people could arrive and move in quickly. Robots would also start producing fuel, water, oxygen, maybe even food, so that it doesn't all have to be carried there from Earth. (On the other hand, why send people at all?)

The efficiency of interplanetary trips - the fuel and time required - varies significantly in time due to orbital mechanics. This means that if we assume some far future with significant traffic between, say, Earth and Mars, then we would expect to see most of ships in one direction being launched in the same few days where the trip is efficient, and then a pause for many months with trips made only if absolutely neccessary, as they require far more fuel and thus a different ship.

One additional risk from a convoy: If you do suffer a nasty strike a convoy means debris would be more likely to hit another ship.

On the flip side, a convoy means you have a better chance of rescuing someone from a damaged spacecraft.

Not the answer you're looking for? Browse other questions tagged mars spacecraft crewed-spaceflight conceptual or ask your own question.

13
Are there any plans to establish depots in space?
10
What are the synergies between human landing on the Moon and on Mars?
3
Could a small Mars Cycler be used for repeated sample and big data transfers?
2
What is the disk on NASA's anti-matter concept design?
13
Repurposing a nuclear submarine for space travel
8
What are these Space Shuttle cockpit elements and what are they for?
3
What is the correct rough estimation for the payload to kick-off a sustainable Mars colony?