My understanding is that probes within the Solar system primarily rely on Earth-based tracking networks and ephemeris data to navigate. Once they get really close to their destinations, they can optionally also use visual tracking to position themselves. But how would spacecraft, e.g., those on extrasolar voyages, navigate without Earth being in range to spoonfeed them positional information? "Old school" star navigation?

There are two problems here:

The prevailing mode of thinking considers X-ray pulsars to be the principal avenue of advance. This is called XNAV (x-ray pulsar-based navigation and time determination).

The underlying principle here is the stability of millisecond pulsars emitting in the X-ray spectrum. A combination of pulse counts from known MSPs is transformed into pseudo-ranges and solved in a filter like any other TDOA (multilateration) problem. Please note that it is more difficult and time-consuming than navigation using GPS, where pseudo-random sequences transmitted by satellites make it easy to disambiguate the position (pulsars emit the same pulses all over).

NICER: A battery of X-ray detectors planned for installation on the ISS 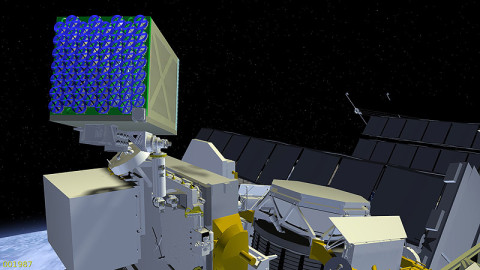 Approximately one dozen X-ray pulsars are presently known which emit strong stable pulses with periods of 0.7 to approximately 1000 s. By comparing the arrival times of these pulses at a spacecraft and at the Earth (via an Earth orbiting satellite), a three dimensional position of the spacecraft can be determined. One day of data from a small onboard X-ray detector yields a three dimensional position accurate to approximately 150 km. This accuracy is independent of spacecraft distance from the Earth. Present techniques for determining the two spacecraft coordinates other than range measure angles and thus degrade with increasing spacecraft range. Thus navigation using X-ray pulsars will always be superior to present techniques in measuring these two coordinates for sufficiently distant spacecraft. At present, the break even point occurs near the orbit of Jupiter. The Crab pulsar can also be used to obtain one transverse coordinate with an accuracy of approximately 20 km.

For attitude determination, star trackers are and will be enough in the foreseeable future.

This is currently an unsolved problem. In addition to the X-ray pulsars described by Deer Hunter, NASA funded a study into using exoplanets as a source for navigation data:

This proposal puts forth an innovative star tracker hardware sensor that allows for autonomous calculation of a spacecraft's orbit by employing Doppler Spectroscopy and Astrometric techniques. The proposed advanced star tracker provides onboard deep space orbit self determination capabilities through the use of specialized reference stars that have exoplanet companions. The motion of exoplanets around a reference star's barycenter provides a stable, highly predictable natural signal pattern. An advanced exoplanet star tracker enhances mission capabilities for future manned and unmanned space vehicles as well as reducing Deep Space Network (DSN) tracking requirements and resources.

This is far from ready, though:

Estimated Technology Readiness Level (TRL) at beginning and end of contract:
Begin: 2
End: 3 (i.e. it's in the 'research to prove feasbility' phase)

8
Autonomous Navigation for deep space missions
10
How do probes locate themselves?
7
How quickly could a craft find its location using only pulsars?

32
How could one navigate on Mars?
18
How do spacecraft navigate through the Asteroid belt to avoid collision?
12
How does a rocket navigate during launch?
21
How did astronauts navigate the Lunar Roving Vehicle (LRV) over the surface of the Moon?
1
How would an interstellar probe navigate the pull of gravity from stars and other large objects on the way?
4
How would you navigate an airship on Venus?
5
How can a deep-space spacecraft determine in real time the direction of delta-v?
7
A gedanken on being able to navigate back to Earth