Can a column of water pointed at the sun be used as a shield from solar flares?

There is an idea to use shadow radiation shielding for deep space craft to protect the crew in case of a solar flare. Will it work, and will it save mass? 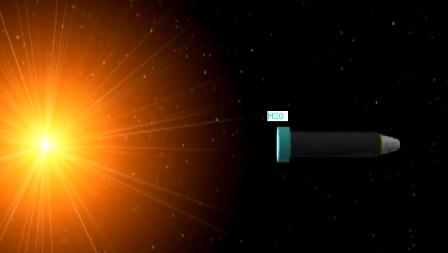 The typical space environment will consist of electron, proton and photon radiation. Each of these three particle types interact differently with different materials. Because of this, a spacecraft shield should consist of different materials in a layer-cake fashion to best shield against all particles. The water will due a pretty good job of stopping protons, because of the similarity in mass between the protons and the hydrogen atoms in the water. However, water does not do a very good job at stopping high energy photons (x-rays and gamma rays), nor does it do a good job stopping electrons. The electrons will bremsstrahl, creating a build up flux of photons, and the solar photons will undergo Compton scattering, which in turn causes a build up flux of electrons that will also bremsstrahl into lower energy photons. The water is great for protons, but you will probably want another shield layer or two of some material with a higher electron density to stop the photons and electrons.

This is an interesting concept. The water shield can both absorb and scatter particles and photons. If the water shield is shaped into a concave lens it can additionally refract photons, although high energy photons such as x rays and gamma rays are very difficult to refract, so the useful thing is likely to be scattering.

If the shield is very close to the spacecraft, then this scattering wont be very useful as the particles/photons, even scattered, will probably still hit the habitat, but if the shield is some distance away then incoming particles which are refracted or scattered are likely to miss the habitat entirely, the water column would thus effectively provide a shadow of reduced radiation independently of its ability to completely stop incoming radiation.

As far as I can see, the concept would work, and it would be more effective than a closer shield. One obvious thing, is that the closer the Sun is to being a point light source in the sky, the more effective it would be. In order to be effective, the shield should completely block the disc of the Sun as seen from the spacecraft (as in an eclipse). This would be very easy at Pluto, and very difficult at Mercury. So I would say the degree to which it could save mass, would depend largely on how far from the Sun the spacecraft is. One could say the concept is most useful where it is least needed.

Not the answer you're looking for? Browse other questions tagged radiation deep-space shielding or ask your own question.

8
Can the direction of a solar storm be predicted near Earth? Will it come from one direction?

10
Would a nuclear propelled spaceship still need a storm shelter?
3
Could Solar Cells provide Neutron shielding?
9
How thick must a shield be to be better than no shield at all?
3
How can SpaceX's Mars spacecraft be protected against solar flares?
7
Can you avoid the costs of cooling superconductors for magnetic shields by separating them from the spacecraft and using shades?
7
Does cosmic radiation have a predominant 'direction of origin'?