What are the required parameters for modern Earth-like life on a planet? [closed]

You often hear scientists talk about it: we have found traces of molecules that are necessary for life on Mars. But we all know that Mars is not habitable right now. It might have been, but we cannot live there now.

I am making a space exploration video game, and I'm wondering what properties a planet needs in order for Earth-like life to exist there. I know about the habitable zone around a star, temperature, atmospheric density, gravity, etc.

I would like to get a more complete list of every parameter on planets that makes unaided life possible.

Planetary Habitability depends on a whole host of parameters, I will attempt to summarise some of them. These represent the absolute basic characterises a planet should have to sustain life. I leave the advanced mechanisms of the actual creation of life to your creative freedom. 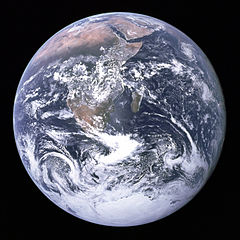 Our Earth, the only planet in our infinitely large universe known to harbour life. (Courtesy Wikimedia Commons)

Geologically, a small planet will have a high surface-to-volume ratio. As a result, most of the energy acquired during formation is lost, and plate tectonics do not tend to occur. Current research suggests that tectonic movement is vital for evolution, and of course, geothermal heat. Do note that exceptions to this rule exist, such as Io, which maintains it's tectonic system due to gravitational stress imparted by Jupiter.

Planets with a very low mass tend not to have the necessary gravitational pull to retain an atmosphere. For example Mars is less massive than the Earth, and has a much thinner atmosphere. A thin atmosphere means less heat insulation, less protection from radiation, and less protection from meteors. Additionally a minimum atmospheric pressure of $0.006 atm$ is required for water to exist in it's liquid form.

On the other hand if a planet is too large, then it's surface gravity starts becoming an issue. Any life on that planet would have to evolve to withstand the high gravity. However presuming such evolution can take place, larger planets are more suited to harbour life. They have a tendency to create magnetic fields from their iron cores, protecting the planet from radiation.

The Earth has an orbital eccentricity (very roughly, deviation from a circular orbit) of 0.02. This means the the distance between the Earth and the Sun stays more or less the same over the period of a year. Hence, heating is uniform year-round.

If a planet has a high orbital eccentricity, then it will go through massive swings in global climate over the course of it's 'year'. These fluctuations could be too severe for any life to evolve.

Rotation and tilt are two important factors, being responsible for seasons. Rotation should be fast enough to maintain a reasonable day-night cycle. If it is too slow, then the large difference in temperature each day would cause issues. Rotation also influences the magnetic field of the planet by inducing a magnetic dynamo in it's iron core. Finally, there is significant scientific evidence that the presence of the Moon is a crucial factor in stabilising the Earth's tilt.

Assuming that extra-terrestrial life is similar in composition to life on Earth, four fundamental elements are required; Oxygen, Carbon, Hydrogen, and Nitrogen. However since this is a video game you are developing, I presume you have the artistic freedom to create new, different mechanisms for life. Thus, I shall not elaborate more here.

Once you have your planetary characteristics sorted out, it's up to you to define further parameters for life to exist on that planet. What type of star is it orbiting? Are solar winds frequent, and how do they affect the planet? Does the planet's solar system have an Oort Cloud, hurling massive asteroids through space, causing mass extinctions after a fixed time period?

Life is fascinating because it is the single most complex phenomenon we have observed so far. Only your imagination limits the world you can create. Do some research on your own as well, read up on evolution and biochemistry. I wish you the best for your game!

Earth like life ... lots of luck. the proteins and water seem to come from the cold outer areas of a solar system. if in the goldilocks zone and given enough time I would submit that the same thing that happened here would repeat itself.

remember that there was once many zillions of life forms on this planet. with many different mechanisms of biology. then it came to pass that one evolved and created this poisonous gas, killing off most of the life. that gas, oxygen produced by algae, separated the life forms into two basic types aerobic and anaerobic. some of the latter persist to this day. viruses were part of that old pool of life too.

Not the answer you're looking for? Browse other questions tagged life goldilocks-zone or ask your own question.

8
What is meant by 'Organics' when discussing space exploration?

14
What properties are used to quantify the odds of a star harboring earth-like life?
12
Are we searching for life "as we don't know it"?
10
Does NASA have a plan to search for the life in Europa?
12
What existing life on Earth is best suited for the Martian environment?
5
How does the presence of water on a planet indicate a likelihood of life?
3
How possible is it to have a habitable planet with no moon like Earth has?
4
Methane and the Search for Life on Mars
3
Is Titan still the best bet for Extra-Terrestrial life?