What happens to defunct lunar and Mars rovers? What technological barriers prevent humanity from creating a perpetual rover?

What happens to defunct lunar and Mars rovers? 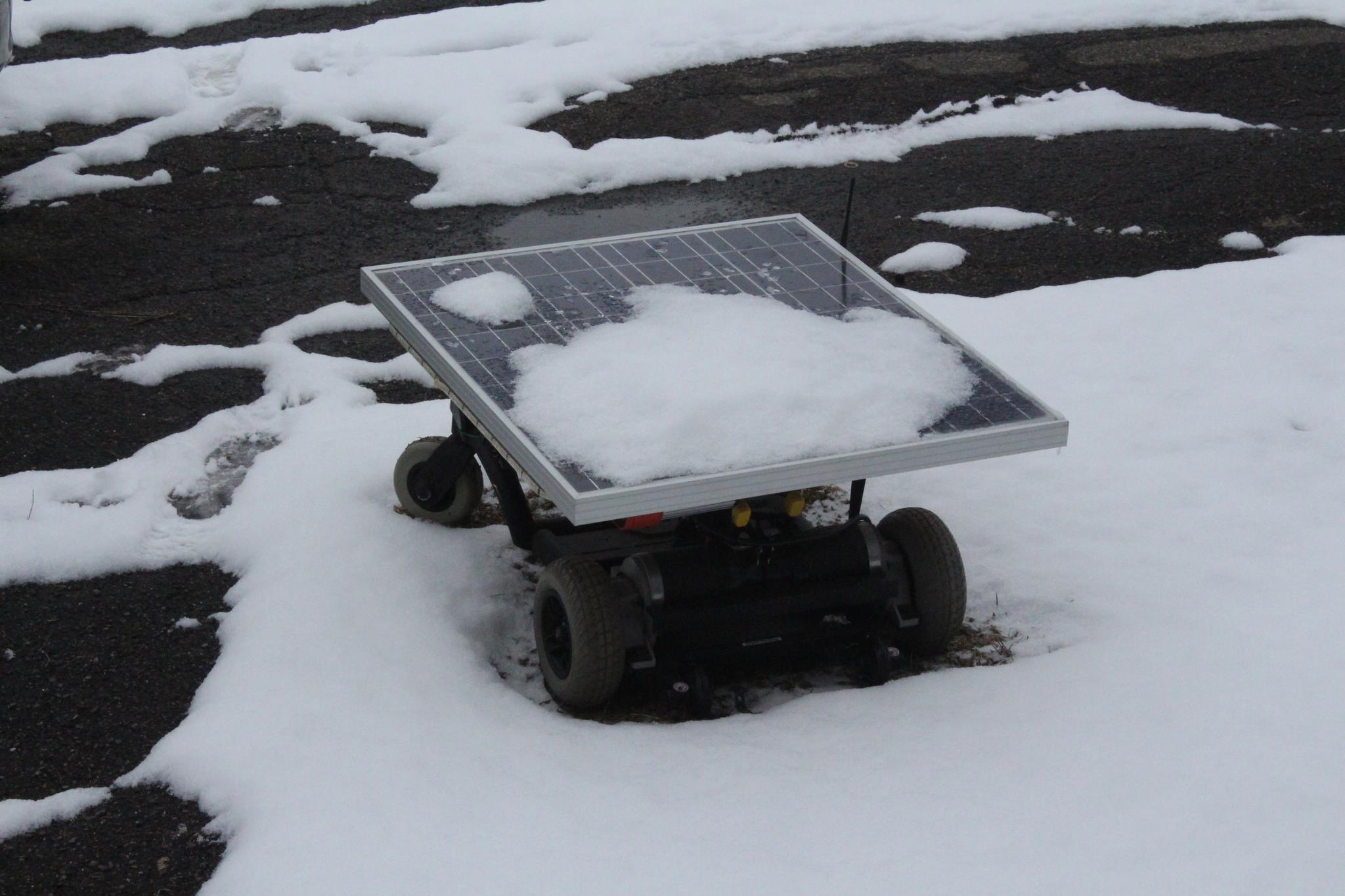 What technological barriers prevent humanity from creating a perpetual rover with sun batteries or nuclear portable reactors for use on Mars, the Moon, etc., with daily visual transmissions and scientific data transmissions forever?

If radiation was the main issue, does humanity now have the technology to overcome this?

For example, this device named Zephyr can, in theory, fly forever in the Earth's atmosphere.

Earth's temperature swings from extreme to extreme is quite moderate. That is, coldest is generally around -40C and warmest is around 40-45C.

The Moon has two weeks in blazing hot sunlight, much hotter (depending on your reflectance) but well over 100C, and two weeks of much much colder. Not quite absolute zero (-273C), but pretty cold to around -173C.

That is a 273 degree Celsius difference. Versus, worst case of 80C on Earth. Things expand and contract a lot more over 273 vs 80. So designing circuitry that can handle the extremes is tough. Most commercial circuit boards will crack due to thermal expansion alone. Welds/solder are very tough to maintain across these temperature variations.

Most rovers and other probes that have an RTG, use it for heat, as much as for power as, to keep them warm overnight.

Mars is not as bad since it actually has an atmosphere to moderate it a bit. The temperature swings are not as bad, but still pretty bad. From a high of 20C to -153C (173 degree vs 273 for the moon).

Clearly it can be done as the current rovers have shown, but it is tricky and hard. It requires hibernating and using battery power to keep the heat going for some of it.

The moon, lacking an atmosphere does not have much to protect from solar radiation. Mars has a bit better having a thin atmosphere.

Stuff breaks. Nothing lasts forever. Grease needs to be replaced eventually. With no way to fix it, more redundancy is required. However, because launches are so expensive, you are limited by mass.

Both the moon and Mars have surprisingly fine dirt that seems to get into and onto everything. The Apollo astronauts had trouble getting it off the space suits after the moon walks. Mars also has a lot of dust, as the various rovers have shown.

This stuff destroys moving parts as it manages to get in there somehow.

If you use Solar arrays for power on Mars, it also covers the arrays reducing power, as the wind deposits it. The Opportunity/Spirit missions found that the wind both deposited, and occasionally cleaned off the dust.

Now you need a solar array cleaning mechanism to maintain power, and yet another mechanical component to break, far away from anyone to fix it.

Rechargeable batteries have finite lifespans before they stop holding charge, or before it degrades to a level too low to survive.

Moving parts can be affected by the dust, but the bearings and some kind of grease will eventually wear out.

While not a technological limit per se, when funding runs out to run the program, even if the vehicle/orbiter/probe is still working, it may have its life cut short by program management.

In addition to Geoff's answer, the comment by Garan contains a major reason why things stop working eventually. Any machine with moving parts is subject to wear and tear. You can keep a machine going for very long if you maintain it; look at the steam engines in various industrial heritage museums for instance. These machines are/were monitored constantly by a man with an oil can, and parts were swapped out or repaired when needed.

A planetary rover is a whole different ballgame: we can't maintain or repair it. Once a part malfunctions, it's gone for good. With careful design, you can add some redundancy. Every rover we've built has at least two main computers: if one fails, the other can take over.

For mechanical parts, this is more difficult. Wheels for instance, are a major point of failure: the wheel itself gets damaged, and there are lots of sensitive moving components (see Geoff's comments on bearings). If you want to be able to jettison a damaged wheel assembly, you're adding more moving parts and more chances of failure. Adding the mechanics to replace damaged parts makes things even more complicated, making the rover larger and heavier, which quickly makes the project more expensive.

In addition to the technological barriers, there are two major reasons not to build rovers for a very long lifespan:

Yet another reason is how much data you can squeeze. A rover is a very limited lab, and after some time, it has gathered all data it can from a specific area. They are slow, so travelling to far away lands is very impractical.

Curiosity, the most advanced rover, has a mean speed of 1 cm/s on flat land. It takes more than a full day to travel one kilometre on ideal conditions. On the actual surface, you have to avoid rocks and climb up and down hills; that will probably reduce the speed by a rough factor of 2. My hometown is about 200 km away from the next geological unit, so it would take Curiosity more than a year to just get there, without stopping to do science. So far, including scientific experiments, it has travelled about 5 km in almost two years, so the actual mean speed is less than a millimetre per second..

Of course in the same area there are different kinds of rocks, and it takes a long time to fully sample an area, and you never know when you are going to find a new thing. But even then, the investment necessary to get the next big new thing is huge (because it is far away). And, by the time the rover has gotten there, we could have sent a new one, with better more sensitive equipment, to another part of Mars looking for exciting more new things.

Spirit's wheel went out halfway through it's mission bc dust got in the main circut, grinding it down and causing it to break. So, dust might be a BIG issue. To answer your question, dead rovers typically just stay there, and sometimes get buried by dust shifting around (To be fair, only one rover has been totally buried.) but some, like soujourner for example, only seem to be dead, as Mars Recon Orbiter (MRO) found out back in 2009 when it passed Ares Vallis and SAW soujourner slowly but surely driving around MESUR pathfinder's dead body.

Deko RevinioDeko Revinio
1111 bronze badge
New contributor
Deko Revinio is a new contributor to this site. Take care in asking for clarification, commenting, and answering. Check out our Code of Conduct.
$\endgroup$
3
Add a comment  |

Not the answer you're looking for? Browse other questions tagged mars the-moon rovers technology or ask your own question.

11
Would a flywheel energy storage have a distinct advantage or disadvantage in zero or low gravity?
10
How long can probes function, e.g. New Horizons? Can and should we build "century probes"?

17
What technological barriers, if any, prevent a manned mission to Mars at this time?
12
What risk management options are available for Mars orbiters and rovers to mitigate threat of impacting with Siding Spring cometary debris?
10
What is required to produce rocket quality methane fuel and oxygen from Mars' atmosphere?
9
What was the driving record of each rover on Mars in one sol, and when?
5
What precautions are planned to prevent samples returned from Mars crashing and releasing organisms on Earth?
12
The Chinese Mars rover and lander can be seen in the same picture. What device took the photo?
4
What would be the trajectory and initial speed of a chunk launched from Phobos to get as close as possible to any pole of Mars?
8
What was it actually like driving the Lunokhod lunar rovers live from the ground? What were some of the biggest challenges?