Was Hipparcos Satellite really necessary? Can't Hubble do everything that Hipparcos did?

I've been reading about the Hipparcos Satellite recently and it seems it was the first big telescope with precision-measuring devices to accurately pinpoint a star's location in the sky.

I know Hipparcos was launched in 1989, and Hubble didn't come till 1990 (and its optics weren't corrected till 1993), but I thought Hubble was planned a lot earlier and could do such things as star mapping.

Am I wrong? Can't Hubble accurately measure star positions? And it seems to me that Hubble's large mirror could do it better than Hipparcos.

The only things I can think of:

EDIT: I'm asking this question not because I want to sour-grapes NASA or ESA or anything. I'm trying to understand why different telescopes are apparently needed for similar things. Just looking at Hipparcos compared to Hubble, they look very different. But I could have sworn Hubble is capable of doing the same kind of star mapping.

EDIT 2: My understanding is that Hubble has Control Moment Wheels so it can very finely adjust and maintain its attitude (direction). This, plus Hubble's apparently much bigger light gathering power, seem to imply that it can do the same job as Hipparcos.

As @Vedant Chandra says, Hipparcos was dedicated to astrometry. To do this properly, you need to make sure your measurements are accurate. The pointing accuracy of your satellite is a nice specification, but a system that does not rely on this can achieve more accurate measurements.

To do this, Hipparcos looks in two directions at once. The telescope combines two images from sky regions 58 degrees apart, and measures star positions relative to each other. This eliminates the satellite itself as a source of errors.

Hubble was made to be pointed at a tiny region of sky for a long time, to observe faint objects. Hipparcos, on the other hand, spins continuously and measures stars as they move across its field of view. It also looks at a much larger area of the sky than Hubble.

So, yes, Hipparcos was necessary and its measurements could not have been made by Hubble.

The Hipparcos satellite was solely devoted to astrometry. It did not take 'regular' images, it used an eccentric Schmidt telescope to overlay images onto a grid. It finally resulted in a catalogue of stars, not an archive of images. It's purpose was to detect and find the position of stars in the sky.

An 'image' taken by Hipparcos. As you can see, it's more of a measurement than an image. (Courtesy Wikimedia Commons

The Hubble space telescope was exactly what it says on the box; a telescope. It consisted of five scientific cameras and a Ritchey–Chrétien telescope. It's function is to take advanced images of distant worlds in incredible detail. 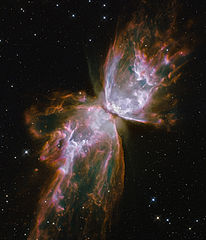 As you can see, their functions were completely different. Hipparcos was far more accurate when it came to astrometry, and Hubble could not 'replace' it in that aspect.

Not the answer you're looking for? Browse other questions tagged artificial-satellite astronomy hubble or ask your own question.

76
Was the NOAA-N Prime satellite really dropped on the floor?
18
Was Hubble really related to spy satellites?
3
Hubble's one-gyro mode; how does it work for attitude control, stabilization, and slewing?
3
What were the relative orientations of the Hubble Space Telescope's three star cameras, six rate gyros and four reaction wheels optimized for exactly?