Pluto's satellites other than Charon orbits around Pluto or center of gravity between Pluto and Charon?

As the center of gravity between Pluto and Charon is outside Pluto does Pluto's satellites other than Charon such as Nix, Hydra, Kerberos or Styx orbits around Pluto or the COG?

The other moons orbit around both Pluto and Charon, so in a way it is accurate to say that they orbit the Pluto-Charon system rather than just Pluto, since Pluto and Charon orbit a center of gravity outside of Pluto. For now, the IAU has not pursued classifying Pluto-Charon as a double planet, so the moons are all said to be satellites of Pluto.

There are potentially stable Pluto-centric* orbits in the Pluto-Charon system, but so far nothing has been detected in the Sailboat Island of Stability or anywhere else along the New Horizon's flyby trajectory. Otherwise, like the other three answers before me said; All of them, Pluto, Charon, Nix, Hydra, Styx and Kerberos orbit a common center of gravity, the barycenter, that's slightly outside of Pluto's body:

*Even any other Pluto-centric orbits around Pluto but not also around Charon or any other satellites in the system would technically orbit around the system's common barycenter, but on top of that also be periodically (resonant orbits) or chaotically perturbed by gravitational influence of Charon and other satellites, so their orbital focus wouldn't be exactly at the common barycenter exactly all of the time. But on average, over time, and assuming they're not perturbed out of the system or hitting any other body, yes. Even multiple focal points of S-type orbits would converge at the barycenter of the Pluto-Charon system.

They orbit the barycenter of Pluto/ Charon, as there is no other place for them to orbit. Their orbit extends beyond the Charon, so thus the only stable orbit would go around both objects. See this image from Wikipedia. 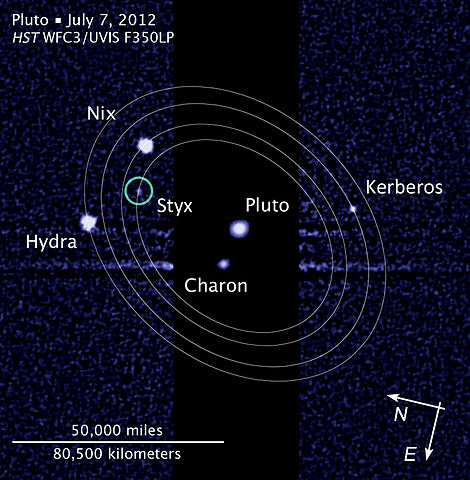 TLDR: If we feel we have to mention Charon every time we speak of the Plutonian system, then we should give the same privilege to all the other moons as well, as even they contribute to the COG; even if, admitedly, not to the extent of being able to move the COG to inside or outside of Pluto itself. So, we would have to say that Nix orbits the COG of the Pluto-Charon-Styx-Nix-Kerberos-Hydra system, and that sounds clumsy. So we usually say that Nix orbits Pluto.

I'm not a physicist, but rather a logician and linguist by education. So let me try a logical analysis of the question to complement the existing great answers. The question sounds to me like "Does Earth orbit the Sun, or the COG of the Sun-Jupiter system?"

Whether the center of gravity is inside or outside of the heaviest body in the system has little bearing on the answer. The center of the solar system is frequently outside of the Sun, depending on how the planets are distributed at the time.

Even the "Plutonian system" is just a figure of speech, a simplification. It was discovered the way it was because Uranus and Neptune are paying occasional visits to the club, too, presumably perturbing the moons unevenly in the process.

The four moons (Nix, Hydra, Kerberos and Styx) all orbit around the centre-of-gravity of the Pluto-Charon binary system.

Image from the Hubble Space Telescope highlighting the orbits of the four moons. You can clearly see that they are orbiting the barycentre of the system. (Courtesy Wikimedia)

More details about the exact orbits of the moons will come out soon, as the New Horizons probe sends back data.

Not the answer you're looking for? Browse other questions tagged gravity pluto moons or ask your own question.

15
What is a "Sailboat Island of Stability"?
8
Earth-Moon system barycenter

9
Why were Nix, Cerberos and Styx discovered later than Charon?
11
What causes Pluto's atmosphere to recede/collapse?
4
Latitude and longitude lines for Pluto and Charon
19
Would my weight be constant on Pluto?
15
If we could send an orbiter to the Pluto-Charon system, could we put it in a stable orbit?
9
Compounds causing the various colors on Pluto's surface?
12
How "locked" are Pluto and Charon? How much does each librate as seen from the other?