What is a Michielsen chart and how should one use it?

I've read about a Michielsen chart, but cannot currently find Kaplan's 1976 book. What is this chart? Is it outdated nowadays?

Michielsen devised a graphical display for all lunar transfer information, including passage effects, on a single plot. This chart is presented in Fig. 7.9 [missing from preview, see below] with an application to the Apollo 11 Mission. The $v_r$ axis is calibrated in km/s, but is directly related to transfer time. Thus, each value of $v_r$ associated with the transfer orbit corresponds to a unique value of transfer time. The two vertical lines marking the constant values of $v_\theta = \pm 0.19\text{ km/s}$ at $r_\text{M}$ are calibrated in days to reach $r_\text{M}$, i.e., the transfer time from Earth to the Moon. Transfers which have $v_\theta = + 0.19\text{ km/s}$ are direct and those with $v_\theta = - 0.19\text{ km/s}$ are retrograde.

The Earth intercept zone connotes return to the Earth without any thrusting maneuvers.

since the Moon is assumed to be in a circular orbit about the Earth. So the point $v_\theta \cong 1\text{ km/s}$, $v_r \cong 0$ is the orbital velocity of the Moon with respect to the Earth.

A probe's approach $(v_\theta, v_r)$ is specified by the transfer trajectory. Hyperbolic passage of the Moon is handled in an analogous manner to that for planetary passage.

As the spacecraft reaches $r_M$, the Earth's gravitational attraction is "turned off" (in the model). The deflection angle $\delta$ measures the turning of the spacecraft's velocity in the Moon-relative hyperbolic trajectory. A typical velocity vector diagram for lunar passage is shown in Fig. 7.10. Since the spacecraft passes in front of the Moon, the turn angle $\delta$ is taken clockwise and geocentric energy is decreased via a gravity assist (see Fig. 3.18 [missing from preview]). These vector triangles predict the probe's departure velocity $v^+$ from the Moon.

Instead of the missing Fig. 7.9 from the quote source, here's Michielsen Chart for Lunar Encounter from the Marshall H. Kaplan, Modern Spacecraft Dynamics and Control that you mention, taken from Robert Stengel's (Princeton University) untitled lecture slides (PDF, approved for educational use), page 7. Sharpened a bit for clarity but I do apologize for its quality, it's the best I could find: 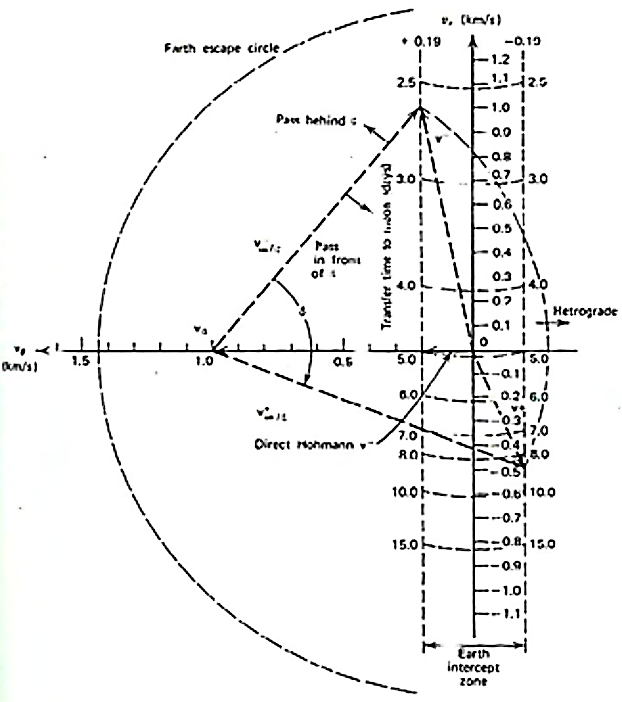 Not the answer you're looking for? Browse other questions tagged orbital-mechanics history terminology reference-request ballistics or ask your own question.