Does Earth get in Hubble's way?

Hubble takes very long exposures for its images so that it can collect enough light to see very distant objects. These exposures can be several hours, or even several days, long. I often read that the Hubble Ultra Deep Field image was taken with a 1,000,000 second exposure.

It takes Hubble about 97 minutes to orbit Earth once, so while it's orbiting Earth how do they manage to keep it focused on a single point? When Hubble goes behind Earth on its orbit, wouldn't Earth get in the way of the image?

This is explained in detail in Wikipedia on Hubble Ultra-Deep Field: Planning, with perhaps the simplest way to imagine it being this illustration: 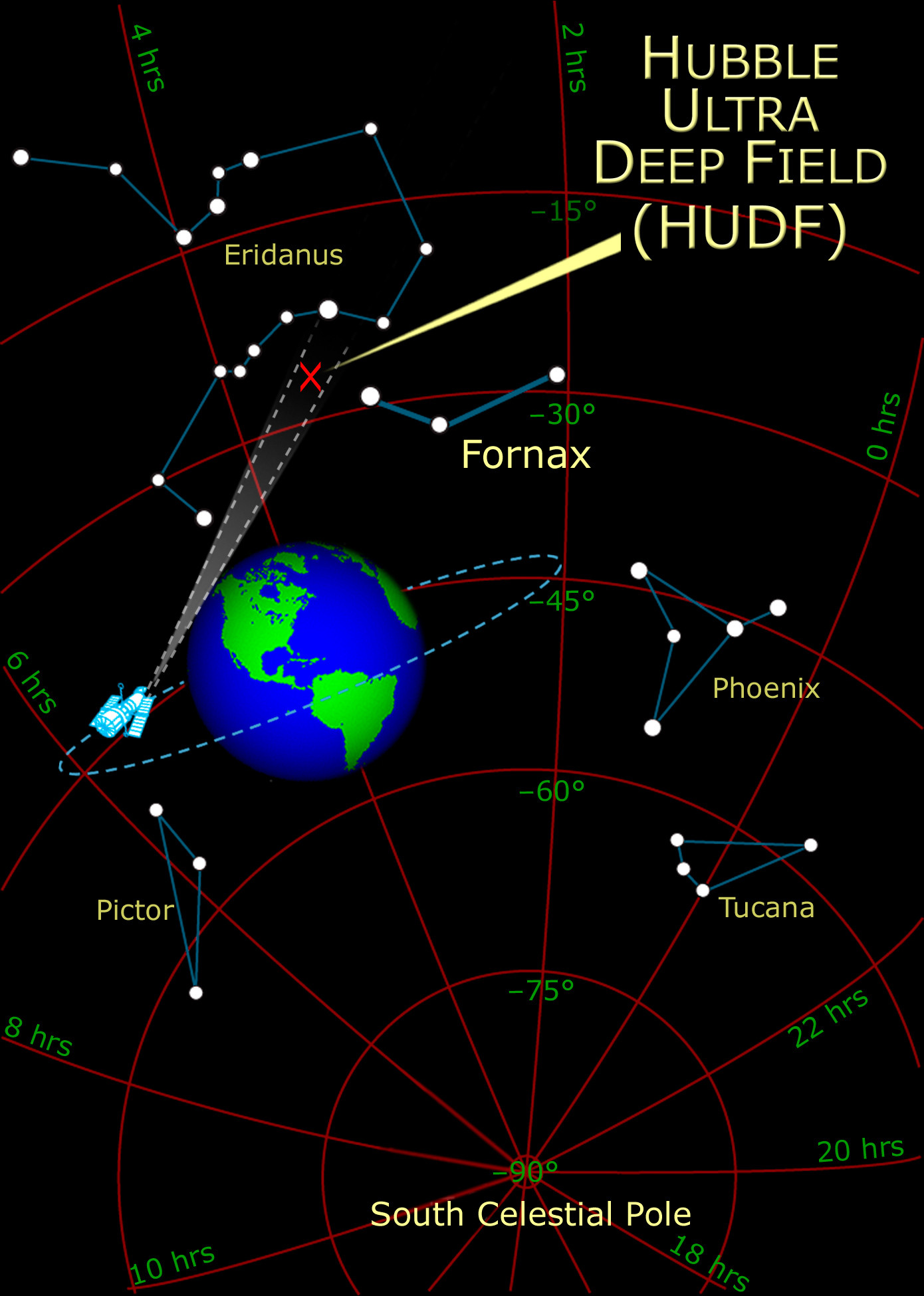 Location of the Hubble Ultra Deep Field in the space. Image source: Wikipedia

While the location of HUDF, like explained in the Wikipedia article, isn't within the Hubble's Continuous Viewing Zone (CVZ), Hubble Space Telescope's (HST) orbit during those roughly 11.5 days (a bit over 174 orbits) effective, allowed for long continuous observations of the area in multiple sessions, without the Earth getting in the way:

The observations were done in two sessions, from September 23 to October 28, 2003, and December 4, 2003, to January 15, 2004. The total exposure time is just under 1 million seconds, from 400 orbits, with a typical exposure time of 1200 seconds. In total, 800 ACS exposures were taken over the course of 11.3 days, 2 every orbit, and NICMOS observed for 4.5 days. All the individual ACS exposures were processed and combined by Anton Koekemoer into a single set of scientifically useful images, each with a total exposure time ranging from 134,900 seconds to 347,100 seconds. To observe the whole sky to the same sensitivity, the HST would need to observe continuously for a million years.

More on this in Wikipedia on Hubble Ultra-Deep Field: Observations.

Not the answer you're looking for? Browse other questions tagged orbital-mechanics observation imaging hubble space-telescope or ask your own question.

4
How does possible orbital eccentricity vary with distance from the Sun?
9
Why was Kepler's orbit chosen to continue to drift away from Earth?
9
How (the heck) can 2014 MU69's orbit be know well enough for a close flyby by New Horizons?
6
Timing shadows from the Kuiper belt! Any news? Did it work?
7
What is synthetic tracking, and why would a 35 cm Earth imager be 10-30x better than Pan-STARRS or LSST for interstellar asteroid discovery?
2
Hubble's one-gyro mode; how does it work for attitude control, stabilization, and slewing?
5
Two 1000 kg gold spheres orbit their CM in near-contact, great way to measure G or limited by spaceflight issues?
2
Did SpektrRG make a “u-turn”, and how does this ground track remain a steady 6° above the equator?
4
Would it have been cheaper and/or faster to put a James Webb-like Space Telescope on a balloon instead of a rocket?