What went wrong with the CRS-7 launch?

Today's CRS-7 launch from Cape Canaveral (unfortunately) ended rather spectacularly, with an explosion about a minute after reaching Max-Q (maximum dynamic pressure), and with the rocket apparently disintegrating afterwards. The mission blurb said that an 'anomaly' had been observed, and engineers were looking into it. 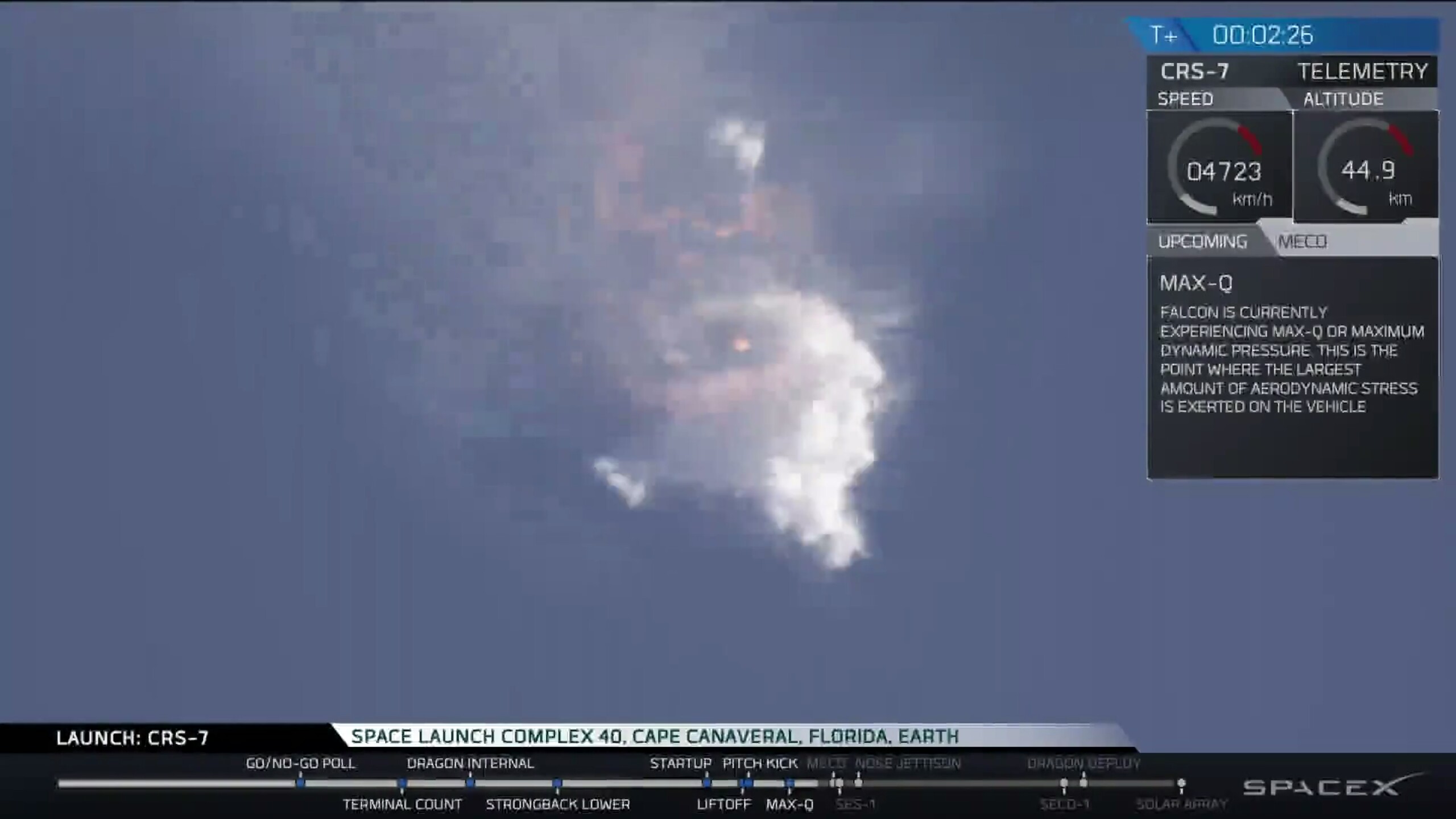 From the live SpaceX feed, a few seconds after the explosion.

What exactly went wrong with the launch? Whose fault (if at all) is it? What corrective measures will they take to secure future launches?

Note: I understand that more details will come soon, I'm looking for an answer compiling the best information to answer my three questions.

Preliminary conclusion is that a COPV (helium container) strut in the CRS-7 second stage failed at 3.2Gs. We analysed a lot of data, took 0.893 seconds before first sign of trouble and end of data. Preliminary failure arose from a strut in the second stage liquid oxygen tanks that was holding down one composite helium bottle used to pressurize the stage. High pressure helium bottles are pressurized at 5500 psi, stored inside in LOX tank. Several helium bottles in upper stage. At ~3.2 g, one of those struts snapped and broke free inside the tank. Released lots of He into LOX tank. buoyancy increases in accordance w/ G-load. Data shows a drop in the helium pressure, then a rise in the helium pressure system. Quite confusing. As helium bottle broke free and pinched off manifold, restored the pressure but released enough helium to cause the tank to fail. it was a really odd failure mode. Data indicates helium tank did not burst.

What Happened?
At T+139 seconds after launch, the second stage Liquid Oxygen Tank(LOX) experienced an overpressure event. The Falcon 9 flight computer determined a failure had occurred and activated its Flight Termination System. Dragon decoupled from the rocket and made a hard impact in the Atlantic.

Why did this happen?

We will not know for sure until SpaceX releases more information which will not occur until after their investigation is closed. However we can do some basic detective work based on the information that's been released so far.

There was an overpressure event in the upper stage liquid oxygen tank. Data suggests counterintuitive cause.

Just before Main Engine CutOff(MECO), the second stage disintegrated. Elon Musk said that the LOX tank experienced an overpressure event. Basically, the tank ruptured from the inside out. The tanks of a rocket form its main structure. Once the tank failed, the aerodynamic pressure from the leading edge destroyed the second stage and Dragon detached and fell off.

Did the landing attempt cause this?

Both the Dragon capsule and Falcon 9 first stage were performing nominally and were sending telemetry back to ground after this event occurred. In the video, you can see that the first stage engines keep firing for a few seconds after the initial explosion. None of the landing modifications(fins, legs, etc) were the cause of this incident.

If the the problem was with the second stage, why did the whole rocket explode?

Every Falcon 9(and almost all rockets in general) have a Flight Termination System(FTS). This is usually a line of plastic explosive(C4) that runs down the body of the rocket. There are many reasons why this system is in place. It is better to blow up a rocket once it starts going out of control than to let it fly in an uncontrolled direction and crash. Also rockets contain an immense amount of chemical energy in their fuel. Crashing those tanks can cause the fuel to compress and ignite all at once creating a massive explosion. The FTS 'unzips' the tanks, allowing it to burn in the air instead of exploding. The Antares Failure resulted in a large fireball, but the FTS was actually activated before it hit the ground, preventing a lot of serious damage to the pad.

Since SLC-40 is an Air Force base, the Air Force has the responsibility to maintain Range Safety. They have a metaphorical big red button that will instantly destroy the rocket if it deviates from the flightpath. However the Air Force didn't blow up the rocket, the Falcon 9 did it itself. Once the rocket clears the range, it is now SpaceX's responsibility. Usually they would have someone also holding a big red button. However SpaceX implemented an automatic FTS based on GPS as well as the rocket's own sensors. Once the vehicle detected the failure it automatically "safed" itself.

Why didn't SpaceX try to land the first stage?

Landing a 150 foot tall rocket stage is already an improbably hard task. The second stage disintegrated close to Max-Q, where the rocket is under the most air pressure during its flight. It's highly unlikely the stage could have maneuvered sufficiently to attempt to land. Also the incident occurred close to shore(~13km) while the landing barge was 318km from shore.

Whose fault (if at all) is it?

This is a tricky area. SpaceX's rocket exploded. Something went wrong in either the manufacturing or engineering of the vehicle causing it to fail. However, the contract awarded to SpaceX by NASA, like most launch contracts, is based on launch attempts not successes. Since SpaceX successfully got the payload off of the pad, they will still get paid.

What corrective measures will they take to secure future launches?

The first measure, unfortunately, is that Falcon 9 is grounded until the problem is resolved.

Cause still unknown after several thousand engineering-hours of review. Now parsing data with a hex editor to recover final milliseconds.

The next step is to gather as much data as possible on the incident. That includes all pictures, any debris they can recover, as well as the telemetry the rocket broadcast during flight. There were over 3000 telemetry sensors on CRS-7 according to the post-incident briefing. Then what is called a Fault Tree Analysis will begin. SpaceX engineers will work back from the smallest changes in the rocket to find what went wrong in the second stage LOX tank.

There is some hope in that the SES-9 launch is/was supposed to be the introduction of the Falcon 9v1.2 "FullThrust" which uses its engines at full throttle, uses densified LOX, and has an improved/lengthened second stage. If the problem has already been fixed on v1.2 then we could see Falcon flying relatively quickly.

Not the answer you're looking for? Browse other questions tagged launch spacex failure or ask your own question.

16
Who pays when a mission to the ISS fails?
7
Where are the COPVs on Falcon 9's second stage?
0
What happens when a rocket explodes (specifically, the SpaceX CRS-7 mission)?

12
What went wrong, Falcon 9 1.1 first flight with first stage landing attempt?
7
Did something go wrong during the Soyuz TMA-13M launch?
8
What went wrong during the OG2 Mission 1 launch attempt on June 20th 2014?
28
SpaceX CRS-5 Launch: What is the footage that appears to contain bubbles?
7
What will the next ISS resupply launch be named?
19
Why is the F9-029 Amos 6 case more complex than the F9-020 CRS-7 explosion?
14
Why does the CRS-8 Falcon 9 rocket appear to be swaying before launch?
2
What is wrong with this burn time calculation?
5
What went wrong during SpX-DM1