How long have we known Pluto is red?

Recently the New Horizon's satellite has given us some lovely color images of Pluto. 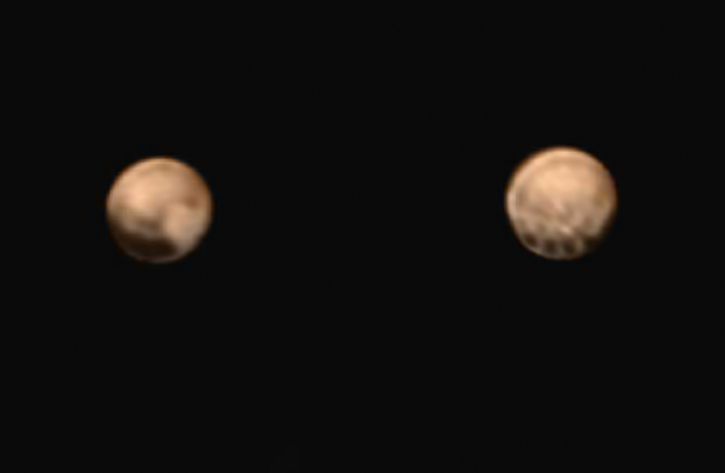 When did we first discover that Pluto is red? Secondly, did we suspect its color was red before we were able to verify it?

But the images do show Pluto is significantly redder than it had been for the past several decades. Astronomers use the word “red” to mean it reflects more red light than blue or green light. To the human eye, Pluto has a yellowish-orange color, and is about 20% redder than it used to be. “It’s not as red as the surface of Mars, but more red than Io,” Buie said.

Red is usually associated with carbon. The astronomers said there is also methane, which is not usually stable in an environment like Pluto’s.

“This business about the color change had me scared for awhile,” Buie confessed. “I got the result years ago, but it was so hard to understand and believe. I’m still nervous about it. It could be that I completely screwed this up, but I can tell you Charon is on the same images, and Charon has the same color throughout but Pluto changed. I don’t’ know how the camera system on HST could have given me the wrong colors on Pluto.”

Scientists believe that Pluto’s coloration is likely caused by hydrocarbon molecules called tholins that are formed when cosmic rays and solar ultraviolet light interact with methane in Pluto’s atmosphere and on its surface.

It's been known since the late 80s that Charon is significantly darker (has a lower albedo) than Pluto. On the the HST description page for the clearest view (at the time – 1994) of the Pluto and Charon system it was stated (emphasis mine):

Hubble's corrected optics show the two objects as clearly separate and sharp disks. This now allows astronomers to measure directly (to within about 1 percent) Pluto's diameter of 1440 miles (2320 kilometers) and Charon's diameter of 790 miles (1270 kilometers). The Hubble observations show that Charon is bluer than Pluto. This means that both worlds have different surface composition and structure. A bright highlight on Pluto suggests it has a smoothly reflecting surface layer.

Triton was observed by Voyager 2 in 1989 and shown to be reddish in colour. I believe even then that scientists hypothesized that the composition of Triton and Pluto were similar, but I haven't yet found any references describing the colour of Pluto as "reddish" before the 2010 Hubble Space Telescope observations.

Phil Plait just posted on his Bad Astronomy blog a painting of Pluto made in 1979 which is remarkably similar to recent imagery from New Horizons. The artist, Don Dixon, wrote the following when explaining his painting:

Every so often, an astronomical artist gets lucky. As the New Horizons spaceprobe closes on minor planet Pluto after its nine-year voyage, I'm astounded by how close I came to accurately depicting Pluto in 1979.

I'd like to claim prophetic powers, but the painting was guided by the reasonable assumption that Pluto likely has a periodically active atmosphere that distributes powdery exotic frosts into lowland areas. The reddish color of the higher features is caused by tholins – hydrocarbons common in the outer solar system. The partial circular arcs would be caused by flooding of craters by slushy exotic ices. Pluto is apparently more orange than I painted it, however; I assumed the exotic ices would push colors more into the whites and grays.

So there you have it, at least one space artist in 1979 reasonably guessed that Pluto's colour would be reddish.

8
Compounds causing the various colors on Pluto's surface?
8
Why does Pluto change color?

11
How long did New Horizons take to upload all of its data from the Jupiter encounter?
4
Why is part of this New Horizon's Charon high resolution image missing?
14
Why do the pictures returned from the New Horizons flyby of Pluto lack motion blur?
20
Why have there been no new New Horizons images in the last few weeks?
40
If there's nothing special about Pluto, why was it discovered so early?
1
What “high-tech fission-powered mission” almost “killed” New Horizons?
8
Compounds causing the various colors on Pluto's surface?