How can you predict an orbit, based on an initial position and an initial direction vector?

I've been developing a planetary simulator in Unity 3D (C#) and I need some help, however I feel this would be a better place for it. I'm starting my planet from a position vector. On initialisation I apply a direction vector, which puts it into orbit around a larger star. The orbits aren't circular, and I'd like for them to be elliptical.

I've read up on foci, the semi-major axis and semi-minor axis, on several laws by Newton and Kepler, I understand the apoapsis and periapsis, and yet I just can't figure out what I need to do. What I've done is leave a trail from the planets, and the orbits can be seen. (note: I know the layout of planets aren't correct!) 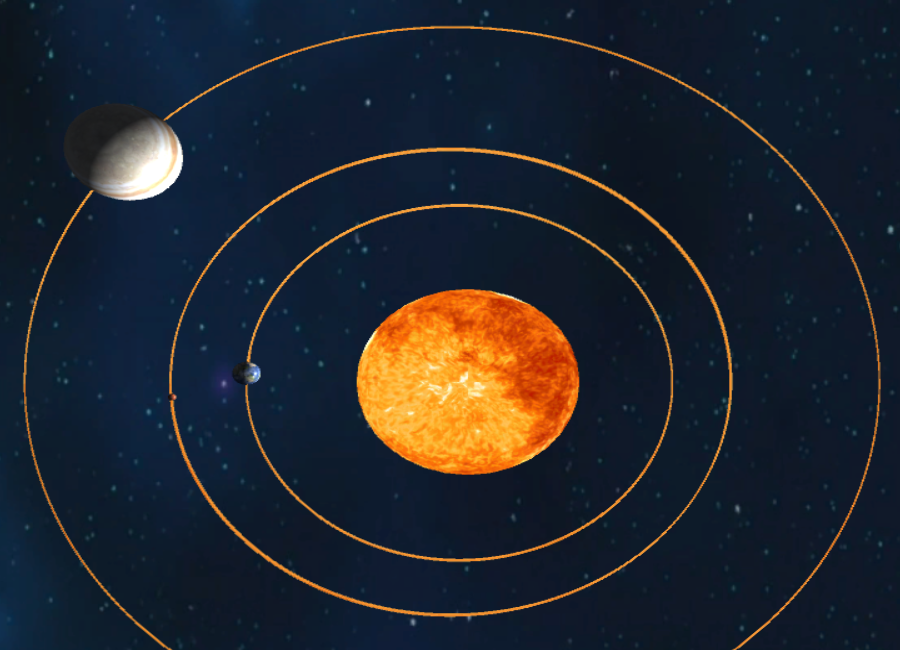 I'd really appreciate any help, thanks in advance!

I'm not going to give you the equations, but I'll get you started. You can google the equations. First compute the energy, a scalar. That will tell you if it even is in orbit (negative energy) or hyperbolic (positive energy). From the energy you can readily compute the semi-major axis. Then compute the angular momentum vector. The direction of that vector will tell you the plane of the trajectory and the direction in that plane (that vector is perpendicular to the plane of the trajectory). Then compute the eccentricity vector. That vector will lie in the plane, and will point to the periapsis or closest approach for a hyperbola. It's magnitude is, of course, the eccentricity of the orbit or hyperbola.

Then you'll have all you need to generate the orbital elements.

This JPL/NAIF SPICE toolkit routine OSCELT answers what appears to be a query about the two-body problem.

N.B. I assume your "direction vector" is actually a "velocity vector;" the STATE input to OSCELT is a six-element vector that is the the concatenation of the position and velocity vectors.

N.B. as noted above you do need a seventh number: MU, the GM value for the central body.

Technically you also need an eighth number, the time of the initial conditions, to have a starting point to calculate future (and past) ephemerides.

That link is for the FORTRAN version of the SPICE toolkit because that is what Google returned first. There are also C, IDL, Matlab, Java and even informal Python interfaces for SPICE; making a DLL of the C-version that can be called from C# should be possible.

I won't make this any longer than it has to be: poke around the SPICE pages; SPICE has a steep learning curve but is worth the effort. The documentation is about the best you will find anywhere, or contact me for more details.

Forgive my lack of a concrete answer, but it really depends on how accurate you need to be. I once wrote a simulator that used an n-body Newtonian approximation. It was nice, but not particularly well-implemented and could only support a couple dozen bodies before it slowed to a crawl.

KSP uses a simpler, more scaleable approach; a spaceship is only attracted to the body who's sphere of influence it inhabits, and planets and moons are on rails. This is a close enough approximation for a video game, and it doesn't grow out of control as you add more objects to the simulation. The tradeoff is that it means you're only ever attracted to one object at a time, so you don't see Lagrange points or other interesting gravitational effects.

Even a well-implemented Newtonian n-body model would be far more computationally expensive than KSP's system, and still wouldn't tell the whole story, as Newtonian physics doesn't take relativistic effects into account. (If you think relativistic effects don't matter to orbital mechanics, read up on the planet Vulcan: https://en.wikipedia.org/wiki/Vulcan_(hypothetical_planet))

It might be worth asking this question on Game Development stack exchange, as deciding how to best approximate an orbit has as much to do with the kind of game-play you want and the practical limitations of available computing hardware as it does with the physics of orbital mechanics.

Not the answer you're looking for? Browse other questions tagged orbital-mechanics orbit simulation or ask your own question.

1
Specifying a position and velocity of body in a Kepler simulation
4
Calculating the time since periapse of an orbital position
2
Calculating position of a body after a velocity change
3
How do you Model Hyperbolic Orbits?
5
Calculating velocity state vector with orbital elements in 2D
2
Given orbital parameters and position vector along that orbit, how can I determine the eccentric anomaly at that point?
6
How would off-apsis burn affect the angle and position of new apoapsis
4
How to calculate position and velocity from given orbital elements?
2
Are there any Earth orbits where the duration of eclipse increases with semi-major axis with all other parameters fixed?
0
How can I find the x, y position of apogee and perigee, if I only have the value of distance vector (position) and velocity vector?