How much RF transmit power does DSN need to send commands to Voyager?

I recently looked up how weak the Voyager signals are when they get to Earth from the 22 W transmitters (as of September 2013, it was roughly -245 dBm). But that got me wondering how many watts of power the Deep Space Network (DSN) needs to send signals the other way.

Any attempts at Google searching always resulted in how much Voyager throws our way....

Check the DSN Now page when it will show any of its stations communicating with Voyager 1 (code VGR1) or Voyager 2 (VGR2), select that dish and then expand the side column on the right to show all the data. It will show transmit power under up signal section. I'll update this answer as soon as I see that happen (see below for updates), but it would be in the 20 kW range and more, depending on transmitter used to communicate with it.

I.e. pretty much at the peak power available to it and the transmitter can handle. For example, farthest range probe currently communicated with is New Horizons (NHPC) at distance of 31.86 AU from the Earth (round-trip light time of 8 hours, 49 minutes and 52 seconds), via the Madrid station 63 (their largest dish), transmitting at 20.63 kW: 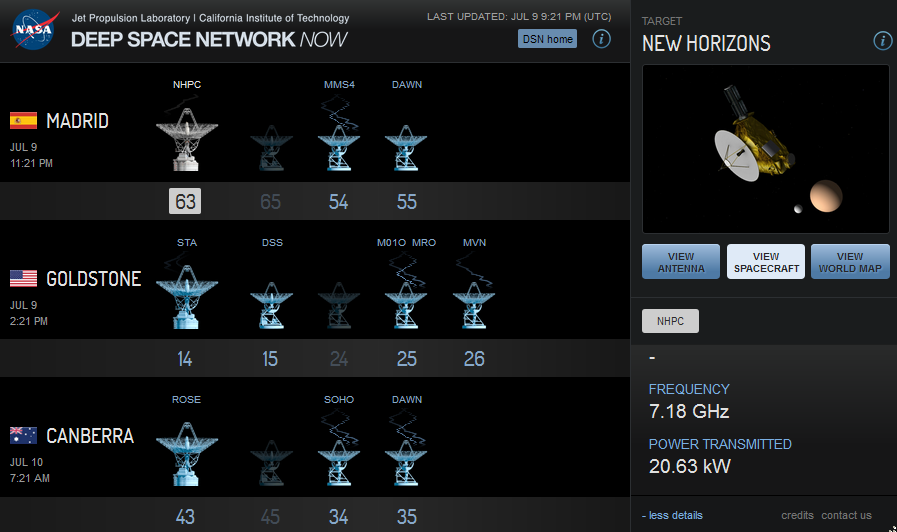 Still a temporary fix while I update with exactly what you asked for, but since I Googled for images a bit, I also found this screen grab showing Canberra station 34 communicating with Voyager 2. It's not as far as Voyager 1 (see e.g. Where are the Voyagers at NASA Voyager), and the screen grab seems to have been made on March 21, 2014, so over a year ago, but it was then still over three times the New Horizons' current distance away from the Earth: 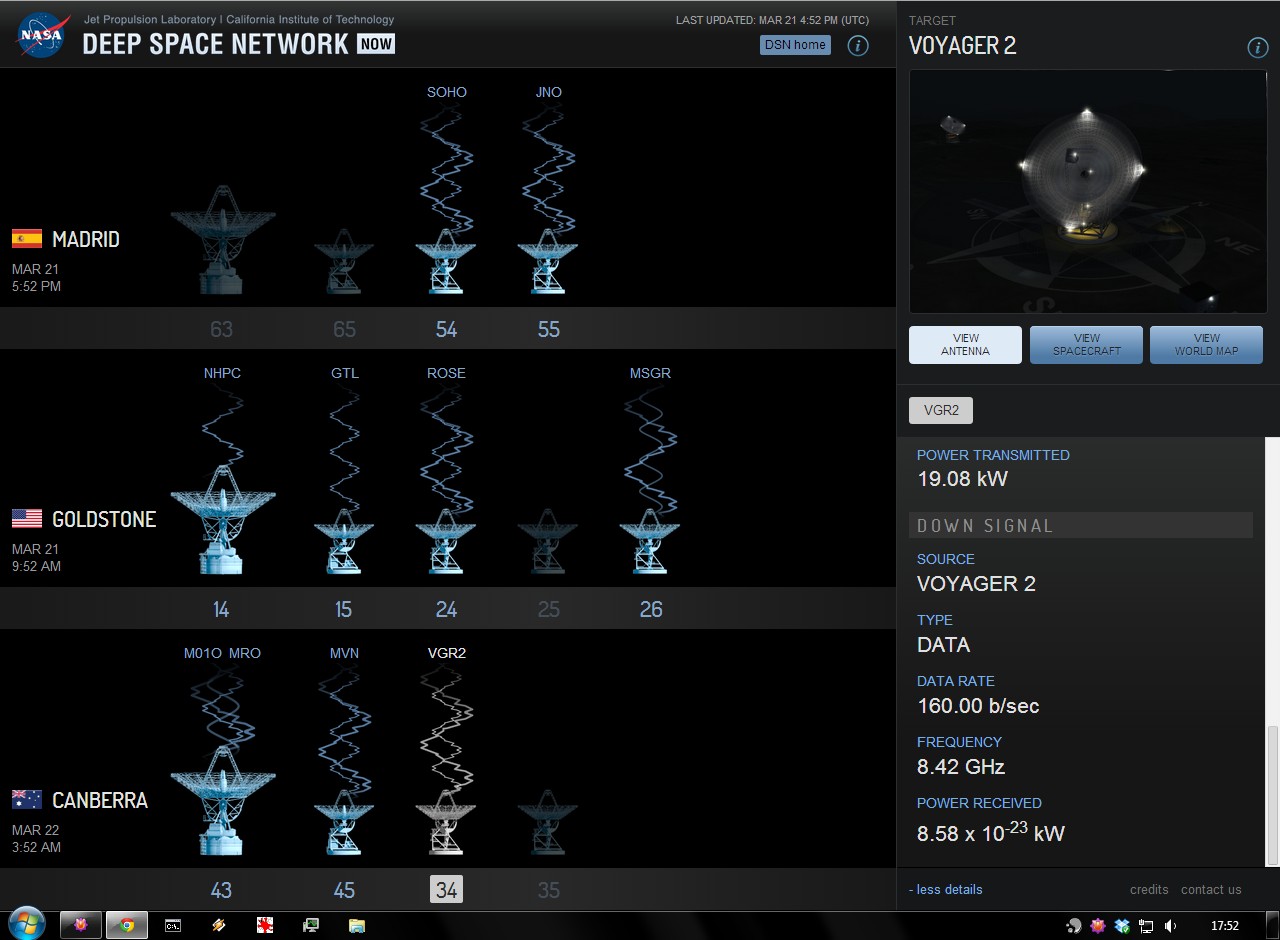 The station here transmits at the power of 19.08 kW. To compare, this same station is currently communicating with SOHO (Solar and Heliospheric Observatory) that is stationed at L1 Lagrange point between the Earth and the Sun (SEL1), about 1.5 million kilometers away from the Earth or ~ 1% the distance towards the Sun, and is transmitting towards SOHO with the power of 1.82 kW at frequency of 2.1 GHz.

Note that transmit power, unless you're already giving it all you can, does vary and depends on many parameters, including frequency, distance to target and angle to horizon, i.e. how thick of an atmosphere the transmitted signal has to go through, even wind, temperature and humidity in the lower atmosphere as those transmitters do get terribly hot when operating at near their peak power. And the lower the angle, the stronger the Earth's atmospheric effects, including diffraction, refraction and attenuation in general.

Thanks to OP's tracking of the Voyager's Space Flight Operations Schedule (PDF), we've now managed to capture Madrid station 63 (70 m dish, not the 30 m smaller ones) transmitting towards the Voyager 1 at the distance of over 131 AU away (Roundtrip Light Time from Earth of over 36 hours and 24 minutes). Temperature around Madrid, Spain was at the time of transmission over 31 °C at 11:36 p.m. local time (CEST), and nearly no wind (picking up from stall to only ~ 5 km/h), so it shouldn't be too surprising that its transmit power was under 20 kW (19.08 kW) to keep thermal noise down and the transciever below its peak TDP (Thermal Design Power): 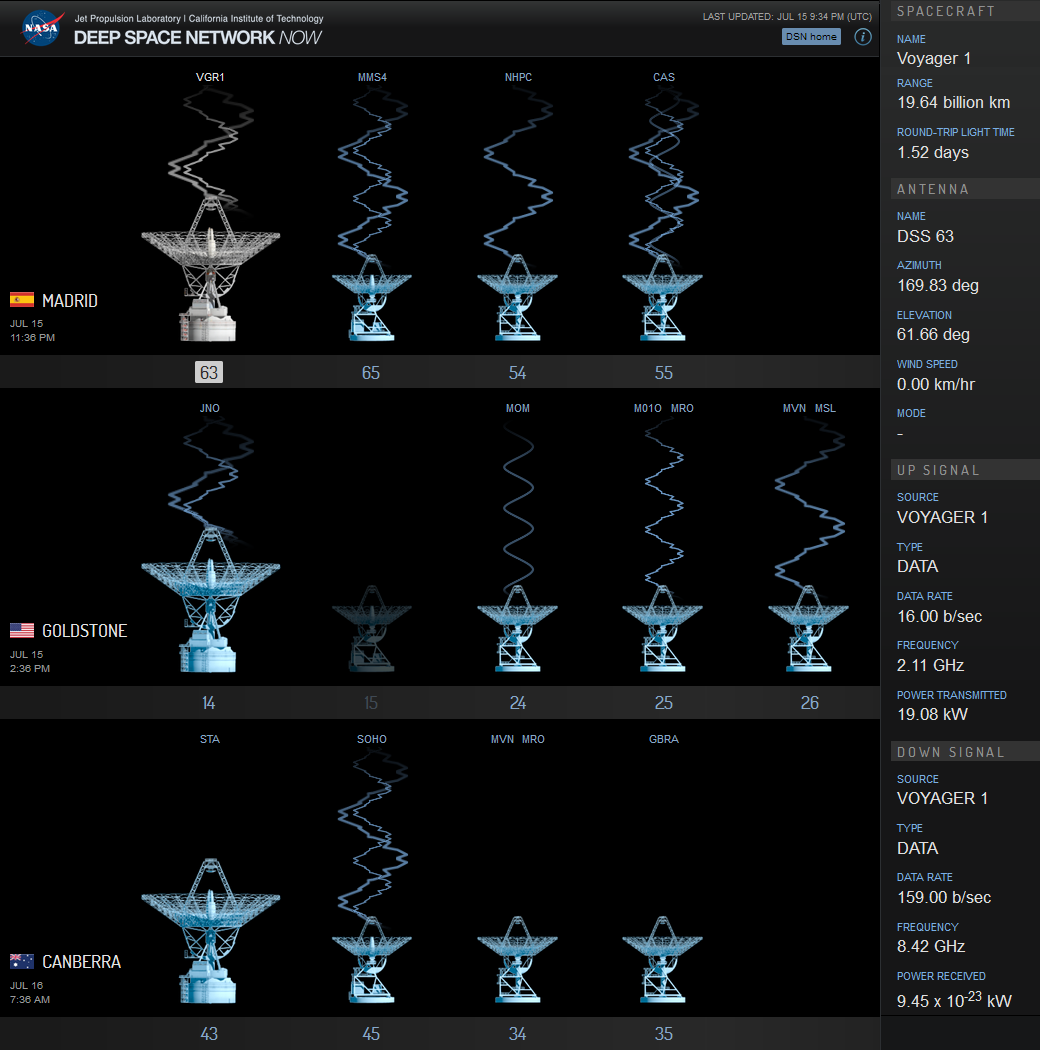 Transmit power was slowly increasing as the environmental temperature dropped somewhat and the wind picked up on speed a bit. Dish's elevation is also increasing as it tracks Voyager 1's position, which will also lower atmosphere's attenuation of the radio signal.

For another comparison, here's Goldstone's same size dish giving it all it can (21.44 kW on image, going up to 21.6 kW) during transmission to New Horizons, but the temperature there was at the time of capture 15 °C and a nice breeze reaching 27 km/h: 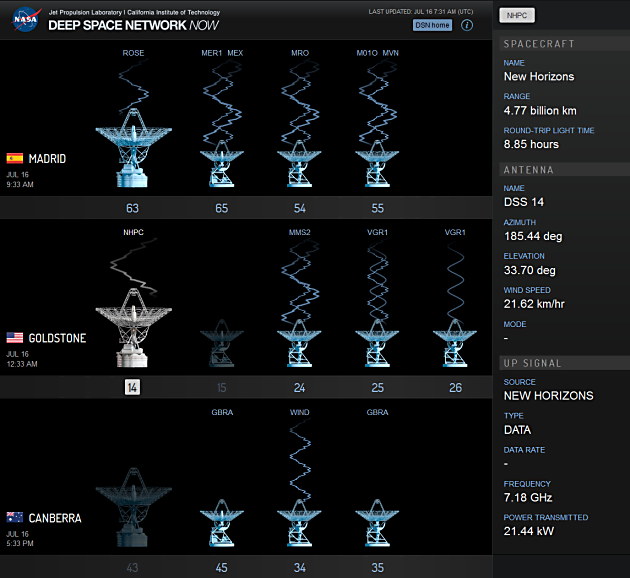 For additional screen grabs see links in the comments below.

I don't know how much they need, but they use a 20 kW S-band transmitter on a 70 m antenna at 16 bits per second for uplink.

This document contains some technical details:

In page 12 you will see that the S-Band transmitter has a 400 kW maximum output power. Others have 20 kW max.

13
What is the farthest a spacecraft has traveled away from earth?
18
Has DSS-43 ever been used in high power mode (>>20 kW) for an emergency situation?
4
Is a space probe communication relay possible?
2
What is a transmitting radio telescope's peak power consumption?
0
Why don't signals from rovers on Mars get lost on the long trip to Earth?

40
How does Voyager 1 send signals to Earth?
7
How much power does the Voyager radio dish draw?
25
How well can Voyager 1 separate Earth signals from Solar noise these days?
5
Why does DSN sometimes uses two dishes at the same time to receive Voyager-1?
13
How to calculate data rate of Voyager 1?
0
Are the Voyager spacecrafts' X-band TWTAs currently set to high or low transmit power? How often were they changed?
17
Does the Voyager team use a wrapper (Fortran(77?) to Python) to transmit current commands?
3
Does the Juno spacecraft have an "open signal, by design"?
4
Why are deep space "beacons" usually UHF, so low (in freq) that DSN can't hear them? And how unusual is it for a Mars lander to have an X-band beacon?