If the space shuttle computers all output contradictory commands, how is it chosen?

The space shuttle computers use triple-redundancy, and if one computer contradicted the other two, it would be ignored. I read that if all three gave contradictory output, one computer would be randomly chosen.

How would it be randomly chosen? Presumably random number generator, but I am curious.

It was not random.

Background: The shuttle data processing system was quad+ redundant, not triple. There were four Primary Avionics Software System (PASS) computers and a completely independent Backup Flight System (BFS) computer with totally different software. Each PASS computer controlled a "string" of avionics equipment (some really critical avionics such as main engine controllers were connected to all 4 strings and performed voting at the avionics box level). The BFS just listened to what was going on and did its own calculations in case of need.

Normally the PASS computers check each other and a bad one (defined as not agreeing) is voted out of the redundant set. Voting results were displayed on the CAM matrix on the cockpit panel in front of and above the commander's head. This matrix of lights displays graphically how each computer can cast fail votes against any or all of the others. 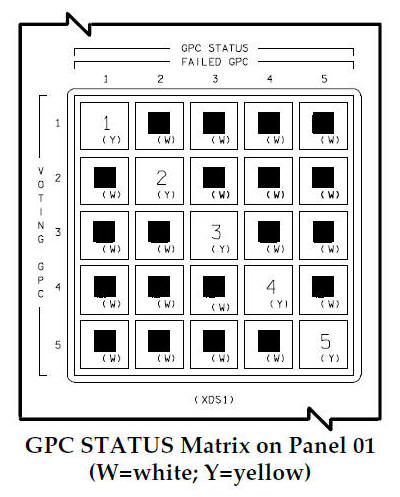 A failed computer's string can be assigned to a different computer if necessary. If all four of the PASS computers disagreed simultaneously, each computer would vote the others out resulting in a loss of flight control. (Each would still be controlling its own string based on what it thought was the right thing to do.) The crew would then engage the BFS by pressing a button on the rotational hand controller, and the BFS would take over all 4 strings all by itself.

There are other engage scenarios other than a total set breakup. For example, if 2 sets of 2 PASS computers agree with each other, but not the other 2, you would be in a "2+2 set split" and might have to engage the BFS if it was not quickly apparent which pair was wrong.

This is a brief summary. For more detailed information, refer to the Shuttle Crew Operations Manual pages 6.8-8, 6.9-1, and the DPS section 2.6.

Not the answer you're looking for? Browse other questions tagged nasa space-shuttle flight-computer or ask your own question.

4
What would cause the Shuttle's redundant computers to disagree?

13
Are all crew on board a spacecraft trained to handle flight-systems?
6
Why didn't the space shuttle use non-foam-shedding external tanks?
155
How did the Apollo computers evaluate transcendental functions like sine, arctangent, log?
5
Has magnetic core memory been used beyond the Moon?
9
How did Shuttle computers internally represent time?
12
Double redundancy for the Saturn V LVDC computer memory, how were disagreements resolved?
5
Why would the Shuttle-Transtage have been unusable for science missions?
6
What were the space shuttle’s emergency procedures for an SRB or ET separation failure?
6
Were all three Mobile Launch Platforms ever in use simultaneously?