How to find orbital elements of a binary system

I'm trying to find the rate of precession of a binary system consists of two similar mass stars A and B, so I need to find the value of the argument of periapsis $\omega$ first, with velocity and position of both stars are given.

I have done the calculation of the value of $\omega$ for Mercury and the method used can be seen here How to programmatically calculate orbital elements using position/velocity vectors?, or as the person in that post suggested, you can refer to the book Fundamentals of Astrodynamics and Applications, by Vallado, 2007.

However, for the Sun-Mercury case, Sun is much heavier and basically Mercury just rotates around and the Sun almost stays still, so it makes sense to just put the Sun(which is also the center of mass for this system) as the origin and the computation just follows, but for the A-B binary system which has similar mass and the center of mass is approximately half way between A and B, what should I put as the origin for my computation(and what is the mass of this origin that A and B rotate around)? 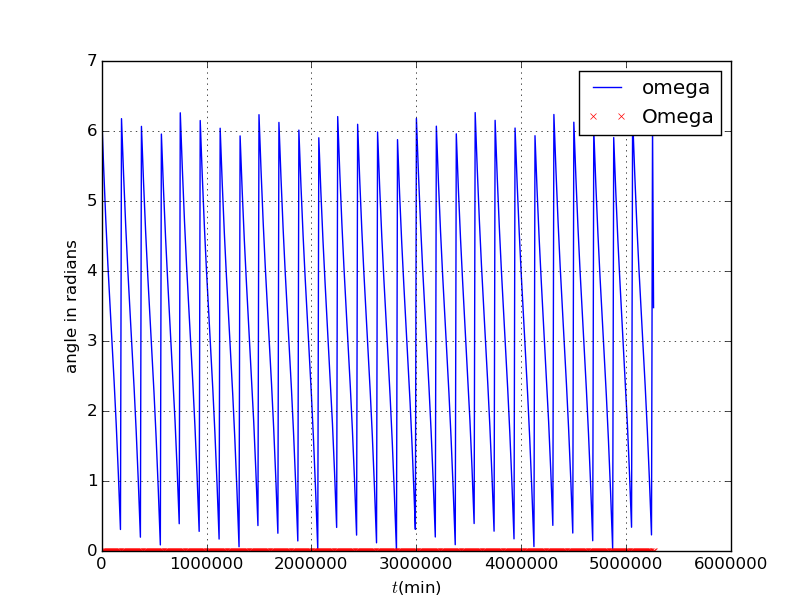 What you normally see as the orbit solution is in reality the vector difference between the positions of the two bodies. If one of the bodies is effectively not moving because it is so much larger than the other, then you simply have that solution as the motion of the smaller body.

where $\mu$ is the notation for the mass times Newton's gravitational constant $G$. Verify that the CG position and velocity are at the origin. Then determine the orbit for:

where $\vec{r}$ and $\vec{v}$ are the initial position and velocity of a massless object orbiting a central body with mass times $G$ of $\mu$.

where $\tau$ is the eccentric anomaly. The time equation is the same for both the zero mass and general two-body cases:

Solving the simultaneous equations, we get in general:

Now we can plot it:

Here is the same Newtonian solution for PSR J0737-3039, where this presentation provides the masses, period, and eccentricity:

The scale on the plot is km, and the period is 2.45 hours (the animated gif runs a little faster than that).

The eccentricity is small, 0.0878, and the masses are close to equal, where A is 1.338 and B is 1.249 solar masses. As a result, they are in close to a common circular orbit about their center of mass. (A is blue and B is orange.) The positions in km and time in seconds are:

Their speed in their orbits is an impressive 0.1% the speed of light.

When solving the Kepler problem is often solved for the case in which the central body is stationary, such that the body orbiting it has a negligible mass.

For a two body problem this solution can still be used. For this the center of mass of the two bodies, also called the barycenter, can be chosen as inertial reference frame, if there are not external forces acting on this system. In this reference frame the following will then always be true,

The final expression of equation $(2)$ looks similar to that of the case in which the central body is so massive that it can be assumed to be stationary. The only difference is that the constant/gravitational parameter is different. This different constant can be used as the effective gravitational parameter, $\mu_{eff}$, for a fictional body positioned at the barycenter for the body with index $i$,

Not the answer you're looking for? Browse other questions tagged astronomy astrodynamics or ask your own question.

3
Recent anomaly in star system detected by Kepler mission
2
Calculating hyperbolic orbit elements for interplanetary intercepts
3
Converting UT1/UTC to Julian Date
2
Determining orbital elements from r and v vectors - Fundamentals of Astrodynamics Example Problem
1
Apparent Centering Problem When Using the Perifocal System to Draw Orbital Ellipses
2
How would you convert keplerian orbital elments into cartesain vectors with quaternions?
1
Find the Orbital Inclination given all other Elements and a Position on the Ellipse