Why do KSC crawler-transporters use caterpillar treads instead of rail tracks? 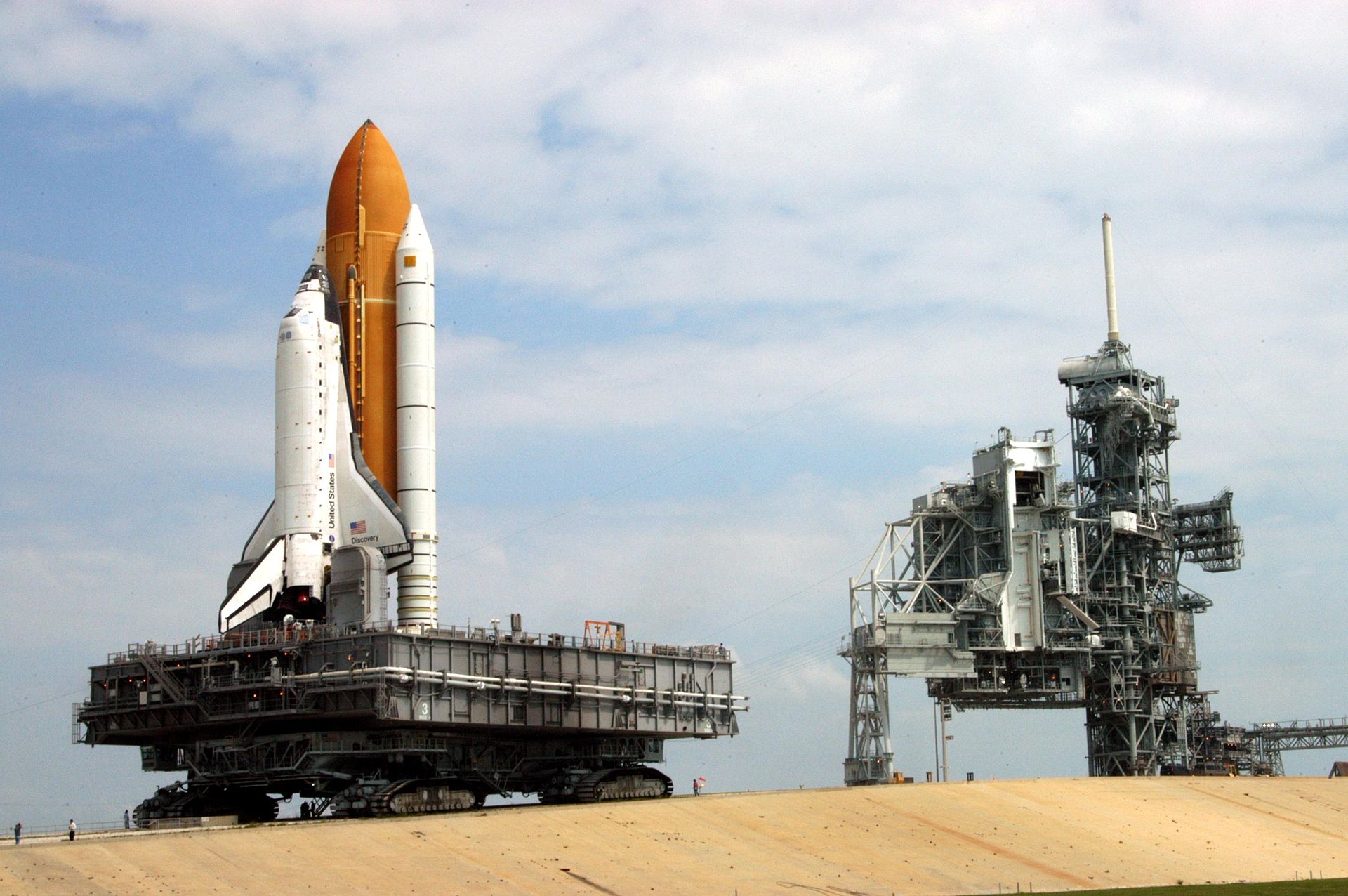 Here's a SpaceFlight Insider video clip about current work on modifying the crawlers for SLS:

The much lighter Soyuz is instead transported to the launchpad on tracks, a standard Russian gauge railway, it seems.

Rail tracks seem to me an obvious choice for moving super-heavy cargo a short distance between few fixed points. Caterpillar treads are more useful to traverse rough terrain, and is mostly used on construction and military vehicles. Why do the crawler-transporters use caterpillar treads instead of running on rail tracks?

Added: It seems as if Buran and the N1 launcher also had a crawler transporter, the same one, but towed by locomotives on rail tracks (or do I misunderstand that?) Hmm, the book linked to says it was towed by four 100 horsepower locomotive. Hardly.

Weight distribution would be be the main reason.

The Shuttle stack (or Saturn V stack) empty, weighed an immense amount. Shuttle more so, since the SRB's were full during movement. (Can't fuel a solid rocket on the pad). The SRB's weighed 1.3 million pounds each ready for flight. That is really an immense amount, over a small area.

The tracks of the crawlers are huge, which better distributes the mass over a larger area of the ground.

There was talk that for SLS with its 5 segment SRB's the ramp up to the pad will have to be rebuilt/reinforced to handle the extra weight.

A rail line can distribute the weight over more wheels, but they are very narrow. While a mile long train might weigh as much as the Shuttle stack, remember it is distributed over a mile of track. The crawler is fairly compact in foot print.

A Soyuz or Proton which are taken to the launch pad by rail are much much smaller in comparison.

The Kennedy Space Center Story, written by NASA in June 1970, NTRS document 19710024295, p. 29 describes the options that were considered, and the reason for the final choice:

The scheme by which to transport launchers and assembled Saturn V vehicles was carefully explored by NASA engineers. A barge canal system was investigated. Models were tested in the Navy's David Taylor Model Basin on the Potomac near Washington, D.C. They revealed that hydrodynamic problems caused by a barge large enough to carry the rocket in upright position would be extremely difficult or costly to solve. Also, an elaborate launch pad would be needed.

Other potential solutions proved impractical, or in the case of a rail­ road, too costly for moving the tremendous loads involved. Pneumatic­ tired transporters, ground effects machines, and other ideas were discarded. The final choice was a track-mounted crawler so big that after partial assembly at the plant of Marion Power Shovel Company, Marion, Ohio, it was taken apart in moveable sections, shipped to the launch center and there assembled. This solution was derived from the strip mining industry and involved the use of hydraulic power for jacking, leveling and steering.

(A "ground effects machine" is a hovercraft. That would have been awesome.)

Another thing to consider is that (most of) Kennedy Space Center launch pads are significantly elevated above average ground level, whereas Baikonur Cosmodrome is flat, instead having large trenches dug underneath the pad.
Compare KSC: 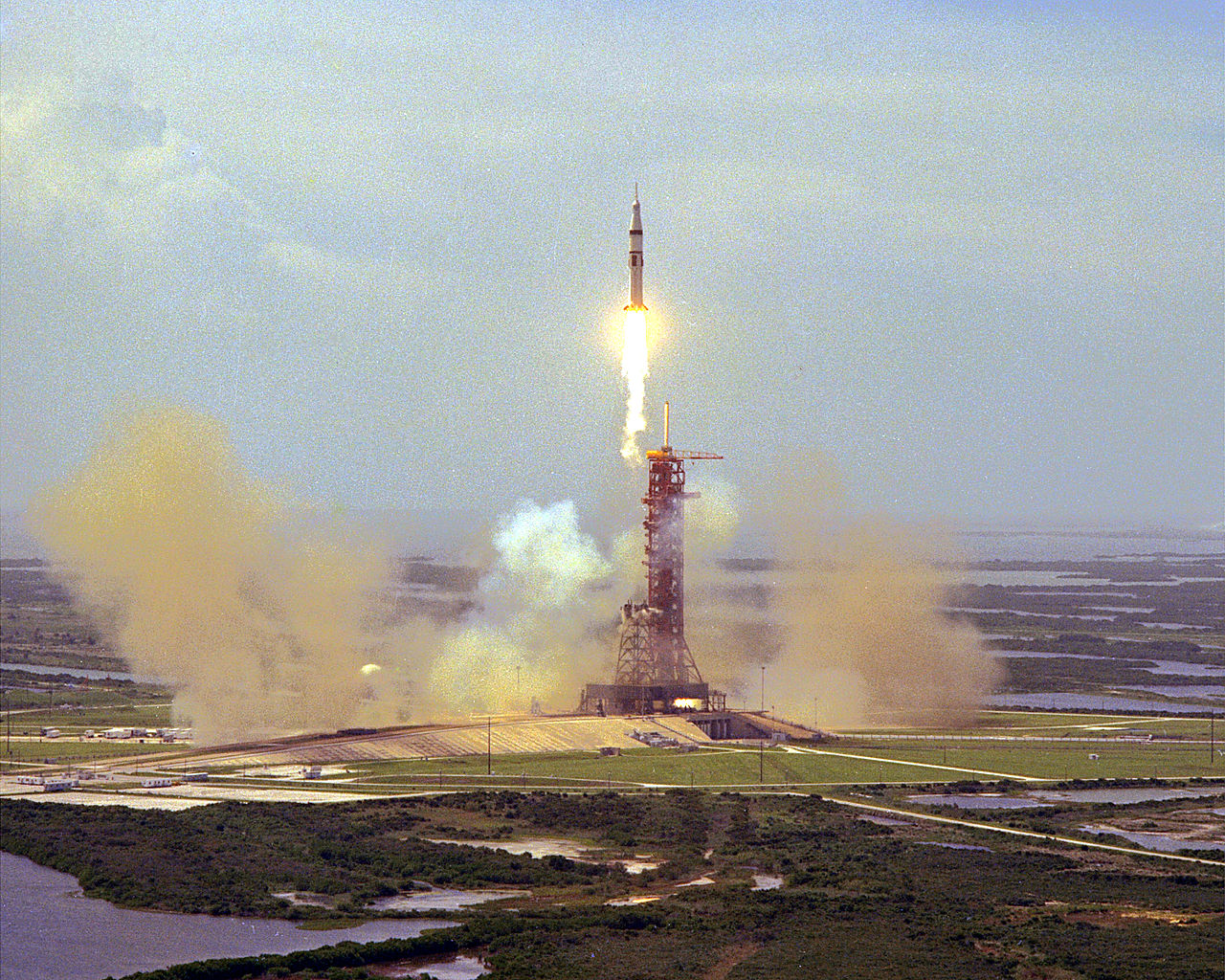 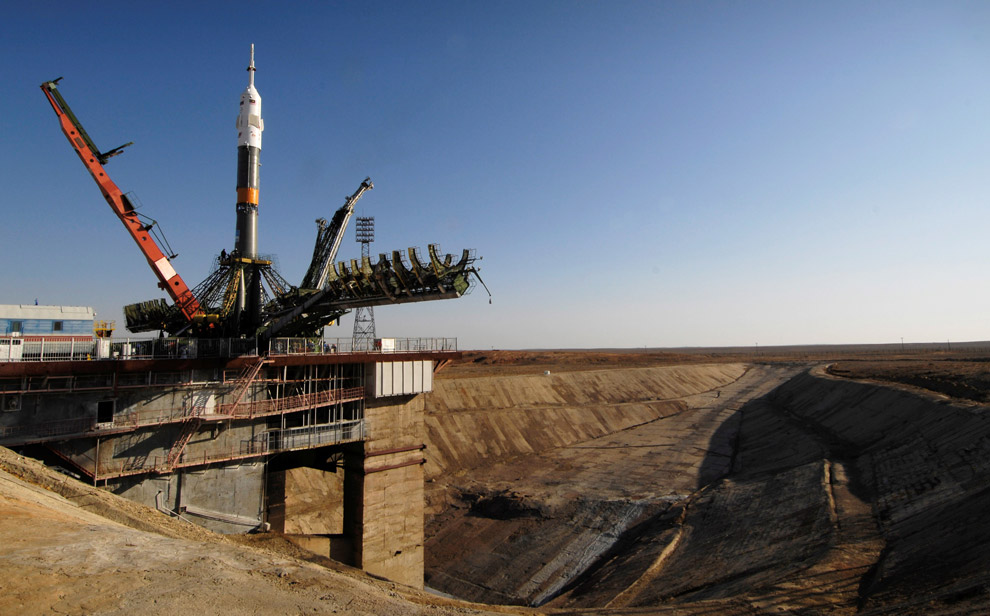 Where the Russians ride over smooth, level terrain, the Americans have to overcome this elevation as the final part of the journey to the launchpad. Pushing a train uphill is difficult (citation needed), as you risk losing grip and sliding backwards. However, friction between the caterpillar tread and the ground is immense - so it's easy to go uphill or stop halfway there. This could have been one of the secondary reasons (alongside those already mentioned in other answers) of choosing them instead.

Not the answer you're looking for? Browse other questions tagged launch-site engineering launchpad operations kennedy-space-center or ask your own question.

2
Why use an air conditioning blanket instead of supplying air into the fairing?