How much of Akatsuki's original mission will be possible?

In December of 2010, Akatsuki was meant to enter orbit around Venus, but the insertion failed. They now have a new plan to put Akatsuki into orbit in December 2015, but the orbit will be different. Originally the elliptical orbit was meant to range from 300 km to 80,000 km. Akatsuki's purpose in this mission is to image and investigate the clouds and surface of Venus for the purpose of studying the planet's meteorology, and attempt to confirm the existence of lightning and volcanoes.

With the new plan, the numbers that I can find for its orbit will be from 5,000 km to 300,000 km. With such a different orbit, how much of the planned science for the original mission will be possible?

Without its main thruster, orbit maneuver engine (OME), that's been completely dismissed as possible to restart (they did try but only got a small fraction of thrust out of it, about 10%) and have even dumped oxidizer (Mixed Oxides of Nitrogen, or MON) to save on spacecraft's mass as reaction control system (RCS) thrusters don't need it, extremely low (300 km) periapsis injection into elliptical Venusian orbit isn't an option any more.

RCS thrusters, having much smaller thrust and also smaller specific impulse, will require longer burn time at periapsis to sufficiently trim down apoapsis (with the help of Oberth effect) so the orbiter stays in Venusian orbit and isn't ejected once again into heliocentric orbit, like it happened on the first try. And aerobraking isn't an option for this craft, as it doesn't pack a heat shield. So the only way to do that with RCS thrusters is to increase periapsis and with it extend the time at it. Wikipedia article mentions that periapsis will increase from 300 km to 5,000 km to facilitate that, but that is marked with citation needed, and I wasn't able to confirm that number. Still, it does make sense, so I'll just assume it's about right. Later lowering periapsis from initial insertion altitude is likely also not on the table, because that requires highly inefficient in delta-v apoapsis burns, and the craft wouldn't have enough of hydrazine to complete more taxing burns it was never designed for.

Takeshi Imamura mentions in his Toward Venus orbit insertion of Akatsuki (PDF) presentation to the NASA's VEXAG (Venus Exploration Analysis Group) in April 9, 2015 that Akatsuki will try to insert into a highly elliptical 8-16 days orbit instead of the originally planned 30 hours one, but information there doesn't say much about periapsis or apoapsis, only its semi-major axis which would then be somewhere between 150,000 and 250,000 km instead of 40,000 km.

So, assuming a periapsis of 5,000 km instead of 300 km above Venus, all of its instruments will lose quite a lot of their resolving power, and that likely means that its Longwave Infrared Camera (LIR) thermal emissions camera measuring cloud-top temperature differential won't be able to detect finer details in cloud formations. It has spatial resolution of 0.05° which corresponds to ~70 km on the Venus surface when viewed from the apoapsis and ~26 km from the distance of 5 Rv (Rv is radius of Venus or 6,051.8 ±1.0 km). Likewise, its high-speed Lightning and Airglow Camera (LAC) that was supposed to detect lightnings and atmospheric glow on the night side of Venus won't be able to detect smaller discharges, if any at all. It's still reasonable to assume that it should be able to detect their afterglow together with LIR and the brightest flashes in ionization of their surroundings. Its sensitivity is 1/100 of standard lightning on the Earth when viewed from 1000 km altitude.

Other three of its five imagers, on top of already mentioned also 1-μm (IR1) and 2-μm (IR2) cameras, and Ultraviolet Imager (UVI), should still provide fairly good science return. Albeit at smaller resolution, and they might miss smaller volcanic events, they will also benefit from slower periapsis passes relative to Venusian surface and the direction of its super-rotating atmosphere. Of course, all of this is but a theory so far, since nothing really guarantees that its second injection will work out OK. And it should be noted that all of the Akatsuki's science instruments have been switched off for more than three years due to thermal constraints and will only be turned on right before VOI (Venus Orbit Injection). Its batteries would also have degraded capacity by now and it's questionable if they will be able to support power requirements of all of the instruments on the Venusian night side. Fingers crossed tho. 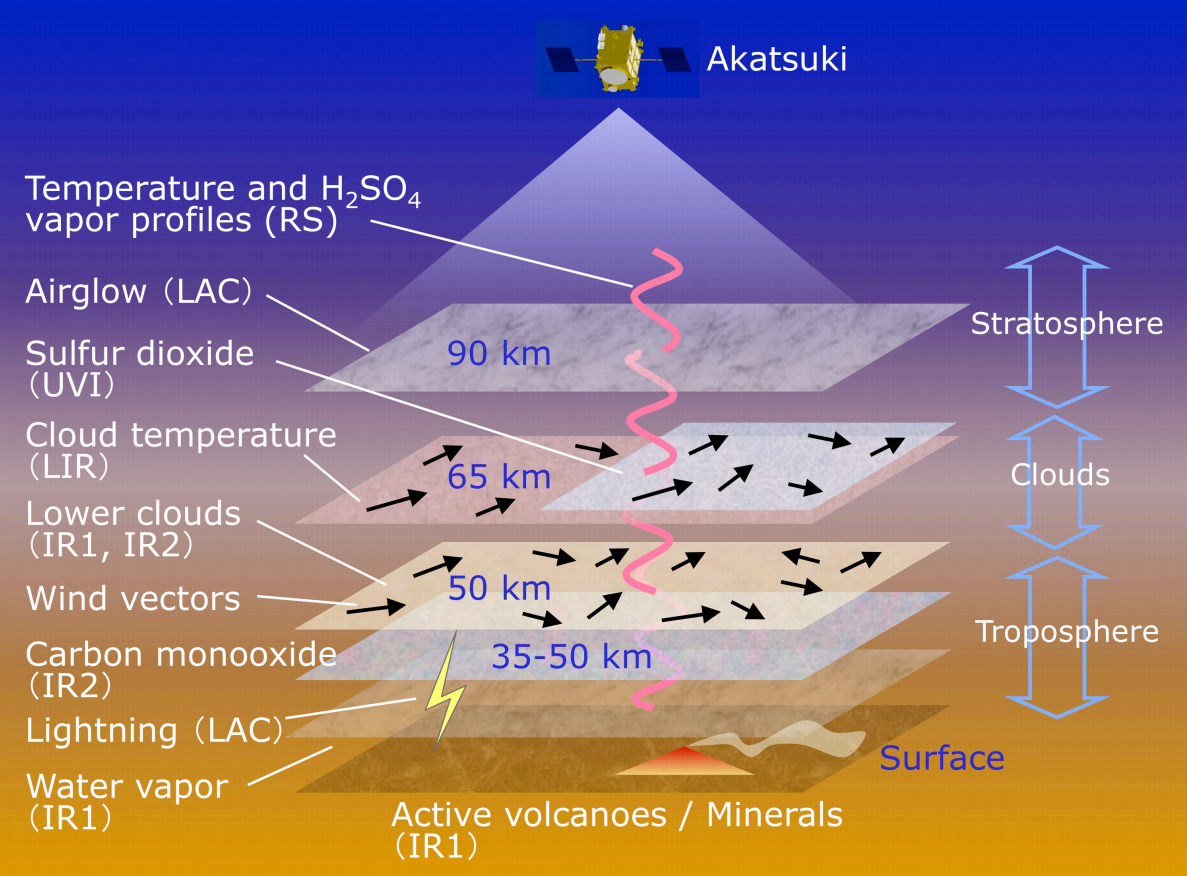 Refer to PLANET-C: Venus Climate Orbiter mission of Japan (PDF), Takeshi Imamura et al., for description of spacecraft's instruments and their design and limitations, and Toward Venus orbit insertion of Akatsuki (PDF), Takeshi Imamura for VEXAG, for some fairly recent (April 9, 2015) details on orbiter's state after failed Venus Orbit Insertion in 2010, what Venus aeronomy science it has done so far, and plans for contingency VOI five years later.

Not the answer you're looking for? Browse other questions tagged artificial-satellite orbit venus science akatsuki or ask your own question.

8
How will Akatsuki get into orbit around Venus?

8
How much more power does a PV cell generate in Venerean orbit?
4
How much do eccentricities of different satellites in GSO vary?
17
How accurately (maximum possible accuracy) can future satellite positions be predicted?
11
How much sulphuric acid is on Venus?
8
How will Akatsuki get into orbit around Venus?
10
How much “wobble” does a typical geostationary satellite experience?
12
How much will SpaceX's constellation of Internet satellites cost?
6
How did salt prevent Akatsuki's insertion burn?
3
How much payload capacity is available for a Rocketlab Photon interplanetary mission to Venus?