A team of Boeing employees (Budica/Herzberg/Chandler 1) have patented an inertial confinement fusion engine (the basic principle going back to C.D.Orth's VISTA from 1999 and Rod Hyde's 1983 ICF proposal, but with a few quirks of their own): 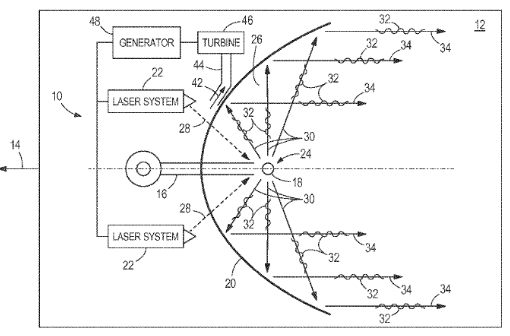 It's not your ordinary Orion, since it:

My question is about the nuclear reactor part. How does one guarantee the reactor's stability if there are, say, power excursions - a pellet is too large, and corresponding neutron flux higher than expected? What are the negative feedback mechanisms that keep the reactor under control?

Depleted uranium cannot sustain fission on its own, so there is no runaway possible and no negative feedback is needed to control it. As soon as the neutrons from the fusion stop, the fission stops.

However once you start this thing, you will have highly radioactive fission products mixed in with your depleted uranium, so it is probably not something you want to operate until you have no chance of crashing back on Earth. E.g. you wouldn't start it up until you were in a highish low-Earth-orbit, around 1000 km. I'm not seeing this used on a launch vehicle, at least not if under the auspices of a democratic government.

Not the answer you're looking for? Browse other questions tagged laser nuclear-pulse-propulsion or ask your own question.