What cooling improvements did the Venera missions make?

I've been reading about Russia's (former Soviet Union) Venera missions, and one thing about them that has impressed me is the incremental improvements the landers made in their lifespans before succumbing to Venus' heat. The survival of their landers on the surface are as follows:

(Only went backwards once. I guess even scientists and engineers aren't perfect)

The Wikipedia articles for each of the missions are not very descriptive in the improvements of the cooling methods. In fact, a couple of them say exactly the same thing:

A system of circulating fluid was used to distribute the heat load. This system, plus pre-cooling prior to entry, permitted operation of the lander for [xx] minutes after landing.

Others don't mention cooling at all, and I can't really find any other information about the cooling systems.

The ones that do mention cooling seem to have similar methods. However, seeing increased lifespans with every lander (except the last), they must have made cooling improvements in some ways. Were different methods used in later missions (maybe a different type of cooling fluid)? Was it just blind luck that the landers survived longer every mission, or was it something different?

Related Question: What material properties would be necessary to shield a lander from the environment of the Venusian surface? - talking about the materials used for longevity against the heat and sulfuric acid, but not the cooling systems used in the Venera missions.

According to Wikipedia launch windows to Venus occur every 19 months. In some cases multiple successful probes were launched with the same design at the same time so I'll group those together (the Soviets launched two similar/identical missions per launch window they actually used to ensure mission success through redundancy). I'll label each mission with the launch year.

Un-annotated statements are from the link in the title of the section, references used for more than one probe will be at the end. My primary source is this site by Don Mitchell, individual pages are referenced below and his site includes a bibliography page. I'm extracting mainly the comments related to cooling and mission duration, there's a lot more information available there.

The primary focus for this probe was on surviving to the surface (withstand higher pressure, temperature, and the shock of landing)4- previous attempts had been crushed by the atmospheric pressure before getting there. To this end the pressure vessel was designed to withstand 180 atmospheres or pressure (massively overbuilt, had little room for scientific payload) and the parachute was reefed to descend quickly (it was supposed to fully open when the heat melted the reefing cord).

The only mention I can find of cooling is that the spacecraft bus cooled the descent capsule to -8° C before separation. I'm taking the lack of room for payload and fast descent profile to mean that they were trying to hit the ground before the sealed pressure vessel got too hot.

The capsule antenna was extended, and signals return commenced. Six minutes later the parachute ripped, and then collapsed, leaving the probe to fall towards the surface for another 29 minutes. The probe impacted on the Venus surface at 05:34:10 UT at about 17 meters/sec and the signals weakened, reached full strength for about one second, and then seemingly ceased. Later analysis of the recorded radio signals revealed that the probe had survived the impact and continued transmitting a weak signal for another 23 minutes.

Entertainingly, "The fact that the capsule survived impact at 17 m/sec was used to estimate the bearing strength of the soil."

Considering the conditions of landing I'm not sure how much can be read into the survival time in terms of resistance to the environment/temperature. Having survived to the surface with the ability to report temperature the design of later probes could be refined instead of being as overbuilt.

This time they cooled the descent capsule to -15° C and only designed for 105 atmospheres of pressure2.

Plumbing the Atmosphere of Venus (footnote 1 and the title link for this section) has an excellent diagram for this probe: 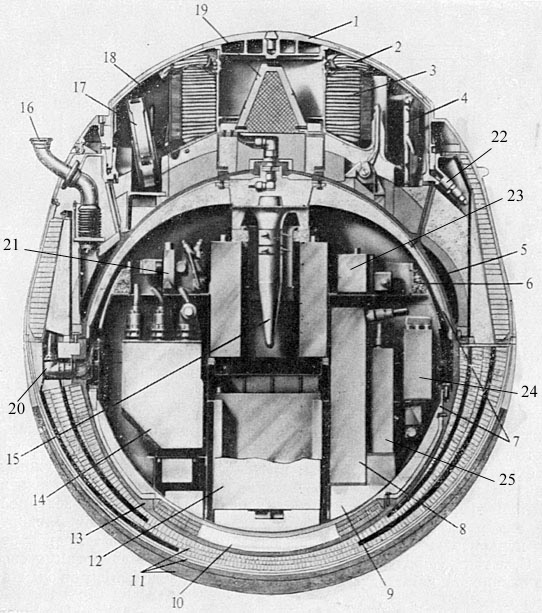 (other numbers listed at the source linked in footnotes)

One new idea, for additional thermal protection, was the addition of phase-change material. Lithium nitrate trihydrate melts at 30° C, absorbing a large amount of heat, due to its high latent heat of fusion. Besides large "heat accumulators" of this material in the capsule, sensors that extended outside were jacketed with it. Insulation of a honeycomb composite material was developed, to insulate under high pressures and temperatures.

This was a complete redesign based on lessons learned from Venera 7 and 8.

The core of the descent vehicle was a spherical titanium hull about 80 cm in diameter. It was formed in several sections, bolted and sealed with gold-wire gaskets. That was covered in a 12 cm layer of thermal insulation (a composite honeycomb material) and a thin outer skin of titanium. The pressure hull was lined inside with insulation, possibly layers of fiberglass and metal foil. A large thermal accumulator of lithium nitrate trihydrate and a circulating fan distributed and absorbed excess heat.

It was cooled to -10° C before separating from the bus, and the interior temperature rose to 60° C after an hour on the surface. Mission lifetime was limited by loss of radio contact, not thermal failure.

The orbiter was in an eccentric orbit that would remain over the landing site for a long period of time, but for both Venera-9 and Venera-10 the data stream ended when the range to the orbiter was too great for the probe transmitter to reach.

The only reference on temperature management is:

Apparently the system worked as well as the Venera 9 and 10 because transmission was lost due to radio range again:

For these probes they were in part building the science payload to withstand the conditions without having to be inside the cooled pressure hull:

By this time, Soviet engineers had developed new heat-resistant materials and electronics that were comfortable in this working environment. Exotic lubricants, based on molybdenum disulphide and microscopic metal flakes, were designed to function at high pressures and temperatures up to 1000° C.

Similar to Venera 11 and 12 the spacecraft bus flew by Venus instead of entering orbit. I can't find anything that explicitly states why the missions ended (though Wikipedia claims that design life was only 32 minutes) but I'm guessing it was once again loss of signal due to range, not equipment failure.

After the first attempts the probes were built to withstand the temperature and pressure conditions of Venus for as long as the orbital parameters of the spacecraft bus kept it within range of the descent module on the surface. Especially considering that several of the probes were identical pairs the trend of increasing mission duration seems to be either coincidence or intentional changes to how the decent and bus orbit/flyby were aligned, not related to increasing thermal tolerance.

Not the answer you're looking for? Browse other questions tagged venus lander thermal-control heat venera or ask your own question.

18
Venus vs Mars for colonization
18
Are fans ever used in un-crewed spacecraft?
25
What would the Venus landers look like today?
13
What material properties would be necessary to shield a lander from the environment of the Venusian surface?
6
The practicalities of a rock sampling mission to Venus

18
Why did the Venera missions land so close together?
6
Dissipating large amounts of energy fast, in space
6
How was the radius of Venus measured so accurately (± 3 km) via radar in the mid 1960's, before Venera 4 and Mariner 5?
2
How do Stirling radioisotope generators maintain a temperature differential in a vacuum?
9
Are Zond 2 and Venera 4 basically the same spacecraft design? What were the differences?
32
What are the teeth on the edge of Venera 13 and 14?
14
Parachute material used for the Venera probes to survive 500 °C
5
How did the Venera Probes manage to safely descend to the surface of Venus?
6
Premature detonation of explosive bolts when landing on hot Venus?
4
Thermal batteries rather than battery-powered heaters for small craft on Mars; how much mass would it add, how much would it replace?