When could we see Pluto's Southern hemisphere?

New Horizons just passed by Pluto, but was unable to see the southern hemisphere, as a result of it being in perpetual eclipse. When will the southern half be lit, so that the rest of the planet could be seen?

The seasons of Pluto correspond to the closest approach to the Sun. The best time to visit Pluto would have been in 1990, the time of the closest approach to the Sun, which also would have allowed both hemispheres to receive equal light. While 25 years is only a fraction of Pluto's orbit, due to Pluto's large tilt, it has considerable parts in darkness even at this time. A nice chart of this can be seen on Planetary.org, which Emily has graciously allowed for posting elsewhere. 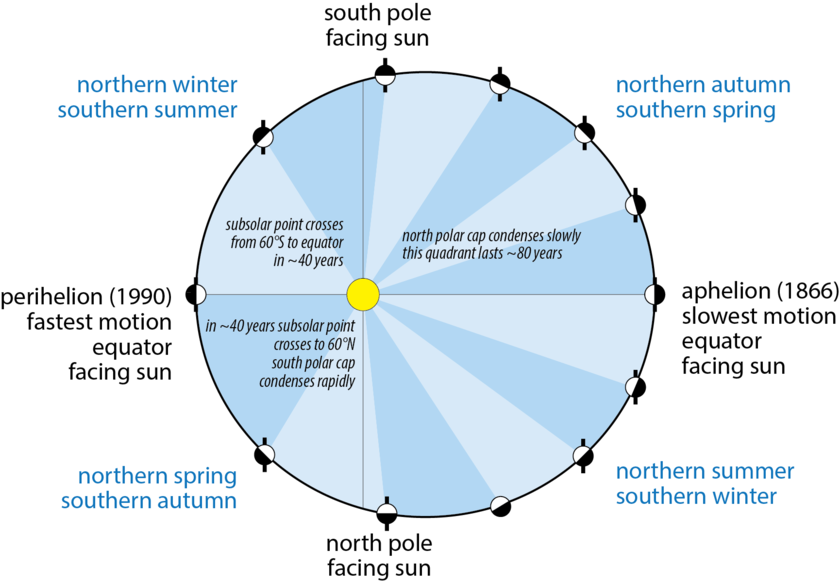 As Deer Hunter mentioned, part of the southern hemisphere can be seen using reflected light from Charon, however, there is a portion of the Southern hemisphere in complete darkness for some time to come. The next opportunity won't be until Pluto next reaches aphelion, in 2124.

21
What's after Pluto for New Horizons?
15
New Horizons - How much time will we get to image the Pluto system?
25
Why doesn't the New Horizons probe fly any nearer than 10,000 km from Pluto?
10
What is the relationship between New Horizons launch and Pluto's loss of Planet status?
5
New Horizon's disabling safe mode near flyby (in 2007)
1
What “high-tech fission-powered mission” almost “killed” New Horizons?
8
Compounds causing the various colors on Pluto's surface?