Why didn't New Horizon use Mars as a gravity assist like it did Jupiter?

Part of New Horizon's path took it near Mars. Why didn't they use Mars for a gravity speed boost like they did Jupiter? I'm guessing it had to do with the relatively small size of Mars being unable to pull New Horizon due to the probe's speed.

It really wasn't that close, and going out of it's way would have been more trouble than it was worth. See this map from APL of the planets position when New Horizons crossed Mars's orbit. 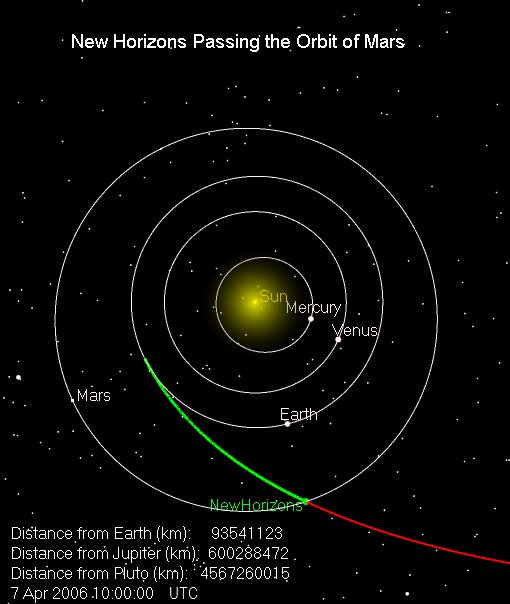 Looking at the list of objects that New Horizons crossed it's orbit, the only one that even was close enough to consider was the Moon, and as that's never been done, I don't think it was really considered. My educated guess shows it could have added a few hundred m/s to the calculation, but it would have significantly limited the launch window, making it unlikely to be of much use.

Not the answer you're looking for? Browse other questions tagged mars new-horizons gravity-assist pluto jupiter or ask your own question.

3
Why is this “grainy footage” of a Martian (sky) from Curiosity so grainy? Cloud snaps by Opportunity look great!
2
Would it be possible to go beyond Jupiter without making any slingshot?
7
Is a graviational slingshot around Mercury a feasible solution for space probes?
1
Why is the highest speed that Voyager 2 achieved from the Jupiter gravity assist not at perijove?
4
Was the gravity assist at Jupiter the most dangerous part of the New Horizons mission?
1
Gravity assist from Jupiter if leaving Callisto?