Has any probe ever been launched into a highly elliptical orbit with say 20-30 year to orbit the sun?

Why has no one launched a probe that goes into a highly elliptical orbit around the sun ( on a path that goes beyond Pluto without escaping the sun's gravitational field) and capture images as it tours the deep space and deliver all the data when it's on it's approach back to Sun?

The closest to this design was the Ulysses probe, which ended up in a heliocentric orbit with a semi-major axis of 3.37 AU and an eccentricity of 0.603, and an orbital period of 6.2 years. (Orbital elements available here.) It was launched in 1990, and operated until about 2008.

However, the point of this probe wasn't to take pictures from deep space, but rather to get pictures of the Sun—specifically, the sun's poles. To get a spacecraft into a polar orbit, you would have to get rid of a large amount of momentum in the plane of the Solar System and add a bunch of momentum perpendicular to the plane; and as we all know, the best way to get a big delta-v is to head out to Jupiter. So the craft went out to Jupiter, and used its gravity to slingshot itself out of the plane of the Solar System. (If you do the math, the perihelion of Ulysses's orbit is at about 5.4 AU, which you might recognize as the orbital radius of Jupiter.)

Ulysses did some science when it swung by Jupiter the first time, but most of its subsequent data collection was confined to the times (over three orbits) when it was over the Sun's poles. When it got back to Jupiter after its first orbit, of course, Jupiter had gone on around its orbit, and there wasn't much there to see. (It did apparently do some "distant observations" of Jupiter at the time, but it wasn't a close flyby—about 0.8 AU away.)

A 30-year mission is difficult to engineer for. The Voyagers are still alive (more or less) after 30 years, but that's as much luck as skill.

The probe would also have to be large:

Voyager is just about the largest object we can send to the Kuiper Belt at the moment, this mission would need to be many times heavier.

So we're talking about a massively expensive mission, with a mission objective that's really vague and has a low probability of success.

Given the realities of planetary exploration (only a few missions per year, tight budget constraints), only the missions that are most likely to succeed will be funded.

There is not a spacecraft that does exactly as you suggest. The closest was probably Cassini, which was in an elliptical orbit to achieve orbit around Saturn, or Ulysses, which was used to orbit the Sun's poles, as @MichaelSeifert explained. Why not? There are quite a few reasons. Let's look at a few.

Bottom line, it's faster, cheaper, and better to just let the spacecraft keep going it's way.

I'm guessing it's because 'delivering the data when it returns' isn't as good as it sounds.

We're receiving data just fine from New Horizons (albeit slowly), and I think this will always outweigh the benefits of a spacecraft physically coming closer. Light travels very, very fast, and having the point of transmission closer doesn't make a huge difference to the data downlink.

The main point, however, is that the spacecraft will eventually become useless in it's heliocentric orbit, because Pluto would have moved on when the probe returns to aphelion on it's second orbit. A flyby probe like New Horizons can go on and collect data from other Kuiper Belt Objects, and later outside the heliosphere. 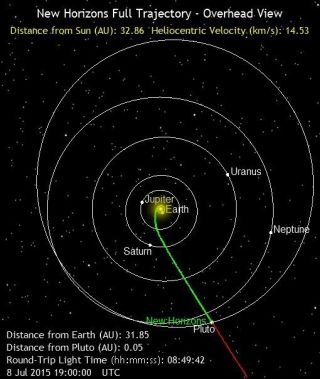 The trajectory of New Horizons, on a path to escape the Solar System after flying past Pluto, and hopefully exploring new worlds beyond. (Courtesy NASA)

Not the answer you're looking for? Browse other questions tagged probe deep-space or ask your own question.

35
Why is it hard to take a high quality image of far away objects (like Pluto) using a high-tech space telescope?
6
Is NICER/SEXTANT the first civilian "spacecraft" to determine it's own position in space without GPS or uplinked data?
0
Could Breakthrough Starshot proposed propulsion system be used in a regular size probe to accelerate it faster than any probe has been before?
20
Has any object launched from Earth gone into the Sun?
4
Has a probe ever been lost due to folding its antenna, making it unable to communicate?
12
How come there are so few TNOs the Voyager probes and New Horizons can visit?