For a hypothetical high-power nuclear spacecraft, where does the waste heat go?

It seems that all nuclear propulsion concepts extract fission energy as heat, and somehow convert a portion of that heat to energy in the desired form, such as electrical (e.g. to power an ion thruster). It always amounts to creating heat in one part of the system and dumping waste heat somewhere else. For example: using a working fluid that is heated, perhaps discharged through a turbine, cooled, and sent back to the heat source. As the turbine (for example) extracts mechanical energy from the working fluid, the equivalent heat energy is removed. Nevertheless, there is still a lot of waste heat to be dissipated somewhere.

My question is: in the higher power concepts, how is all that waste heat removed from the spacecraft? In the vacuum of space, it can only leave by radiation. So wouldn't that require a very large array of radiators? Wouldn't that add a significant amount of mass to the spacecraft, affecting the overall mass efficiency?

As a secondary question: would the radiation pressure from "waste" heat for a nuclear powered electric engine be enough to make a worthwhile contribution to spacecraft thrust?

As you stated, radiation is the only method of removing excess heat from a conventional spacecraft in vacuum. Designing a spacecraft to radiate heat appropriately is important and yes, it does add mass to the overall thermal control system. The best way to reduce that mass is to try and ensure the spacecraft doesn't need to radiate as much heat. For example, heat is desirable for maintaining electronics, propellant, or other components within required temperature ranges, so taking advantage of a nuclear source to provide that heat makes it an asset instead of waste (or at least some of it).

On the other hand, if you are talking about a nuclear thermal rocket engine then most of the heat generated by the nuclear source is ejected along with the exhaust. (See Deer Hunter's comments below.)

For your secondary question: using heat radiation pressure for thrust has definitely been considered (check out nuclear photonic propulsion). Also, that kind of effect has been observed as a perturbation on spacecraft already (see the Pioneer effect). 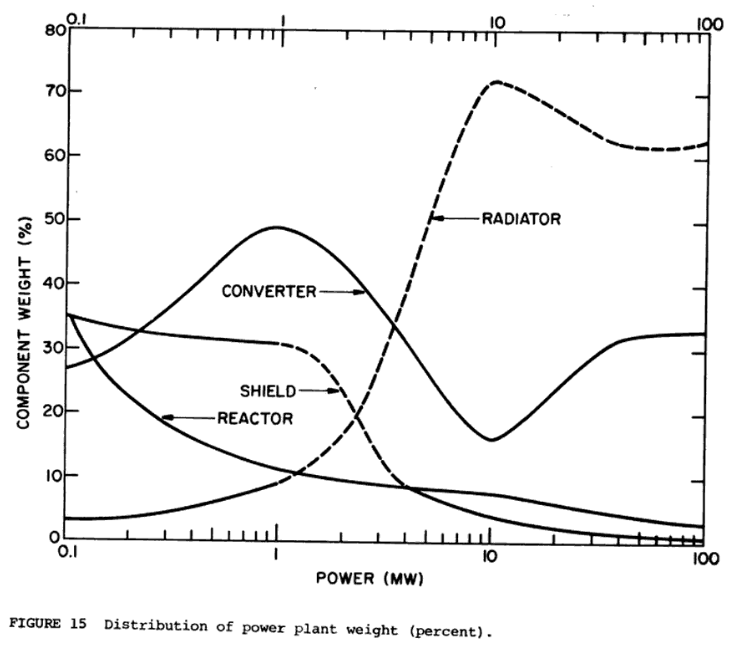 Not the answer you're looking for? Browse other questions tagged nuclear or ask your own question.

4
How does a radiator work fast enough on a space craft?

12
Is there an alternative to nuclear reactors for high-power spacecraft?
3
How heavy does radiation shielding have to be for a nuclear power plant on a crewed spaceship?
3
Is the waste heat (sink) system dependent on whether the energy source is nuclear or solar?
2
What is the basis of the new Russian nuclear rocket propulsion?
3
Is the BBC's explanation of nuclear thermal electric propulsion wrong?
2
Using recent technology, how much electrical power could a nuclear reactor launchable by a low-level heavy-lift vehicle be developed to produce?
6
Would capture of a uranium-rich asteroid open new possibilities?
2
With Ultra Safe Nuclear engines and hydrogen propellant, how far to Mars could you get and still be able to return to Earth in an emergency?
5
What is the relationship (if any) between NASA's Kilopower project and its request for 40 kW reactor designs?