Could the SpaceShipOne fly again?

A similar question to that one, but this one is concerning the suborbital SpaceShipOne spaceplane. Could it be reactivated for space tourism or other purposes? I remember in 2011 some sources stated that the SpaceShipOne also was to be used for tourism flights, along with the SpaceShipTwo or something like that.

There is absolutely no reason to ever even conceive of flying it again. It was retired because it successfully did the sole task it was designed to do.

SpaceShipOne was unsafe1, barely met its requirements2 (which was certainly good enough) and was designed specifically and solely to win the prize.

The tiny crew compartment meant that there was zero incentive to certify it for passengers; it would certainly have not been economic for tourist flights. 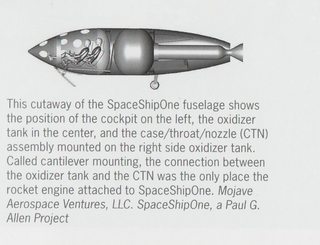 I wouldn't call it a prototype since it was designed to meet certain requirements, met them, and was retired before it killed anybody.

1 "SpaceShipOne had lost control. It spiraled up, making twenty-nine rotations."

2 "To solve the problem that SpaceShipOne barely reached space even when much lighter than it would have been for an Ansari X Prize attempt..."

SpaceShipOne was retired so quickly because it was a prototype.

One of the key lessons-learned over the last seventy-plus years was that the waterfall model does not work when applied to creating something that is substantially new.

A final key lesson-learned is that prototypes should be tossed. The purpose of building a prototype is to start solving the blank sheet of paper problem. In doing so, many of the rules regarding what constitutes good engineering judgment oftentimes were ignored.

Not all organizations have learned this lesson. Scaled Composites apparently has. They built a functional prototype, gained some knowledge from that endeavor, and then they threw it out. They then built another prototype and they threw that out, too.

Not the answer you're looking for? Browse other questions tagged sub-orbital spaceplane tourism virgin-galactic or ask your own question.

8
Might either the Buran or the Space Shuttle fly again, or similar spacecraft be built in the future?

11
What distinguishes a sounding rocket from a suborbital flight?
6
Could the 'anomaly' in the recent Virgin Galactic crash impact the other SpaceShipTwos?
5
What are the synergies between today's suborbital private businesses and space flight?
4
What are the main synergies between sub-orbital and orbital space launch?
6
Why did Virgin Galactic switch back to HTPB after one launch using thermoplastic polyamide (i.e. nylon)?
3
What does it take for a craft to perform a flight simulating weightlessness without having to fly a steep parabola/ellipse?
4
Why did the SpaceShipTwo's ascent have to be aborted if the feather system wasn't unlocked in time?
3
Is Virgin Galactic still targeting high speed suborbital flights, or just space tourism?