Orbiting Earth before heading to Moon

Each of the lunar Apollo missions (Apollo 8-17) entered Earth orbit immediately after launch. Each mission then left Earth after a few orbits by burning the S-IVB engine, and headed off to the Moon. (https://en.wikipedia.org/wiki/Apollo_program#Lunar_mission_profile)

The wikpedia page says orbiting Earth was necessary "to verify readiness of spacecraft systems", but I'm curious how this affected fuel requirements and other aspects of navigation. Would heading toward the Moon directly from the launch pad have required more or less fuel? If orbiting earth first is less efficient, how much extra fuel does it require over leaving directly?

Going from Earth's surface direct to Moon orbit without stopping in LEO would offer negligible savings -- depending on your assumptions, maybe 20 m/s worth of ∆v (and 2-3 hours worth of consumables).1

According to Apollo By The Numbers and Bob Braeunig's simulations, the ∆v budget for launch to orbit plus trans-lunar injection for the Apollo missions totalled about 12250 m/s, so any difference would be far less than 1% of the fuel budget.

The wikpedia page says orbiting Earth was necessary "to verify readiness of spacecraft systems", but I'm curious how this affected fuel requirements and other aspects of navigation.

The use of a parking orbit most likely saved fuel compared to a direct translunar insertion. A direct insertion into a translunar trajectory would have saved a tiny amount of fuel compared to that need by adding a parking orbit if everything went perfectly. However, nothing ever works perfectly. Rocket thrust varies, and navigation sensors are imperfect. Launch in the Apollo era was largely a dead reckoning process; there was no such thing as GPS in the Apollo era.

This meant that navigation errors built up during launch. A launch directly into a translunar trajectory would have meant correcting for those errors and the injection error after the launch+injection. This would have more than offset the tiny extra cost of placing the vehicle into a parking orbit before undergoing the translunar injection. With a parking orbit, most of the launch errors were corrected for by the translunar injection burn. Correction burns were still needed, but these were much smaller than those that would have been needed for a direct launch.

Much more importantly, the use of a parking orbit made the missions possible. A direct translunar insertion launch would have required an instantaneous launch window. The launch would have had to have been delayed by a day (or perhaps by several months) if something went wrong during the countdown in the case of a direct insertion into a translunar trajectory. Mission planners deemed that a 2.5 hour launch window was the minimum needed to have a reasonable chance of success. This alone ruled out the possibility of a launch directly into a translunar trajectory.

Once altitude is gained, the most efficient way to achieve orbital velocity is by a horizontal burn. You could do the major burn along a non zero flight path angle but then the vertical component of the thrust suffers gravity loss. 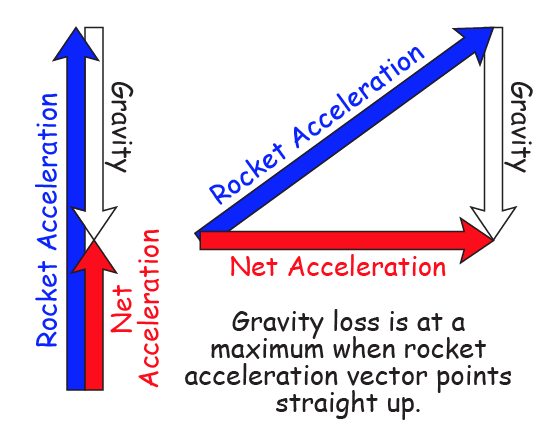 Typically, the first part of a space ship's trajectory is nearly vertical but then leans to the east to give the thrust vector a bigger horizontal component as the atmosphere gets thinner.

When the ship's above the atmosphere it does the major burn and is traveling at a near zero flight path angle (In other words, horizontally).

Or it could cut off the engines after achieving orbital velocity and the do the remaining 3.1 km/s TLI burn later. What is the difference is delta V? Zero.

The Townsend technique begins by assuming that all space launches consist of a direct ascent to a low circular parking orbit, followed by a series of on-orbit maneuvers to the final destination orbit. In fact, many launch vehicles fly only a direct-ascent trajectory, even to a high or non- circular orbit. However, an observation of these trajectories almost invariably finds the launch vehicle, at an altitude of a few hundred kilometers, accelerating almost horizontally through the local circular orbit velocity. One may simplify the problem by treating this as an instantaneous "parking orbit", reached by direct ascent, and with all subsequent powered flight treated as an "on-orbit maneuver".

Again, virtually all trajectories are in low earth orbit for a time. Sometimes very briefly, some times in an extended parking orbit.

Not the answer you're looking for? Browse other questions tagged orbital-mechanics apollo-program astrodynamics or ask your own question.

46
Why did Saturn V not head straight to the moon?
16
Non-orbital takeoff and landing?
1
Do we travel horizontally in same plane or vertically while exploring space?

28
Reasons behind the “Transposition, docking and extraction” maneuver
6
'Orbiting' Earth-Moon L1
39
If the Apollo mandate were delivered today, would the mission vehicle(s) and profile be similar?
14
Multiple aerobraking
4
Would the Saturn V have been able to send more mass to TLI if it had a lower earth parking orbit?
16
Why was TESS' launch window open for only 40 seconds per day?
2
If a spacecraft is orbiting around the Moon, what direction would the nadir axis be?
10
Why could the Lunar Ascent Engine be used only once?
14
Why was the Saturn V considered to be human-rated after Apollo 6?
1
What is the cheapest possible way to land a crew of 2 on the moon?