How far can you travel until you can't get back to where you started?

I searched for this question but couldn't find it, so I'm asking. Lets just ignore turning into a liquid at high accelerations and the fact that an object with mass cannot travel at the speed of light (I say that last one because as your velocity approaches the speed of light, we could just say it is the speed of light, and then just say its less than the answer you get from the math). So since the distances in the universe change over time, and the velocity it takes to travel those distances also changes, there exists places that are impossible to reach, as it would require faster than light travel. My question then becomes, if I intended to return to my starting point, how far could I travel until returning would become impossible?

Now the equation above require you to know how exactly scale factor $a(t)$ will evolve in the future which is determined by the matter. Luckily the problem is much simplified as we entered the dark energy dominated era with dark energy most likely being just a cosmological constant. We then assume that the Hubble parameter is approximately constant (actually it will gradually drop by about 20% as matter will disperse and its contribution will decrease), \begin{equation} H\equiv\frac{1}{t_H}\equiv\frac{\dot{a}}{a}\simeq \mathrm{const},\Rightarrow a(t)=e^{t/t_H} \end{equation} With $t_H\approx 14.4 Gy$ (where Gy stands for gigayear i.e. billion years) Then, \begin{equation} \Delta x(t_0,t_1)=ct_H\Big(e^{-t_0/t_H}-e^{-t_1/t_H}\Big) \end{equation} Note that if we take $t_0=0$ (i.e. shoot the light pulse now) the fartherst point it may get is $c t_H$. This is the cosmological event horizon - anything further can't be reached because of the universe expansion. The point of no return for light is defined in such a way that when light reaches it the point of departure is exactly on its cosmologial event horizon.

To put those numbers into perspective the age of the universe is 13.8 Gy, the radius of the observable universe is 45.7 Gly.

UPD: By the way there's a very simple way to understand that for any FRLW cosmology with event horizon the sphere of no return will always have the radius equal to half of the horizon radius. To do so you need to use conformal time, \begin{equation} \tau=\int \frac{dt}{a(t)},\quad ds^2=a^2(\tau)\Big(c^2 d\tau^2-d\vec{x}^2\Big) \end{equation} The nice thing about the conformal time is that lightcones look very simple, just like in the flat spacetime $\Delta x=c \Delta \tau$. But how cosmological horizons then appear, what prevents lightcones from intersecting with some wordline $x=\mathrm{const}$? This happens when $a$ grows sufficiently fast, then $\tau$ happens to be restricted by some finite $\tau_{max}$ where $a\rightarrow+\infty$. So for lightcones this looks just like a Minkowski spacetime where you cut off everything after $\tau_{max}$. If the intersection lies exactly at $\tau_{max}$ this is a horizon, if it happens after that then no signal can pass.

From that it's obvious that the cosmological horizon for $x=0$ is the past lightcone originating at $\tau_{max}$ i.e. $|\vec{x}_H|=c(\tau_{max}-\tau)$ To find the point of no return we send lightsignal $x=c(\tau-\tau_0)$ and look where it intersects with the horizon lightcone. It's pretty obvious that the intersection will happen at $x_{NR}=x_H/2=\frac{c}{2}(\tau_{max}-\tau_0)$. For better understanding I add the illustration. Again I remind you that this is true for any $a(t)$ growing sufficiently fast in time. 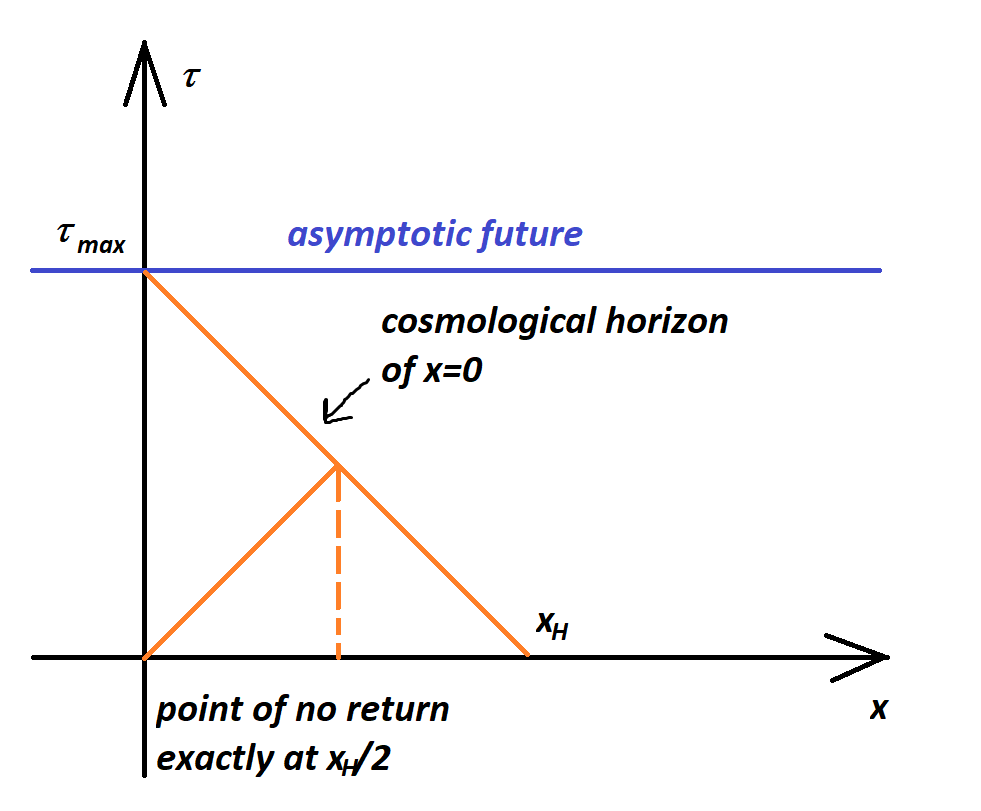 Nobody knows for sure.

Recent WMAP experiments suggest a planar Universe in this, the answer for your question is infinite. If the Universe has a spherical space-like geometry, its radius seems to be at least 300billion light years.

Note, this is only a theoretical thing, because even if you are going with $c$, the Universe expands faster. It is not known, what will happen to it on the long term. Currently an accelerating expansion is visible, but also decelerating expansion and exponential acceleration were already happened.

I'm very much not an expert on the subject, but my understanding of the problem is this:

The universe, to our knowledge expands at a steady rate of 0.007% per million years. All of it.

Doesn't sound like much. but ask a financier about the value of compound interest.. essentially, the more money you have, the better 0.007% sounds. If I have 7000 dollarpounds in my bank account, that'll be an extra dollarpound per million years. But if I have $£7,000,000, then I'll have an extra 1000 dollarpounds.

So, if it's 2.5 million lightyears from here to Andromeda. then in a million years that distance will have grown by 17,500 lightyears. (ignoring that andromeda is in reality moving towards us under the effects of mutual gravity)

Measure a wide enough region and the overall growth of that region per million years will exceed a million lightyears at a time.

That's your limit. you can't go faster than light, but the universe's expansion is not limited by that. so eventually every body in the universe will pass that limit relative to one another and be isolated. forever.

By my math, Assuming you can travel at the speed of light, the furthest away an object can be and still be reachable at all is 142,857,142.857 Lightyears away.

Anything further away than that is accelerating away faster than you can ever catch up to.

Provided that your destination will still be within 142.86 million lightyears of your starting point when you get there, you should still be able to get home after the 284 million year round-trip.

This is however thrown off kilter by things like your own acceleration, I'm assuming you can accelerate instantly and decelerate just as fast.

What worries me is that I've come to a substantially smaller conclusion to all these much more knowledgable people who are also answering the question. I think I'm missing something important.

Not the answer you're looking for? Browse other questions tagged time or ask your own question.

7
What percentage of the universe's galaxies are within our reply-lightcone before they're Hubble-flow expanded away too far to reply?

7
Which astronaut has experienced the largest relativistic shift in time (relative to Earth's surface)?