How do astronauts battle loss in blood volume in microgravity?

Past manned space missions teach us that the loss in gravity gradient has an adverse effect on the blood volume of astronauts. Our bodies are simply built to expect pressure gradient and in gravity, that pressure would be highest in our lower body and smaller in our upper body at least for the most part of the day (might not be exactly true during sleep). Problem is, that especially the higher than expected blood pressure in the head than the rest of the body sends to the body a signal that it has too much blood, or at least so it is described in this NASA Science News article:

Higher blood pressure in the head raises an alarm: The body has too much blood! Within two to three days of weightlessness, astronauts can lose as much as 22 percent of their blood volume as a result of that errant message. This change affects the heart, too. "If you have less blood," explains Dr. Victor Schneider, research medical officer for NASA headquarters, "then your heart doesn't need to pump as hard. It's going to atrophy."

This might result in potentially unwanted side effects, possibly more severe on astronauts' return to gravity (some of you might remember Heidemarie Stefanyshyn-Piper collapsing during the speech after returning from the STS-115 Atlantis mission in September 2006 - YouTube video) than while in microgravity, and astronauts returning from missions in space are now carried and sat on chairs so they can adjust a bit before other duties come calling. 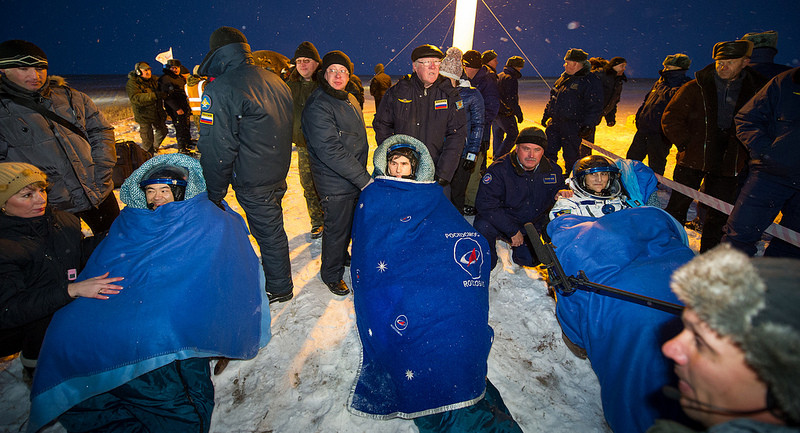 "Each of the parameters have their own normal recovery time," says Schneider. Blood volume, for example, is typically restored within a few days. "Astronauts get thirsty when they come back," Schneider explains, "because their body says, you don't have enough blood in your blood vessels, and that causes the messengers to say, drink more. [Also, the body doesn't] urinate as much."

But while this readjustment to gravity period might last only a few days to restore the lost blood volume (it might last a lot longer to restore bone and muscle mass though), it still can not be easily dismissed and this brings me to my question:

How do astronauts nowadays fight blood volume loss? Do they take any medication to help them with the loss in pressure gradient while in space, on their return, or both? Do they do any exercises that would at least temporarily restore normal pressure gradient within the body? And have any astronauts reported longer lasting side effects or developed other cardiovascular atrophy that might take longer to recover?

The Canadian Space Agency (CSA) was helpful on Twitter (@csa_asc in English and @asc_csa in French language) and answered a couple of my questions. This is in response to a general question in the title:

Me: How do astronauts battle loss in blood volume in microgravity?

And their response on asking about ongoing cardiovascular research projects under their umbrella:

Me: Do ISS astronauts take any medication to help combat the loss in blood pressure gradient? Any progress on BP REG/VASCULAR/CCISS?

CSA: BPReg & Vascular are still underway on the #ISS and going well! Here's one of 4 papers from CCISS http://t.co/Z3C2fPFLq1

Not the answer you're looking for? Browse other questions tagged microgravity medical humans cardiovascular pressure-gradient-loss or ask your own question.

13
Is water on-board space-craft (such as ISS) rationed?
12
What kind of biological research does the ISS do?
8
How often do astronauts suffer headaches, migraines, etc. in microgravity?

21
Does long-term residence on the ISS affect eyesight?
8
How often do astronauts suffer headaches, migraines, etc. in microgravity?
12
Do astronauts take any pills to battle bone density loss?
10
Do Astronauts snore when sleeping in Zero G?
13
Would human “superpowers” in low gravity fade away through reduced muscle mass?
7
How might artificial gravity experiments be conducted to determine adaptation in mice?
45
Has any human ever had the choice to leave Earth permanently?
2
What are the biological effects of a toe-to-head force gradient upon a human over the long term?
7
How will SpaceX's Starship accommodate its 100 passengers from the effects of micro-gravity?
6
What effects would the longer days on Mars have on humans?