Can I obtain the audio of president Eisenhowers message coming to me from a satellite circling in outer space?

I remember hearing a recording of this speech some time ago. However searching for it again has been difficult, which led me to believe that I probably heard a recreation from someone else. In this qz.com article on the event I found a transcript of the speech, and here an audio file. I would like to know if they are genuine, and if not, if I can find a genuine version of it.

This is the President of the United States speaking. Through the marvels of scientific advances my voice is coming to you from a satellite circling in outer space. My message is a simple one. Through this unique means I convey to you and to all mankind America’s wish for peace on earth and good will toward men everywhere. 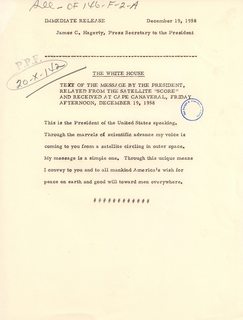 Sure you can! Eisenhower's recorded transmission appears within the first minute of the YouTube video below. This seems to be part of the "Recently rediscovered audio recordings from the JPL archives..."

One of these vintage recordings comes from NASA's first communications satellite, Project Echo, which bounced radio signals off a 10-story-high, aluminum-coated balloon orbiting Earth in 1960. This form of "passive" satellite communication -- which they dubbed a "satelloon" -- was an idea conceived by an engineer from NASA's Langley Research Center, Hampton, Virginia, and a project managed by NASA's Goddard Space Flight Center in Greenbelt, Maryland. JPL's role involved sending and receiving signals through two of its 85-foot-diameter antennas at the West Coast Goldstone tracking station in the Mojave Desert.

The Echo transmissions include a greeting from President Dwight D. Eisenhower, explaining how Echo fit into the U.S. program of peaceful space research accessible to other countries, and a message from then-Senator Lyndon B. Johnson imagining a "not too distant future when one man, one program, can be seen and heard simultaneously in every living room of the world.

This video is one of several in a group of interesting vintage space items in the NASA Jet Propulsion Laboratory YouTube channel:

Not the answer you're looking for? Browse other questions tagged artificial-satellite history american or ask your own question.

7
Sending a satellite towards or away from the Sun
21
What is the oldest orbital satellite we can contact?
5
Can a space station have its own satellite?
10
How to obtain UTC of the epoch time in a satellite TLE (two line element)?
24
Is the Pi really fit for outer space?
5
Can you operate a satellite in the disposal “graveyard” region
12
How does a space probe differ from a satellite in terms of materials used and size?
0
Can satellites launched from space run only on electricity?
5
Can the electric field of the Earth's be used for satellite maneuvering?