The BBC's Climate change: Satellite fix safeguards Antarctic data explains that earlier problems of missing data near the coasts have been addressed, and though scientists are hopeful, there is lingering concern:

Sentinel-3's data still needs work where the terrain is steeply sloping - at the edges of Antarctica and along its peninsula - but in its first elevation map of the continent, the satellite is capturing the key areas of mass loss in the western ice sheet.

"Around Pine Island and Thwaites, it's clearly picking out the main signals of dynamic imbalance. These are the hotspots of thinning. So, it's seeing the important stuff," said Dr McMillan.

"The peninsula has always been difficult for radar altimeters, just because of the size of the radar footprint versus the size of the glaciers. But I think this is something that will evolve.

"It's easy to forget the Sentinel-3 mission is new and it's likely that as more people work on its data with new approaches - it will be possible to extract more information."

The article then explains the superiority of the Cryosat radar altimeter for these areas especially:

The question for the European Union and its technical partner, the European Space Agency, is whether they could do even better?

The Cryosat spacecraft - as its name suggests - is a specialised ice-monitoring satellite. It was an experiment with dual-antenna technology that outperforms all other radar altimeters in those hard-to-sense mountainous locations.

"Ground processing can be upgraded after launch, but not the altimeter itself," commented Dr Amandine Guillot from the French space agency (Cnes)

"That's why, for example, the Sentinel-3 altimeter is not able to retrieve as much data as Cryosat over the coastal zone of Antarctica.

"That is why the Cristal mission, which has the primary objective of ice monitoring, has a real added-value with respect to the Sentinel-3 mission."

THE QUESTION: What is it exactly about Cryosat's "dual antenna interferometer that can better discern steep slopes" of Antarctic ice than Sentinel-3's radar? 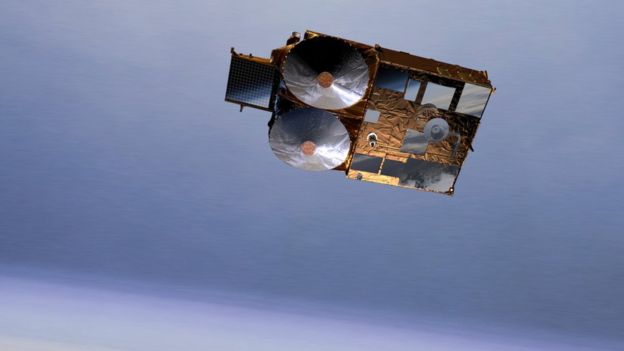 The SIRAL instrument has better spatial resolution due to its waveform processing:

Unlike conventional radar altimeters, where the interval between pulses is about 500 us, the CryoSat-2 altimeter will send a burst of pulses with an interval of only 50 us between them. The returning echoes will be correlated, and by treating the whole burst at once, the data processor can separate the echo into strips arranged across the track by exploiting the slight frequency shifts (caused by the Doppler effect) in the forward- and aft-looking parts of the beam.

The two antennas are part of this modulation scheme.

Each strip is about 250 m wide and the interval between bursts is arranged so that the satellite moves forward by 250 m each time. The strips laid down by successive bursts can therefore be superimposed on each other and averaged to reduce noise. This mode of operation is called the Synthetic Aperture Radar, or SAR mode.  

Phase difference between returning radar waves In order to measure the arrival angle, a second receive antenna is activated to receive the radar echo with two antennas simultaneously. When the echo comes from a point not directly beneath the satellite there will be a difference in the path-length of the radar wave, which will be measured. Simple geometry provides the angle between the baseline, joining the antennas, and the echo direction.

Effectively, SAR processing with the two antennas is used in place of a single larger antenna and imaging sensor.

6
Why is Sentinel 3B's dish antenna overwrapped with metallized film?
0
Why are ICESAT-2 and CRYOSAT 2 both at inclinations of almost exactly 92 degrees?