What is known about these early Falcon XX concepts?

I came across this page with the following picture from 2010: 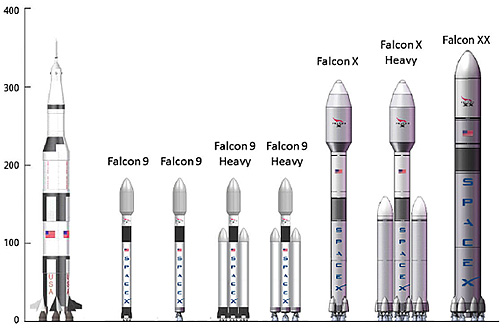 I must say the Falcon X, Falcon X heavy and Falcon XX look rather interesting.

Does anybody know of resources that explain the intended role/function of these abandoned spacecraft, or their intended Payload to LEO or engine layout?

The plan was to start with a new engine, the Merlin 2, which would be large enough that 1 engine could lift the Falcon 9. These single-engine F9 and FH are shown in the image in the question.

Falcon X is a two-stage launch vehicle standing more than 75 meters tall with a core diameter of approximately 6 meters. Its first stage would have used three Merlin 2 engines operating at 70% for a total liftoff thrust of 16,000 Kilonewtons (1,630 metric tons). With three Merlin engines powering the first stage, the launcher would provide engine-out capability.

As with Falcon 9 Heavy, the Falcon X launch system would include a heavy version using three identical cores, each sporting three Merlin 2 engines for a liftoff thrust of 48 Meganewtons (4,890 metric tons). The vehicle would likely use the same upper stage as Falcon X. This configuration would be capable of launching payloads of up to 125 metric tons to Low Earth Orbit.

Falcon XX is a single core launch vehicle with a diameter of 10 meters and an estimated length of about 100 meters using six Merlin 2 engines operating at the 100% thrust setting on its first stage creating a liftoff thrust of 45,360 Kilonewtons (4,625 metric tons).

BFR or Big Falcon Rocket (or Big F… Rocket) was a phrase coined around 2005 as a title for future heavy-lift SpaceX rockets including the Falcon X/XX and other potential designs.

The presentation has been archived over on NasaSpaceflight and at SpaceRef (direct PDF link, better quality but larger than the one at NSF)

Not the answer you're looking for? Browse other questions tagged spacex history or ask your own question.

27
How realistic would the Sea Dragon engine be to produce given today's technology?