What is/was Spitzer's schedule for end-of-life and what will be its final status?

The best infrared eye in the universe† has closed, and scientists will need to wait at least a year before any similar instrument is at work again.

NASA turned off its Spitzer Space Telescope yesterday (Jan. 30), ending a 16-year mission. The agency at first stretched the observatory's tenure to overlap with that of the next great infrared space telescope, the James Webb Space Telescope. But as that instrument continued to miss schedule targets, with a March 2021 launch currently targeted, NASA eventually concluded that a year's gap in infrared observations of the universe wouldn't harm science.

In addition to being a telescope, it also a spacecraft with a trajectory, mass, power and possibly some propulsion.

Question: What is/was the actual schedule for the steps involved in Spitzer's end-of-life and what will be its final status? Will it be adrift without any communications?

†that we know of at least. 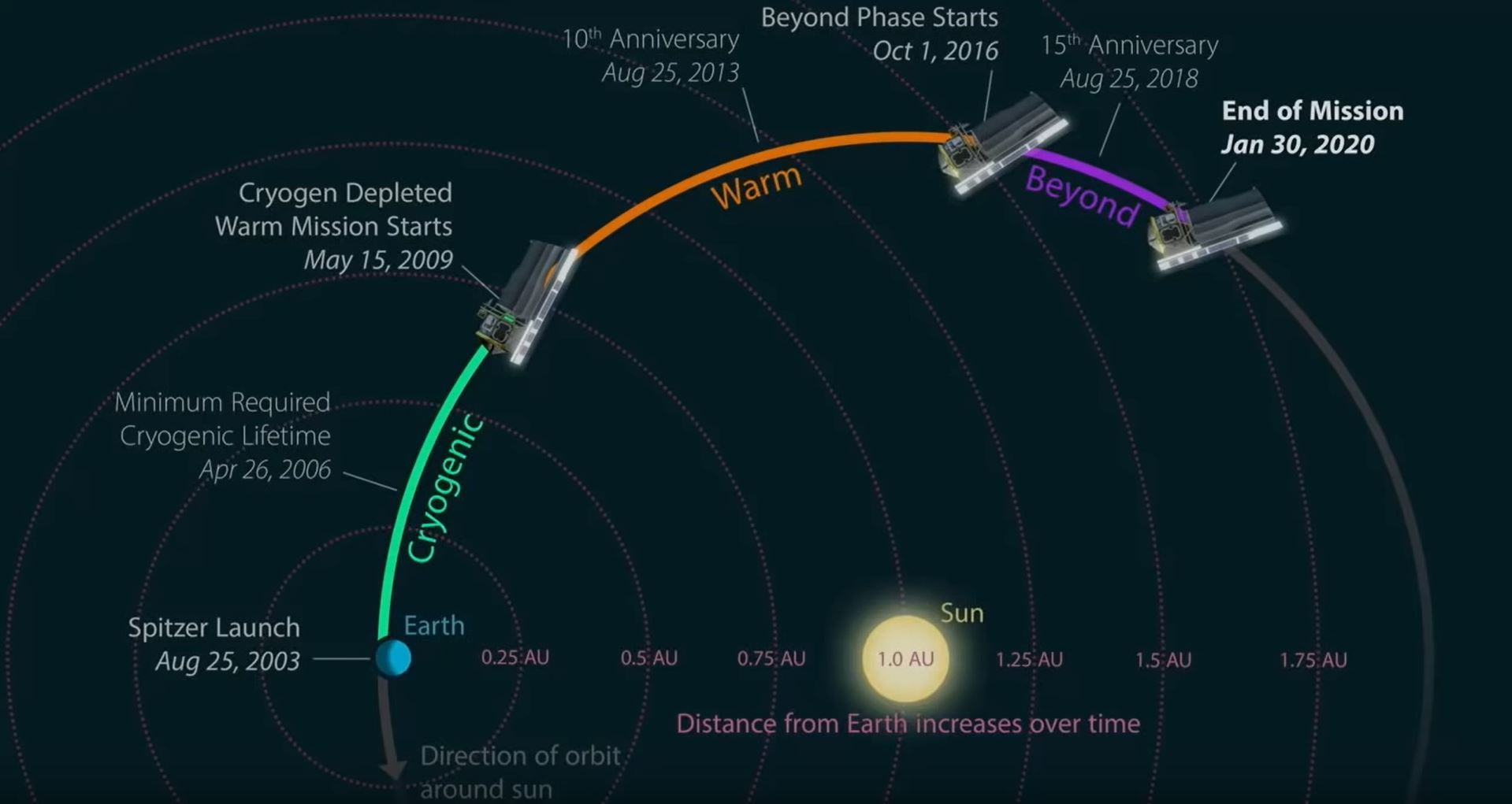 NASA's Spitzer Space Telescope's career had three phases, seen in this visualization. It was designed to stay cool, operating at temperatures as low as minus 450 degrees Fahrenheit (minus 267 degrees Celsius). In 2009, Spitzer ended its "cold mission" when it exhausted its supply of helium coolant, but it was able to avoid warming up too much, thanks to its increasing distance from Earth. Spitzer's "warm mission" has lasted for over a decade, nearly twice as long as the cold mission. (Image credit: NASA/Youtube)

Ground teams at JPL uplinked a command to Spitzer through NASA’s Deep Space Network station in Goldstone, California, for the spacecraft to enter safe mode. The command put Spitzer in a “sun-coning” attitude that keeps sunlight on the spacecraft’s power-generating solar arrays.

[Project manager Joseph] Hunt said the faint carrier radio signal from Spitzer “will continue as long as the spacecraft does not have some kind of anomaly on-board.”

“This signal will continue to reduce in strength because we continue to recede away from Earth,” Hunt said. “In about 2053, we will come back past the Earth. We’ll be nine times the distance from the Earth to the moon, and we’ll head back out in the opposite direction. The signal is very weak, and it would take a special ground receiver to actually acquire the signal, and a special team of people and some special hardware to do that.”

Not the answer you're looking for? Browse other questions tagged spitzer-space-telescope end-of-life or ask your own question.

20
What are the end-of-life options for large classified satellites?
13
Is there an end-of-life policy for Martian satellites?
4
What will (or did) end of mission look like for the MarCo cubesats?