Why did Apollo 13 not use the electronics waste heat to raise the Lunar Module cabin temperature?

About 300 W of waste heat plus the body heat of three astronauts, about 250 W, together about 550 W should be enough to heat the small LM cabin. Why they could not use this heat source?

A means to transfer heat from the electronics to the cabin was simply not designed into the LM. It's worth noting that the LM had a very different approach to thermal management than the CSM.

The electronics of the command module were inside the atmosphere of its cabin. This meant that a significant amount of heat from the electronics could conduct (or even convect) into the cabin. Of course, a thermal management system was critical to keep people and equipment from overheating.

The LM ascent stage was constructed in three sections. The forward section was where the astronauts stood during landing and launch; the forward wall contained the windows and the hatch to get to the lunar surface. The mid section had the ascent engine, docking tunnel, docking hatch, and the rear wall of the cabin. The aft section contained most of the electronics and a few of the tanks; it was not part of the cabin. Because the electronics were exposed to the vacuum of space, their heat could not convect or easily conduct into the cabin.

Getting rid of excess heat from the electronics was an issue for each spacecraft. In both cases, the electronics were mounted on rails which had a glycol cooling solution circulating through them. In the CSM, the glycol circulated in a closed system to radiator panels on the exterior of the service module, where the heat was radiated away.

Radiator panels would have been too heavy for the LM, so a different approach was taken. The glycol circulated to a set of evaporator plates, where plain water evaporated to space. Although such an open system required more water than a closed system like the CSM, it still weighed less than having radiator panels, because water has an extremely high heat of sublimation.

For both spacecraft in most circumstances, activities in the cabins were expected to produce excess heat, so thermal management was designed around carrying heat away from the cabin. Nonetheless, the possibility of the cabin being too cold was considered, so both spacecraft had electric heaters for this purpose. It would have been possible to design a system to use the hot glycol to heat the cabin, but compared to electric heaters such a design would have more complexity, more weight, and less reliability.

Because Apollo 13 needed to conserve electricity, the cabin heaters were not used. Some of the electronics were still used and they produced waste heat, but without the plumbing to bring this heat into the cabin, the cabin got cold.

A modified diagram of the LM coolant loops: 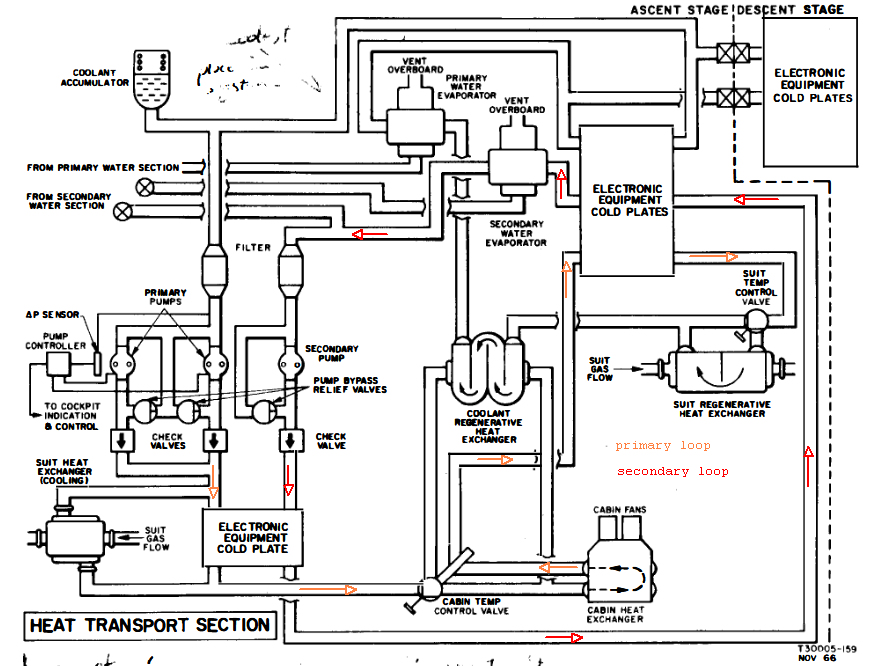 The secondary coolant loop contains only cold plates for the electronics but no cabin heat exchanger. In the second loop heat is transfered from the cold plates only to the sublimators but not to the cabin. See the red arrows.

In the primary loop some cold plates are placed before the cabin heat exchanger and some after it. See the orange arrows. So only a part of the heat could be transfered from the cold plates to the cabin.

I had a girl friend who hated her hands being so cold driving to work in winter, so I modified a pair of leather driving gloves, adding a 1/4 watt resister to the backside of each finger bone segment, 14 in all, 2 for the thumb and three for each of the 4 fingers. Total power input for one hand = 2.8 watts.

In the frozen dead of winter she could only energize them for 10 minutes before breaking a sweat and had to de-energize.

So 2.8 watts, applied correctly, has proven to be too much heat.

The astronauts EVA suits must have had thermal management requireing far less energy to heat, even unpowered should have made them warm by insulation. Those suits had air in/out ports that could have been duct taped to the cabin air heat exchanger ports. Heat the people, not the room.

More could have been done is all I am saying..

And 300 watts is about 0.4 horse power. Once a horse stepped on my foot. His front left hoof, adorned with a nice steel horse shoe, enveloped without pinching my toes my entire right foot. His shoe fit nicely all around my shoe. Trapped there (oddly not panicking) I soon realized just how powerful is 1/4 horse power. One of 4 horse feet.

Note: if you ask the horse calmly, he will free you from under his foot. In fact this one seemed a little embarrased by it.

300 Watts that's about 900 BTU's not alot of energy to warm up the volume of the space ship. Physics. It takes 19 BTU’s of energy to change the temperature of 1000 cubic feet of air one degree Fahrenheit. PLus the ship didn't have much power to spare for heating, using waste heat means having to find a means to divert that waste heat somehow?

LazyReaderLazyReader
1
$\endgroup$
1
Add a comment  |
Highly active question. Earn 10 reputation (not counting the association bonus) in order to answer this question. The reputation requirement helps protect this question from spam and non-answer activity.

Not the answer you're looking for? Browse other questions tagged apollo-13 or ask your own question.