Where is the Wind going? Where has it been? (Global Geospace Science spacecraft 1994-071A)

This excellent answer to Why put DSCOVR in a Lissajous orbit? Wouldn't a halo orbit completely avoid the Sun exclusion zone? explains that the Global Geospace Science or Wind spacecraft 1994-071A was originally put in a Lisajous orbit about the Sun-Earth L1 point as a propellant-saving choice over a halo orbit (the difference is explained in the linked question).

It goes on to explain that in 2020 during a mission extension, the decision was made to use >14 kg of fuel and move it to a halo orbit about Sun-Earth L1.

Wikipedia's take seems to be that it was moved to a Sun-Earth L1 halo orbit in 2004, and clicking through from https://wind.nasa.gov/ to https://spdf.gsfc.nasa.gov/data_orbits.html to https://hpde.io/SMWG/Observatory/Wind leads to the image below which makes my head spin.

Question: Where is the Wind going? Where has it been? (Global Geospace Science spacecraft 1994-071A)

Is there a tabular breakdown of what orbit's it has been in from launch until to today, and the plans for the future?* Something with dates and simple phrases that best describe its orbital status?

That of course might not be possible! I don't know if the image shows two halo orbits and to high elliptical orbits, or a single 3-body trajectory.

Where has it been?

The Wind spacecraft has been all over the near-Earth environment, as is shown below in the image: 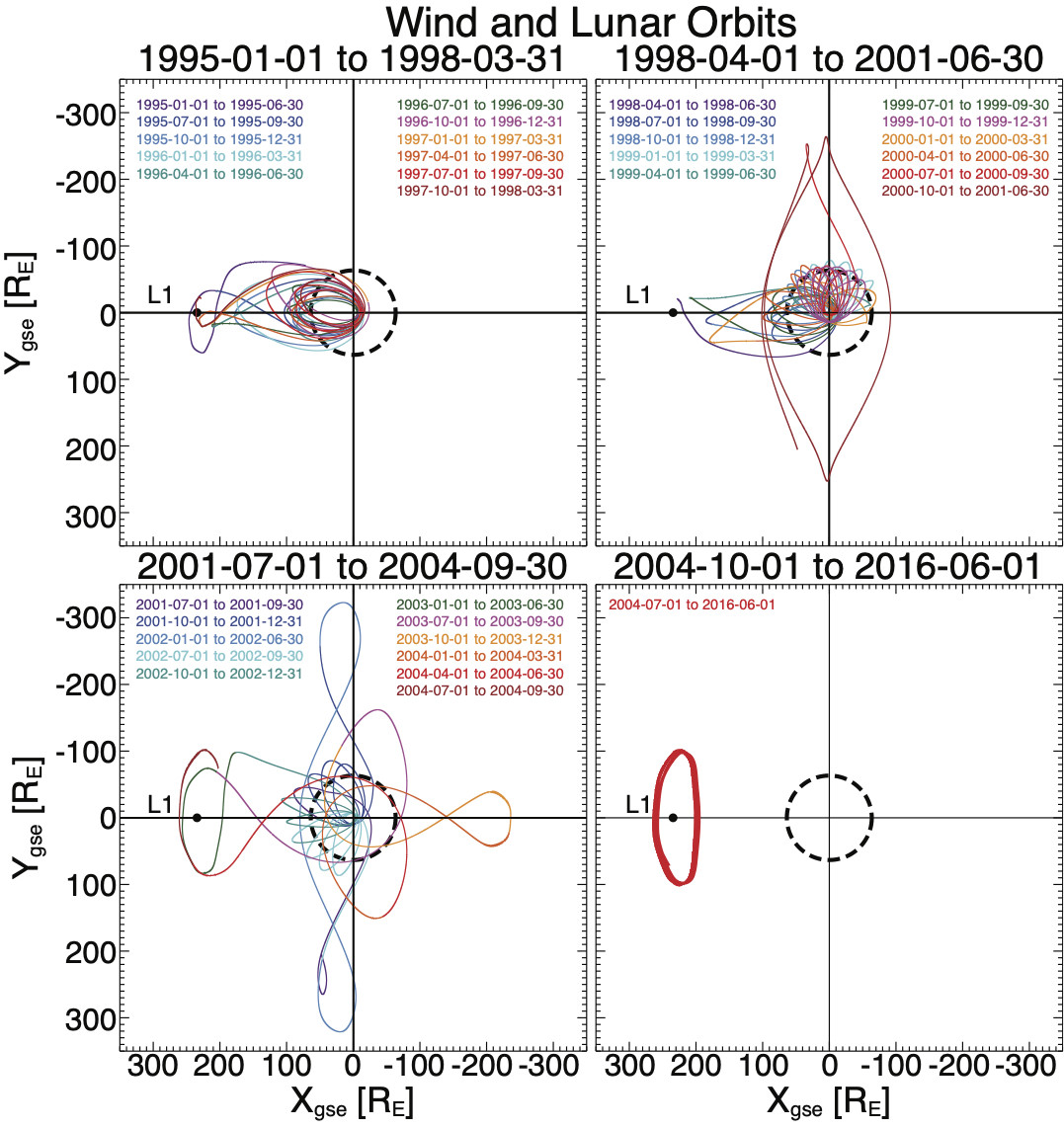 Figure 1. Orbital trajectories of the Wind spacecraft in the GSE XY plane from November 1, 1994 to June 1, 2016. Colors denote time ranges as indicated. The dashed black circle indicates the Moon’s orbit [i.e., Figure 1 from Wilson et al., 2021]. Note that the orbit has not noticeably changed since June 1, 2016.

This figure is taken from Wilson et al. [2021], a review article on Wind's 25+ years of observations. Despite its age, Wind is still used to do really great science and its diversity of instrumentation makes it a tremendous asset to the heliophysics and astrophysics communities.

You can find all the orbit information you need from https://spdf.gsfc.nasa.gov/data_orbits.html. Much to my disappointment, I too could not find Wind in the Horizons app (as of Feb. 7, 2022). I had asked the folks at JPL in the past to add Wind and I thought it had been done, but it appears not. So I asked again just now.

Where is the Wind going?

Nowhere at the moment (or in the planned future). Wind was inserted into a halo orbit from a Lissajous orbit to avoid going into the solar exclusion zone – region around solar disk full of radio noise preventing telemetry signal locks from the Deep Space Network (DSN). DSN folks tell us this is a ~2 degree disk but they have managed to work their "magic" and still get telemetry locks as low as ~1.8 degrees.

In any case, the reason for doing this was to prevent a spacecraft reset. Wind is old, like really old! It was launched in 1994 and it records data on a fancy magnetic 8-track (I say fancy because I can't imagie any Radio Shack 8-tracks lasting 27+ years without any maintenance). So it does not have a lot of memory and because of that, it's "lifetime" without communication from the ground was set to be ~3 days (after this time it starts overwriting on the magnetic tape anyways). It also cannot hold enough commands to last indefinitely, so it requires DSN tracks every other day or so.

In late 2019 it was realized (well before this) that Wind would enter the solar exclusion zone and stay there for nearly 3 days straight before exiting. The baseline mission requirements for data acquistion is 90% per week. Losing three days of data would be bad, but the spacecraft going into a safe beacon mode would require weeks to bring it back up to nominal operations. Part of this is that the spacecraft is old and uploading spacecraft command tables (SCTs) to restart XYZ can be slow. Perhaps more importantly is that because of its age, it has a very low priority for getting DSN time (e.g., it's not a new and fancy Mars rover). So we'd only get a few hours per day to try and restart things and it can take quite a while to upload SCTs and wait for confirmation from the spacecraft that the upload worked properly and it is ready for new input.

In summary, the spacecraft was moved to a halo orbit to avoid this mess then and prevent it from happening in the future. Wind still has >50 years worth of fuel left after this rather large $\Delta v$ (large relative to it's normal maneuvers), which is much longer than that fancy 8-track is likely to last, unfortunately (that is our predicted single-point failure that gives me the cold sweats on nights I can't sleep).

Is there a tabular breakdown of what orbit's it has been in from launch until to today, and the plans for the future?* Something with dates and simple phrases that best describe its orbital status?

The projection on the XY-GSE (geocentric solar ecliptic) plane will not change much from the attached image. The YZ-GSE projection is now an ellipse around the Sun ($\leq$30 Earth radii along Z, $\pm$100 Earth radii along Y). The need for a solar wind monitor is great enough that there was/is no desire to move Wind from L1. So Wind will stay there until it runs out of fuel or stops responding to commands, in which case the orbit will decay and it will eventually become a Sun-orbiting spacecraft like ISEE-3 or STEREO.

This is not an answer yet - just a collection of resources. Please feel free to write your own answer, using the image if you like:

From the plots found at https://cdaweb.gsfc.nasa.gov/cgi-bin/gif_walk I created a gif containing the whole history of the past 26 years:

Earth is at the origin of the plot, Sun is towards the left. The two ellipses are some outline of the solar wind. The units are Earth radii. Moon's orbit is about +- 50 on the x axis. Each frame covers 180 days.

Some of the orbit changes are mentioned at https://directory.eoportal.org/web/eoportal/satellite-missions/v-w-x-y-z/wind .

Not the answer you're looking for? Browse other questions tagged orbital-mechanics mission-design trajectory solar-wind wind-spacecraft or ask your own question.

19
What artificial satellite has the farthest orbit around the Earth?
6
Why put DSCOVR in a Lissajous orbit? Wouldn't a halo orbit completely avoid the Sun exclusion zone?
2
Why hasn't DSCOVR's trajectory determination been updated in JPL's Horizons after 2015-Aug-4?
0
Has a spacecraft ever moved from one Earth-Moon halo orbit to another?

17
Are some Halo Orbits actually Stable? (stable orbits about unstable Lagrange points)
4
Do ("non-halo") Lissajous orbits have stable/unstable manifolds?
6
Why put DSCOVR in a Lissajous orbit? Wouldn't a halo orbit completely avoid the Sun exclusion zone?
5
Where did the Herschel Space Telescope go in 2013?
3
Was Queqiao in a halo or Lissajous orbit? Why do sources disagree?