What kind of thrusters will the James Webb Space Telescope use for station keeping?

Question is fairly self-explanatory, but I couldn't find an answer on Google. I would expect ion thrusters because of their efficiency.

Two sets of thrusters comprise the observatory’s propulsion system. The first is a set of Secondary Combustion Augmented Thrusters (SCATs) that are the main thrusters for the MCC maneuvers. The SCATs are bi-propellant thrusters and draw from two separate tanks for a hypergolic reaction. Two pairs of SCATs exist: one for MCC-1a and -1b, and one for MCC-2. The MCC-2 SCAT is also employed in station keeping throughout the life of the mission. Two pairs are required because the center of mass of the observatory changes between MCC-1b and MCC-2 because of the sun shield deployment; the thrust vector from a SCAT is directed through the center of mass at the time of that maneuver. Each pair is composed of a primary and a redundant thruster (the respective thrusters are coupled to the prime and redundant flight systems; only one system is on at a time). SCAT 1 and 2 are the primary and redundant pair for MCC-1a/b while SCAT 3 and 4 are the primary and redundant pair for MCC-2 and stationkeeping. For a given maneuver only one SCAT is on throughout that maneuver. The second set of thrusters is composed of eight Dual Thruster Modules (DTMs), each comprising of a primary and redundant Monopropellant Rocket Engine, 1 lbf, (MRE-1) thruster. A schematic of the propulsion system appears in Fig. 3. The MRE-1s consume hydrazine fuel only (and no oxidizer) from the same tank as the SCATs. The MRE-1s are subdivided into two sets: MRE-1s 1 through 4, which are directed generally along the observatory J3 axis for pitch and roll control, and MRE-1s 5 through 8, which are directed radially about the J3 axis for yaw control [3]. A picture of the spacecraft bus with the body J frame and orientation of the SCATs relative to the J frame appears in Fig. 4. Together, the MRE-1s on-pulse throughout a maneuver to control the attitude. Because of the location and alignment of MRE-1s 1 through 4, any firings to control pitch and roll during a maneuver may result in an additional ΔV to the MCC maneuver. Therefore, thrust contributions from the MRE-1s must be included in the design of the MCC maneuver. 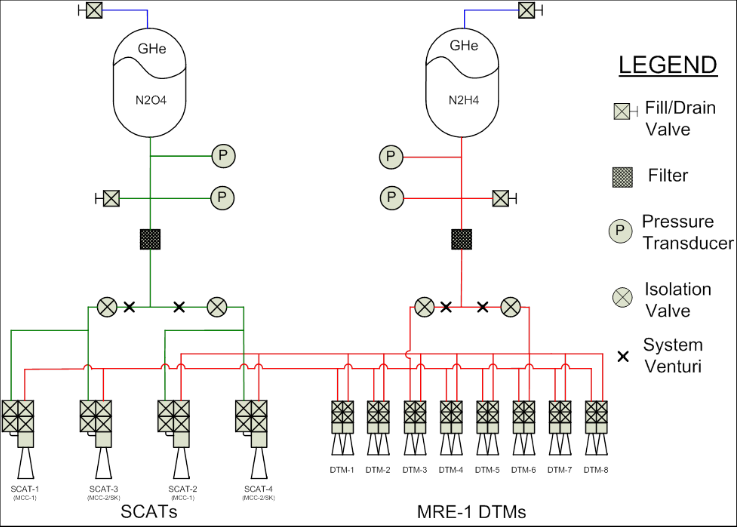 I wanted to share this as it describes JWST stationkeeping thrusters in detail, and as you can see in text and the attached images:

Not the answer you're looking for? Browse other questions tagged propulsion fuel attitude station-keeping james-webb-telescope or ask your own question.

10
Is it possible to refuel the James Webb Space Telescope?