What is NASA doing to improve the supersonic parachute for the third LDSD test?

Last month, on June 8, 2015, NASA ran the second Low-Density Supersonic Decelerator (LDSD) flight test off the island of Kauai, Hawaii. The inflatable decelerator portion of the test was successful, but the supersonic parachute shredded as it opened, similarly as it did during the first flight test.

Do they know specifically why it shredded when it opened, and what are they doing to improve it for the next year's third LDSD flight test?

The third test of the Low-Density Supersonic Decelerator (LDSD) never occurred, the program was cut as part of a budget shortfall in 2016. However the paper "Reconstructed Parachute System Performance During the Second LDSD Supersonic Flight Dynamics Test" provides an in-depth analysis of the parachute system during the test including some great graphics like this: 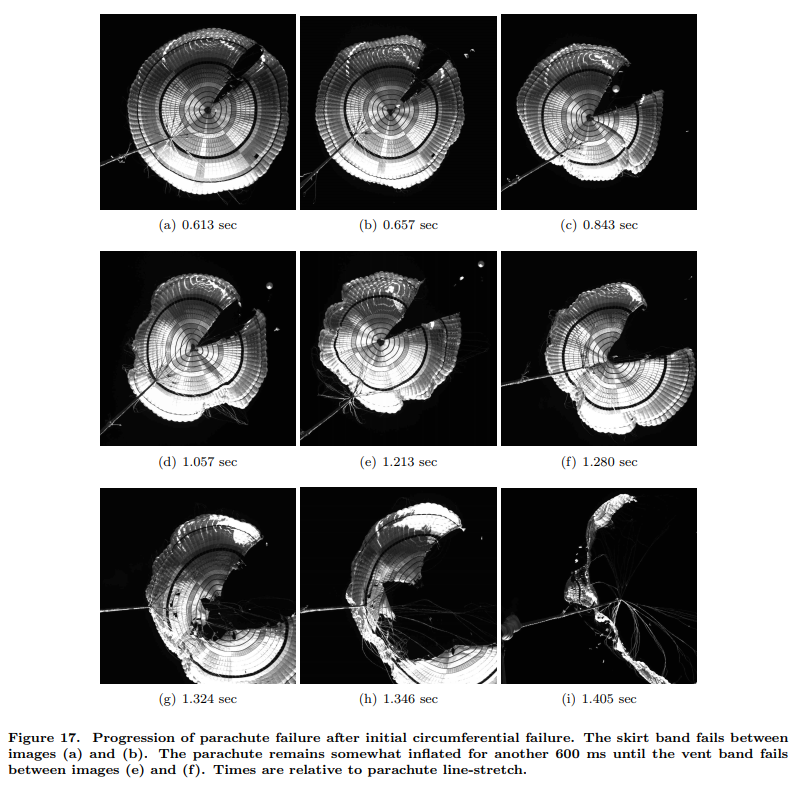 Here is the relevant section of the paper discussing the cause of the parachute failure:

As a result, the project has undertaken the following steps to determine the cause of the failure and to to improve the analysis of loads and margins on future designs:

In summary, LDSD had the following implications on heritage methods used to verify that a parachute could survive asupersonic inflation at, or below, its flight limit load:

Not the answer you're looking for? Browse other questions tagged nasa materials testing parachute ldsd or ask your own question.

25
How did the tangential thrusters for the 2014 LDSD test spin-up then spin-down so nicely?
4
Modelling for the LDSD parachute - what are the issues with scale models and software simulations?

16
What are the disadvantages of parachute+airbag for atmospheric landing, versus rocket-based?
4
Modelling for the LDSD parachute - what are the issues with scale models and software simulations?
5
How far can the supersonic parachute in the LDSD system for Mars be placed from the entry capsule?
4
What is the advantage of doing a static test fire before launch?
25
How did the tangential thrusters for the 2014 LDSD test spin-up then spin-down so nicely?
3
What exactly is a “Green Run test” for SLS that NASA is considering skipping?
1
Is the Low-Density Supersonic Decelerator scheduled for any upcoming Mars mission? Is the program still active?
23
What skipped test on Genesis would have detected the backwards-inserted accelerometer which didn't deploy the parachute?
6
What is the heaviest object to have been returned to Earth with a parachute?